'Gigantic' blaze rages on at fuel depot near Ukrainian capital

More than 60 firefighting units have responded to a fire at a fuel depot near Kyiv following an explosion at the site. Police believe the incident was due to a technical fault but have not ruled out other possibilities. 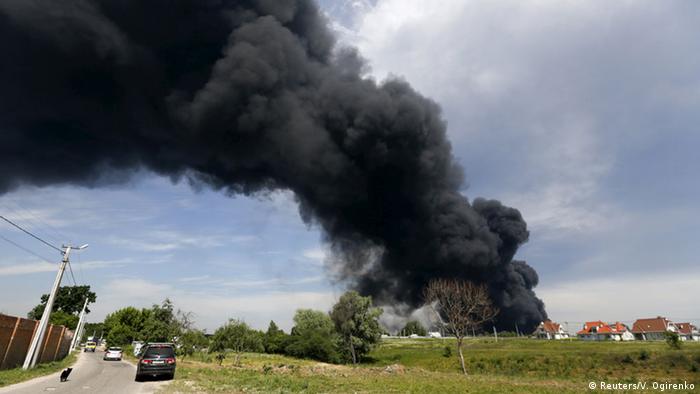 Several firefighters were killed after responding to a blaze that erupted last night on the outskirts of Ukraine's capital Kyiv.

At least sixteen tanks, many of them storing petrol, were on fire at the depot located in Vasylkiv, approximately 30 kilometers (19 miles) away from the nation's capital.

More than 60 fire-fighting units and three trains transporting water responded to the blaze, emergency services ministry said in a statement.

"As of 7:00 a.m. (4:00 UTC), efforts to fight the fire are still going on. The fire extended over eight tanks with a capacity of 900 cubic meters and several small containers," the ministry said.

"In the area of the blaze, there is another fuel depot. All people have been evacuated and a cordon is being setup," Interior Minister Arsen Avakov said in a tweet.

A number of firemen died while fighting the "gigantic" blaze, though only one has been confirmed, Avakov said.

At least five workers were injured and one died after reaching the hospital, police said.

Police noted that the blaze spread after a fuel tank exploded, adding that the incident was likely due to a technical fault but that other possibilities had not been ruled out.

Local media reported that a column of black smoke had risen to 200 meters (656 feet).

The fuel depot was owned and operated by BRSM-Nafta, a Ukrainian tank company that distributes gasoline and diesel throughout the country.