The meter-tall "Heracles inexpectatus" roamed New Zealand nearly 20 million years ago. Scientists say it may have eaten other parrots with a beak that "could crack wide open anything it fancied." 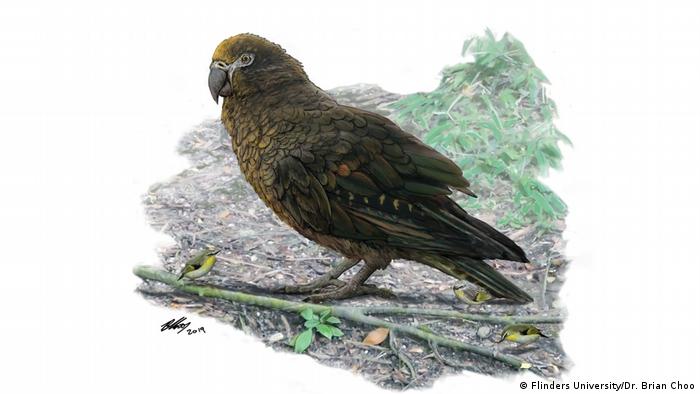 Scientists in New Zealand have uncovered the remains of a gigantic parrot that roamed the country some 20 million years ago.

The ancient bird stood up to a meter (39 inches) tall and weighed up to seven kilograms (15.5 pounds), an international team of researchers wrote in an article published in Biology Letters.

"Heracles, as the largest parrot ever, no doubt with a massive parrot beak that could crack wide open anything it fancied, may well have dined on more than conventional parrot foods, perhaps even other parrots," said Professor Mike Archer from the University of New South Wales in Australia.

The research team found the bird's fossils near a mining town on New Zealand's South Island 11 years ago. They only realized what they were after re-examining the remains earlier this year.

"The thought they were from a giant parrot did not enter our minds. We thought it could be some type of eagle until we went back and looked at it again," Paul Scofield from New Zealand's Canterbury Museum told the AFP news agency.

Paleontologists from Flinders University in Australia and the Canterbury Museum have named the parrot "Heracles inexpectatus."