It was back to the drudgery of the league day-job on Saturday, after the two German sides who celebrated a triumphant mid-week win in the Champions League had to pull off hard-fought wins in the Bundesliga. 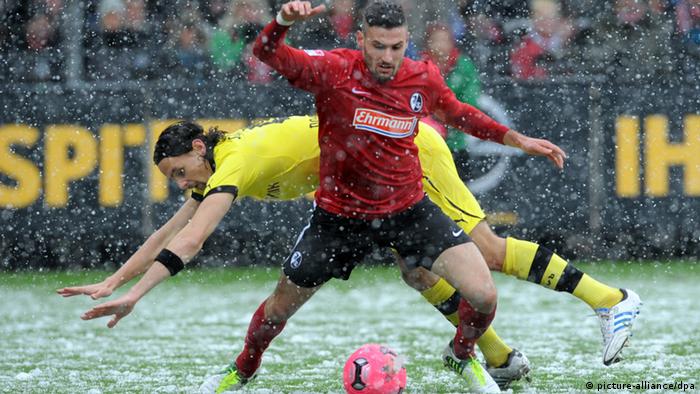 Dortmund - coming off a famous 2-1 victory over Real Madrid - took on eighth-placed Freiburg. And it was a cold shock for the German champions, who had to struggle through some rather unseasonal October snow for their 2-0 victory at the Maga Solar stadium in Freiburg.

It was an ugly game, as the weather seriously limited both sides' considerable technical skills. Countless passes went astray in the first half, and neither side managed to get the garish pink ball close to the line. 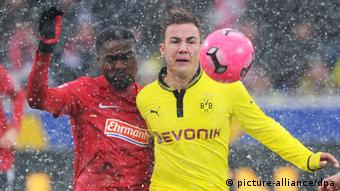 The hosts Freiburg came the closest in the first half, when a corner was headed goalwards and looked to be sneaking in through the blizzard, only for Marcel Schmelzer's outstretched toe to direct the ball against the post.

But it was Dortmund who took the lead as the second half got under way, and as the bleak weather continued it was no surprise that it came from a set-piece. A brilliant free-kick from Marco Reus out left found Neven Subotic in the penalty area, who guided the ball into the far corner by deftly letting it slide across the top of his head.

As the snow began to melt, Mario Götze finished the game off in the 83rd minute, with one of Dortmund's trademark slick midfield moves - this one involving Robert Lewandowski and Kevin Grosskreutz.

Schalke, meanwhile, had to follow a tremendous performance in London, where they beat Arsenal 2-0 on Wednesday, by facing lowly Nuremberg. The Royal Blues made heavy work of their 15th-placed opponents, despite controlling 60 percent of possession. 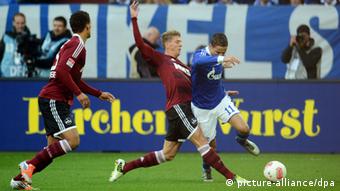 Schalke waited until the 77th minute to beat Nuremberg

It was left to Jefferson Farfan to make the difference in the 77th minute, when the Peruvian striker found himself free in the penalty area. He produced a fantastic, sprawling left-foot volley to put his side second in the league, at least until Sunday, when Frankfurt take on Stuttgart.

The 1-0 victory rounded off a memorable week for Schalke, which began with their victory over local rivals Dortmund last Saturday.

Struggling debutantes Greuther Fürth had their own memorable moment in their 1-1 draw with visitors Bremen, when they scored their first ever home Bundesliga goal. It came through Edu, the striker they loaned from Schalke in the summer. The Brazilian was on hand to tap in a sweet low pass across the face of the goal in the eighth minute, with the Bremen defenders - particularly new Greek signing Sokratis Papastathopoulos - caught napping.

But that was as much as the Bavarian minnows showed in the first half, with Bremen increasing the pressure and creating several chances. They finally got their reward in the 44th minute after a divine move engineered by Zlatko Junuzovic, who found Marko Arnautovic on the right in the penalty area. His inch-perfect cross was just the right height to make things easy for Nils Petersen. But for all their dominance, the northern Germans could not add any more, and a lacklustre second half left the scores 1-1 at the end. 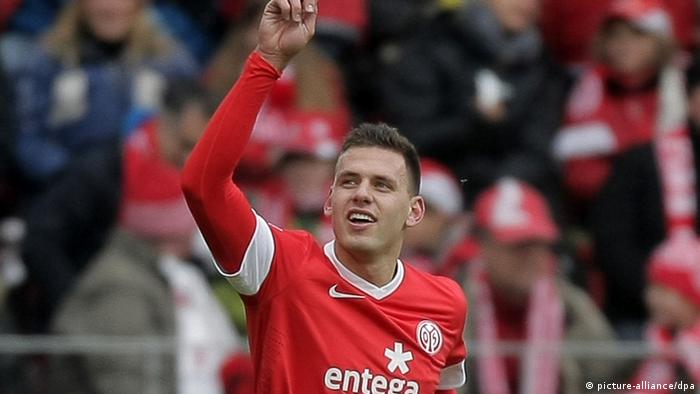 Mainz, meanwhile, deepened Hoffenheim's misery. Their 3-0 win leaves their opponents floundering in 14th place, with eight points from nine games - but even that is better than their hapless defense deserves. They have now let in 20 goals - easily the worst record in the league.

Mainz's first goal came in the 21st minute, through the free-scoring Adam Szalai, who registered his fifth of the season with a neat header past the increasingly miserable-looking goalkeeper Tim Wiese.

Szalai doubled the lead just 19 seconds into the second half, this time capitalizing on a slip in midfield to find himself with a one-on-one with the goalkeeper. The Hungarian completed his hat-trick in the 64th minute with another header, when the Hoffenheim defenders once again opted to leave Mainz's most dangerous player unmarked in the box. 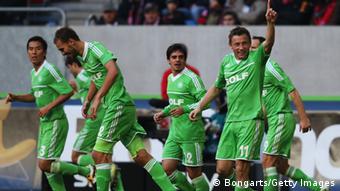 Meanwhile, Wolfsburg - who had the weakest attack in the league going into this week's games - got a new-coach-bounce away in Düsseldorf. After the club sacked Felix Magath mid-week, Wolfsburg looked unburdened as they trounced their hosts 4-1, with interim coach Lorenz-Günther Köstner on the bench.

At the start of the second half, they pulled off the impressive feat of scoring as many goals in four minutes as they'd managed in the first eight games of the season. In other words - two. The first of these came from Bas Dost in the 50th minute, after a sublime vertical pass from Jan Polak down the left found Ivica Olic at the byline, whose sharp cross got through to Dost.

The second was finished by Olic in the 53rd minute, when Diego stepped around Andreas Lambertz and sent a diagonal ball to the left post. Dost got his second eleven minutes later, before the hosts clawed a little hope back with a 70th minute penalty from Jens Langeneke.

The recovery lasted all of eight minutes for Düsseldorf, when a desperate Oliver Fink brought down Diego as he closed in on the goalkeeper. Diego took the penalty himself to complete the scoreline.

Kicking off the ninth match day of the Bundesliga, Hamburg travelled to Augsburg and made short work of their hosts. They move to fourth place for now, but there's a full weekend of Bundesliga soccer to come. (26.10.2012)

Can anyone catch up with Bayern Munich?

Will Bayern continue their winning streak? Did Schalke and Dortmund get a boost from their triumphs in the Champions League? Will Wolfsburg manage to turn things around now that unpopular coach Felix Magath is gone? (26.10.2012)

Borussia Mönchengladbach put two past Olympique Marseille on their way to their first Europa League victory of the season. Bayer Leverkusen and Hannover also earned important victories in the evening's European action. (25.10.2012)