A migrant ship, abandoned by human traffickers, has arrived in the southern Italian port of Corigiliano Calabro. Some 450 passengers were relieved to disembark the vessel after being stranded on board. 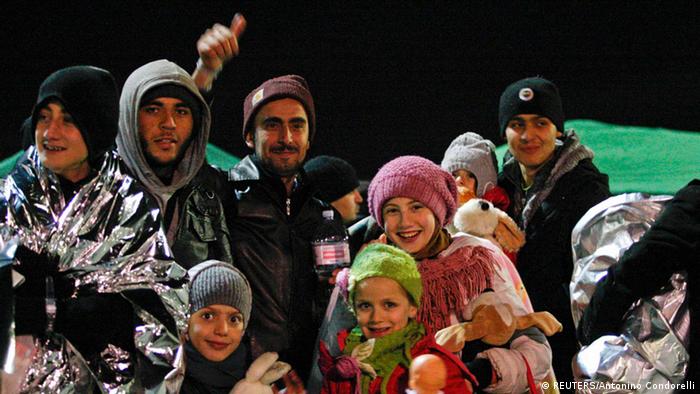 According to Italian media, most of the migrants found on the 73-metre-long (240-foot-long) "ghost ship" were from Syria, where millions of people have been displaced by nearly four years of civil war.

Italian sailors managed to take control of the crewless merchant ship earlier on Friday after six coastguards were lowered onto the ship's deck to set up a tow for the 40 kilometers (25 miles) to the Italian coast.

The Icelandic ship Tyr, which has been working as part of a new European patrol force to detect and aid migrants at sea, then towed the ship to shore.

Before running out of fuel on Thursday, the nigh-on 50-year-old ship had been moving at a brisk speed of seven knots and was spotted by a coast guard plane shortly after nightfall 80 miles offshore.

"We're without crew, we're heading toward the Italian coast and we have no one to steer," the woman said.

Abandoning a ship after setting it on a crash course appears to be a new technique adopted by migrant smugglers, Marini told Italian state radio.

This latest episode involving a migrant ship came just two days after Italian sailors intercepted a Moldovan-flagged freighter carrying more than 700 migrants that had also been abandoned by the crew. Again, most of the migrants were from Syria. The ship came within five miles of disaster before navy officers boarded and brought things under control.

2014 saw record numbers of people fleeing conflict and poverty in the Middle East, with more than 170,000 migrants being intercepted or rescued by Italian forces alone.