Ghani leads - but what comes next?

Preliminary results of last month's Afghan presidential runoff show former World Bank economist Ashraf Ghani is leading his rival Abdullah Abdullah. But whether the contenders will accept the result is another matter. 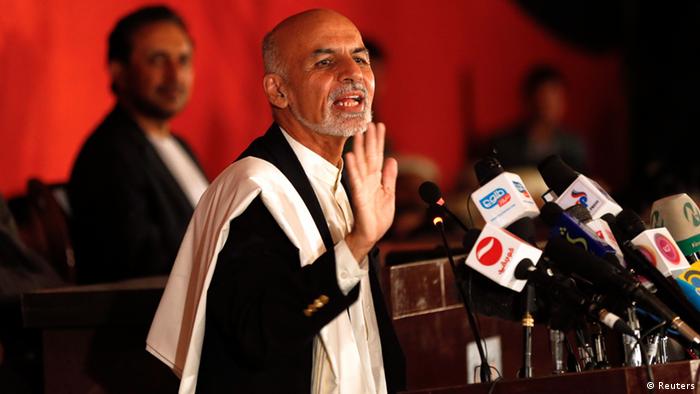 According to preliminary results, Ashraf Ghani had about 56 percent of the Afghan vote in the June 14 presidential runoff, while his opponent, former foreign minister Abdullah Abdullah, had 44 percent of the vote.

In the first round of the presidential election on April 5, Abdullah won most of the votes, but failed to get a majority. The turnout increased from 6.5 million people in the first round to 8.1 million last month, said Yousuf Nuristani, the chairman of the Independent Electoral Commission (IEC), in Kabul. However, Nuristani's statement also made clear that the announcement of preliminary results "does not mean that the leading candidate is the winner and there is a chance of change in the overall figure." The results were initially meant to be released on Wednesday, July 2, but they were delayed until this Monday, July 7. This was due in part to ongoing negotiations between the two presidential candidates and electoral officials, resulting in the recount of the votes of at least 7,000 polling stations.

Since tallying began in mid-June, Abdullah's team has insisted that the process has been fraudulent. Michael Kugelman, Afghanistan expert at the Woodrow Wilson International Center for Scholars, says that it is very unlikely that Abdullah will accept these results. "Abdullah has already been saying that he wouldn't accept the result, and unofficial reports are now circulating that he has lambasted it as a complete fraud."

In late June, the former foreign minister released audio recordings which allegedly reveal conversations between Ghani's team and members of the electoral commission. The tapes were meant to prove that Ghani had made a backroom deal with the Election Commission. Ghani's team, however, spoke of a fair election, stressing that the electoral schedule be followed.

Last week, the IEC announced its intention to review the results from about 2,000 out of 23,000 polling stations, causing the delay of the announcement. The observers of the European Union are still skeptical about the vote re-counting.

Ghani's win is 'only a partial victory'

Ashraf Ghani has won Afghanistan's presidential election, according to preliminary results. But as analyst Graeme Smith tells DW there is a long way until the final results are accepted by both candidates. (07.07.2014)

Preliminary results show that Ashraf Ghani has emerged as the winner of the Afghan presidential vote. But the dispute over the credibility of the electoral process poses a potential danger, writes DW's Florian Weigand. (07.07.2014)

As the candidates wrangle over alleged fraud, the Afghan election commission has delayed election results until Monday. But Thijs Berman, the EU's chief election observer, has doubts about the quality of the fraud probe. (03.07.2014)

"We are of the opinion that the IEC audit currently being performed is going too fast," said Thijs Berman, the EU's chief election observer, in a DW interview. "Our observers have seen how fast each ballot box is being checked without giving enough time to ensure the veracity of each vote. This has been the case in Kabul where we have observers present and I am concerned about the process in provinces where there are no observers," he added.

The Independent Election Commission emphasized that they would not give in to external influences. Abdul Sattar Sadat, chairman of the Electoral Complaints Commission, said in a press conference that they had the situation under control. "The vote is over, but it is clear that there has been vote-rigging. Both commissions must be able to tell the difference between the valid and invalid votes, but there shouldn't be any external interference."

Analysts are skeptical however, especially as the turnout was much higher than expected. Kugelman says "eyewitness accounts reported significantly lower turnout in the runoff than during the initial round of voting. And yet election officials have claimed that more people voted in the runoff than in that previous round.

The expert points out that initial readings of the preliminary results suggest that in some provinces, there were more votes than eligible voters. "That's not a good sign as the numbers simply don't add up," he said, adding that these findings could trigger more fraud allegations.

A stable transfer of power?

Initially, the electoral process seemed to be going well. Despite massive threats from the Taliban, some 6.5 million people took to the streets to cast their vote on April 5. Given the relative success of the first round, many Afghans expected a fair and accurate result from the second round. But this hasn't been the case.

Kugelman argues that: "The only way in which Abdullah could accept the result - assuming the final results confirm his defeat - is if he were to conclude some sort of power-sharing deal with Ghani that gives Abdullah a prominent role, presumably a minister portfolio, in a Ghani-led administration.”

"However, considering the vitriol that pervaded the last few weeks of campaigning, and given Abdullah's multiple categorical rejections of the electoral process, it seems he will be more interested in protesting a disputed outcome than in trying to work out a deal," then Washington-based analyst added. 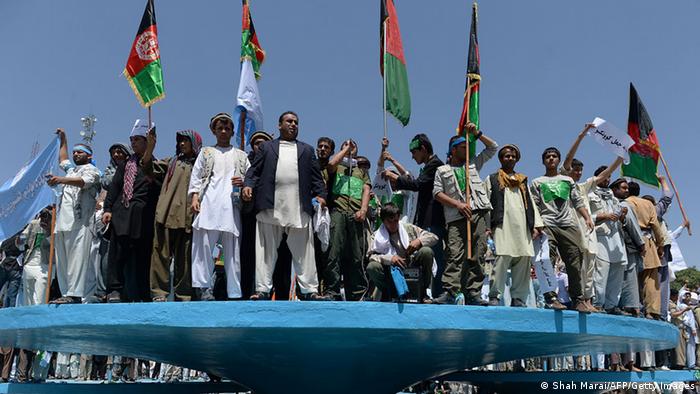 "The timetable is still crucial and it's not just that Afghanistan is in limbo at the moment," says Kate Clark

The prolonged war in the southern province of Helmand, combined with the drawdown of international troops and the not-yet-signed Bilateral Security Agreement (BSA) with the United States are some of the urgent issues awaiting the new president. Any significant delay in the electoral calendar will make it increasingly difficult for the US and NATO to keep troops in the country after the end of the year.

Stability is paramount. "The timetable is still crucial and it's not just that Afghanistan is in limbo at the moment," says Kate Clark from the Afghanistan Analysts Network, an independent think tank. Afghanistan is dealing with a set of issues serious at the moment, ranging from an economic slowdown, an increasingly aggressive Taliban and the looming withdrawal of international forces.

As Clark points out, Afghanistan "can’t reach a new military agreement with the US without a new president. That means the country hasn’t got all time of the world to get a new leader. At the same time, cleaning up the vote, getting an audit and consensus will probably take time. Afghanistan needs a leader with legitimacy from the ballot."

Azita Rafat, spokeswoman for the Ghani campaign said: "We welcome the provisional election result and hope that Abdullah's team will rejoin the electoral process and thus prevente a crisis in the country." In two weeks, on July 22, the official results will be announced, declaring the new president of Afghanistan, which will be sworn on August 2. Whether the loser will accept the result is still unclear.