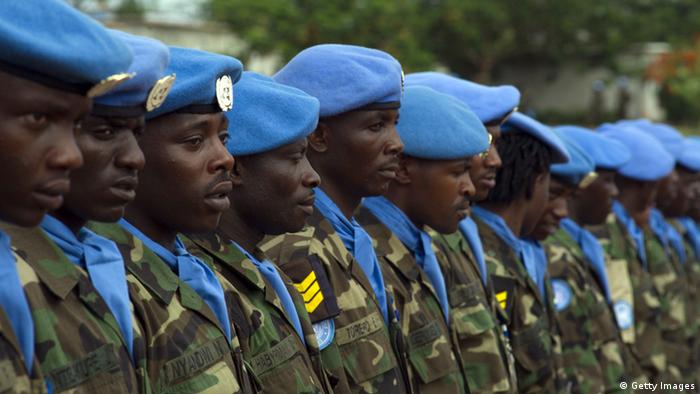 The boxes were labeled as carrying construction material, yet they contained arms. While Ghana claims that they were headed for Ghanaian forces supporting the UN peacekeeping mission, South Sudan suspected the UN of arming the rebels. DW spoke to Ghana's Defense Minister, Mark Woyongo, who has now sent a delegation to South Sudan to negotiate a release of the weapons.

Deutsche Welle: The soldiers have been in South Sudan for two months now. Doesn't this endanger their mission?

Mark Woyongo: Certainly and that's why we are expressing concern about the fact that they are not allowed to open the containers, so that they can have access to their weapons.

Why hasn't Ghana done anything until now?

Well, its a long process. The containers were seized because they were mislabeled by the UN. It is not our responsibility to convey the containers to the peace-keeping destination. It is the responsibility of the United Nations to do that and they didn't. They conveyed the containers from Ivory Coast to South Sudan. In the process they labeled them as construction material. They were then received by the South Sudanese authorities.

When we got this information, I spoke to my president and my president spoke to his counterpart in South Sudan and the containers were released. When they were released, they realized they contained arms and ammunition and they became suspicious. That is why they placed an embargo on them.

When that came to my attention, I invited the Ambassador of South Sudan to my office last week. We had a chat and we are following it up with a powerful delegation to South Sudan to make a case for the release of the weapons.

They were going there for peace-keeping, so I don't know why they labeled them that way. The team will find out from the UN representative why they were labeled as construction materials. I can't tell you from here. We didn't label them.

South Sudan later accused the UN of wanting to arm the rebels. Were those accusations justified?

I cannot tell and that is why we need to go and find out.

If the UN shipped the containers, why did they not go and tackle the matter?

The delay in sorting out the matter by the UN – that is why we are involved. Because it concerns our soldiers and we cannot afford to toy with the lives of our soldiers. That is why we are taking the initiative to go to South Sudan, meet with the officials and the UN and unravel all this.

What is your message to the UN – you are probably furious that they have not done anything.

Since I have not heard from the UN, there is not much I can comment on. I am only hoping that the UN will play an active part in getting the South Sudanese authorities in getting the weapons to the Ghanaian contingent. That is my hope.

Presidential elections in South Sudan due next year will be postponed, the government has announced. It comes amid severe ethnic-based violence resulting from a top political power struggle. (12.05.2014)

South Sudan's President Salva Kiir and rebel leader Riek Machar had barely agreed on a cease-fire when only a few hours later both sides accused each other of violating the agreement. (12.05.2014)

On a six-day visit to Africa US Secretary of State John Kerry has met with regional politicians to discuss the situation in South Sudan which, he says, faces the threat of genocide. (01.05.2014)