A judge has dismissed the case against more than a dozen activists involved in Turkey's 2013 anti-government demonstrations. The accused were leaders of Taksim Solidarity, originally an environmental group. 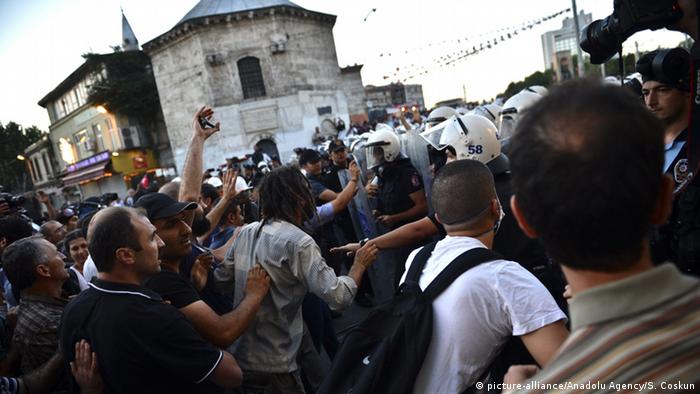 Twenty-six activists were acquitted by an Istanbul court on Wednesday of charges stemming from the 2013 mass protests (pictured above) against Turkish President Recep Tayyip Erdogan, then prime minister. All of the protestors were leaders of the group Taksim Solidarity, an umbrella group of civil society, labor unions, and political groups at the forefront of what amounted to the biggest challenge yet to Erdogan's administration.

Amongst the activists were doctors, architects, and engineers, and the charges ranged from violating public order to organizing illegal protests. The top five leaders of the group were charged with forming a crime syndicate, which carries a lengthy prison sentence if convicted.

Taksim Solidarity was originally founded to protect Gezi Park, a rare spot of green in Turkey's mega-city, from being turned into a shopping mall. The Gezi Park demonstrations swiftly morphed into nationwide anti-government protests which left several people dead and thousands injured.

The 26 acquitted were rounded up in the aftermath of the protests and subjected to what Amnesty International called a "politically motivated show trial" beginning in June 2014. Amnesty's Turkey expert, Andrew Gardner, welcomed the acquittal but said that the "case should never have come before the court in the first place," adding that "the right to peaceful protest was on trial."

Rights groups like Amnesty and Human Rights Watch accused the state of using public resources to hound protesters and the press through the courts while ignoring police abuses.

The judge who dismissed the case told the court he would publish a reason for the verdict sometime in the future.

Turkey will head to the polls for parliamentary elections on June 7, and the ruling Justice and Development Party (AKP) is fighting to maintain its position of power.

'Turkey is shooting itself in the foot'

Turkey has badly hurt its international ties by threatening Germany and other partner nations over their assessment of the Ottoman massacre of Armenians a century ago, DW's Thomas Seibert says from Istanbul. (26.04.2015)