Designed by "starchitect" Richard Meier, the Arp Museum opened five years ago. A new exhibition of Meier's work has just gone on display there, charting his phenomenal career which began in Germany. 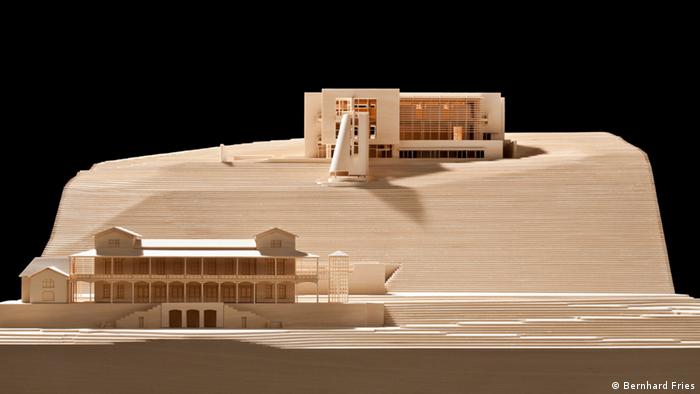 All the excitement seems to make Richard Meier uncomfortable. But at the age of 77, he's happy to congratulate "his" museum on its fifth birthday in person.

He wanders through the exhibition dedicated to his work at the Arp Museum Rolandseck with the aid of a walking stick. The best example of his work is the museum itself.

It's the first time he's been back since its opening five years ago. The building looks like it was just finished yesterday, he said, looking out over the gentle curve the Rhine River forms at Rolandseck in the western German state of North-Rhine Westphalia, where the museum is located. 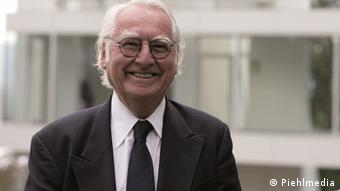 Stepping out of the historic train station, Bahnhof Rolandseck, visitors first have to crick their necks to see the cubic museum between the trees. However, the best view of the snow-white building is reserved for the ships sailing by along the Rhine.

The small locality of Rolandseck is just a short drive or train ride to the cities of Bonn and Cologne.

The museum hasn't created the so-called Bilbao Effect of attracting visitors with its spectacular architectural form alone. But among architects, the building is considered to be one of the most original pieces of architecture in Germany.

The Arp Museum was financed with money from the state compensation fund, an indemnity for transferring the government from Bonn to Berlin after German reunification.

The new exhibition is a zigzag tour through Meier's career, with museum designs forming the focal point: The Museum of Applied Arts in Frankfurt, the Museum of Art Baden-Baden, the Paul Getty Center Los Angeles, the Barcelona Museum of Modern Art and, of course, the Arp Museum. 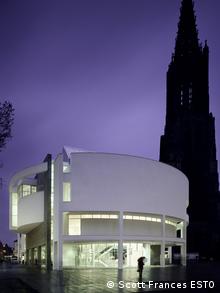 Meier's Stadthaus in Ulm, an exhibition center and assembly hall, opened in 1993

Meier has realized a total of 14 projects in Germany. When the Museum of Applied Arts opened in Frankfurt, it quickly became a pilgrimage site for architecture fans around the world.

Looking back, Meier is grateful for the opportunities he had, particularly early on in his career: "I was very fortunate because the first building in Germany was the Museum for Applied Art, which was a competition that I won. After that I was invited to do other competitions. There's an appreciation for architecture in Germany that doesn't exist in many other places."

His museum designs stand in contrast to the private villas he designed in the 1960s and 70s. The public projects played the most important role in his work, said Meier, because they were accessible to the wider public.

"For me, it's the public buildings that are the most meaningful. They have a life which is ongoing and changing, because the public changes.," Meier explained.

Richard Meier is part of the legendary New York Five - a group of five architects committed to the renewal of modernity. The "starchitects" have realized around 250 buildings around the world. How 15 of them came into being is documented in the exhibition "Building as Art" at the Arp Museum Rolandseck.

Meier is interested above all in openness, the fluid passage from one room to another, but also the clarity of form exemplified by Le Corbusier. The interiors and exteriors of his buildings work in symbiosis. They acquiesce to their spatial surroundings without being obtrusive. 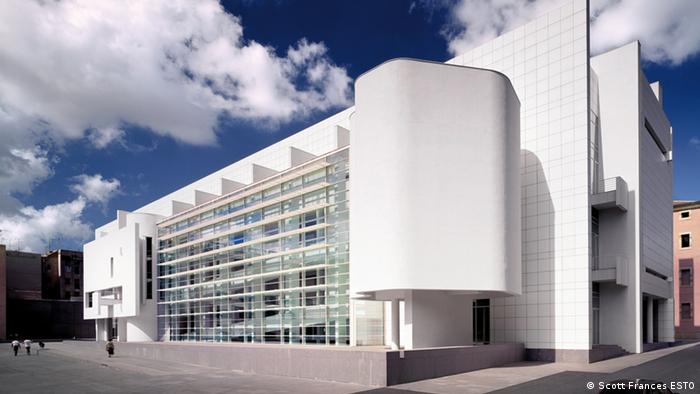 Self-made wooden prototypes from Meier's private museum, never before shown in public, document the planning phase. These include ideas for the Arp Museum.

To begin with, an over-ground bridge was designed to connect the Arp Museum with the nearby 19th-century train station. The bridge was never realized, due to technical reasons. There is now a tunnel instead.

The path for visitors to the museum also plays a central role in the Getty Center in Los Angeles, situated in the mountains of Santa Monica: Visitors take a steep tramway to reach the museum buildings.

Another hallmark of Meier's designs is that, with the exception of the Getty Center, all of his buildings are white. The American architect wants to incorporate the continually changing colors of nature in his deigns.

"Whiteness enables you to see the changing colors of nature because it reflects and refracts the colors," he explained. "The building doesn't absorb those colors, but lets you appreciate the colors. There is so much color around and I want to let people appreciate that."

Alongside the wooden models, the exhibition also includes sketches and numerous photographs. It shows the recurring themes in Meier's oeuvre: passage, light, color, proportion and context.

For Meier, architecture is also art, like a multifaceted sculpture, captivating viewers from every angle anew.

German professor Georg Pegels believes half-timbered houses - like the medieval homes tourists come to see in the German countryside - can save lives in earthquake prone regions. He told DW about his plans for Iran. (20.09.2012)

Time is running out to celebrate Ludwig van Beethoven's 250th birthday in style. By the anniversary 2020, the city of Bonn wants to dazzle with a new, top-class festival performance hall. (13.09.2012)

Humans need to feel part of a crowd and stadiums meet that need, says architect Volkwin Marg. In designing the EURO 2012 stadiums in Warsaw and Kyiv, he made sure their deeper historical meaning was preserved. (11.06.2012)