The icon of 20th-century literature, who died 75 years ago, was a Jewish-American lesbian author and art collector — who also had ties with pro-Nazi officials. 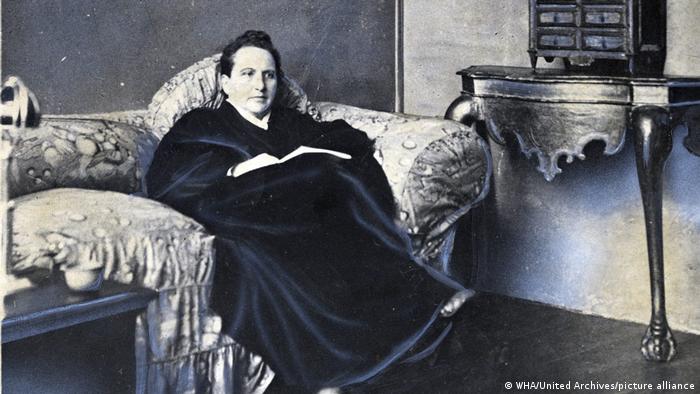 Gertrude Stein definitely lived a storied life: Remembered as a language innovator, lesbian role model, feminist pioneer and literary anarchist, she hosted in her Paris apartment avant-garde authors and artists such as Hemingway, Fitzgerald and Picasso.

But along with her progressive lifestyle, the Jewish-American experimental writer and art collector also developed ties with a powerful Vichy government official and Nazi collaborator during World War II — a close friendship which presumably saved her life and her exceptional art collection. That darker part of her biography was long overlooked in her legacy.

Early explorations in psychology and medicine

The youngest of five children, Stein was born on February 3, 1874, in Allegheny, Pennsylvania, to wealthy immigrant parents of German-Jewish ancestry.

In 1893, Stein enrolled at the Radcliffe College, the women's liberal arts college in Cambridge, Massachusetts, that was the equivalent to the then all-male Harvard College.

She studied psychology there for four years, graduating in 1897. One of her lecturers was William James, a thinker renowned as "the father of American psychology" and brother of the novelist Henry James. He led her to explore the phenomenon of the stream of consciousness, which is seen as having marked her modernist writing style.

She later enrolled at the Johns Hopkins University School of Medicine in Baltimore. Though she first did well, she eventually lost interest and didn't graduate. Instead, she moved to Paris, where her brother Leo was already living and collecting art. 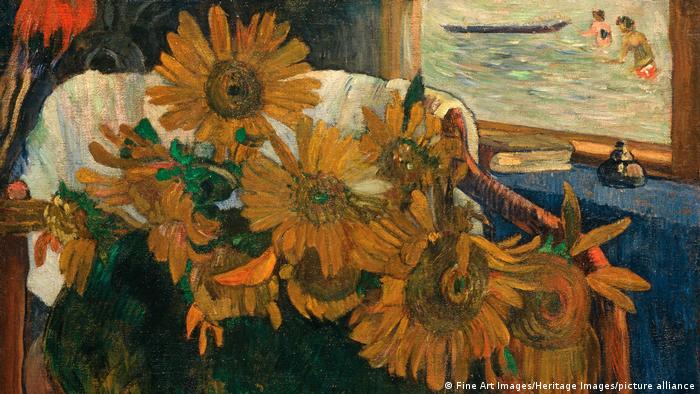 Savvy art lovers, the siblings collected paintings by well-known artists like Cezanne, Renoir, Manet and Gauguin. But they also bought works by then "unknown" painters. This included early Cubist paintings by Picasso, Georges Braque and Juan Gris, as well as Expressionist pictures by Henri Matisse.

A 1968 article in The New York Times described their apartment on 27 rue de Fleurus on the left bank of the Seine River as the "first modern art museum."

"Everybody brought somebody, and they came at any time, and it began to be a nuisance and it was in this way that Saturday evenings began," Stein later wrote in The Autobiography of Alice B. Toklas. 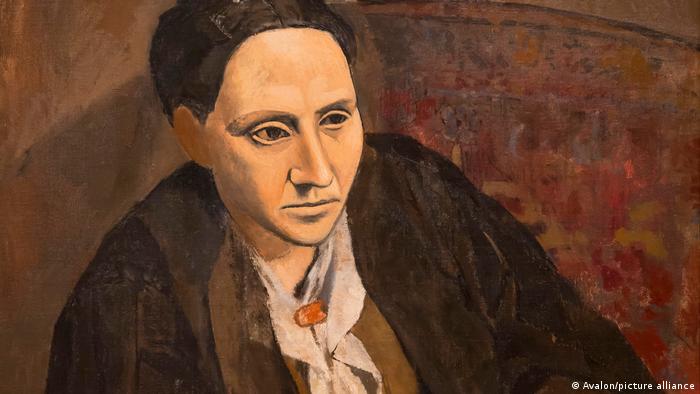 Picasso's portrait of Stein: a foretaste of his experimentation with Cubism

Picasso started to work on a portrait of Stein shortly after they first met in 1905, in gratitude for her patronage. Stein famously sat up to 90 times for the Spanish master before he was satisfied with capturing her personality — not her looks — on canvas.

Many however saw little resemblance to Stein in what was a foretaste of Picasso's experiments in Cubism. Picasso allegedly replied, "Never mind, in the end she will manage to look just like it."

Completed in 1906, the piece is now part of the permanent collection of the Metropolitan Museum of Art in New York.

'There is no there there'

Although Stein once claimed, "There is no such thing as repetition — only insistence," her most famous quotes feature recurring words, such as "There is no there there." The line, appearing in her memoirs Everybody's Autobiography (1937), is a reference to the author no longer being able to relate to her home town in Oakland, which had undergone extensive change.

Comedian Charlie Chaplin, whom she met during her six-month lecture tour in the US in 1934, would reference it in his 1952 film Limelight.

Recalling their meeting and referring to her proclivity for repetition, Chaplin later wrote in his autobiography, "She would like to see me in a movie, just walking up the street and turning a corner, then another corner, and another." 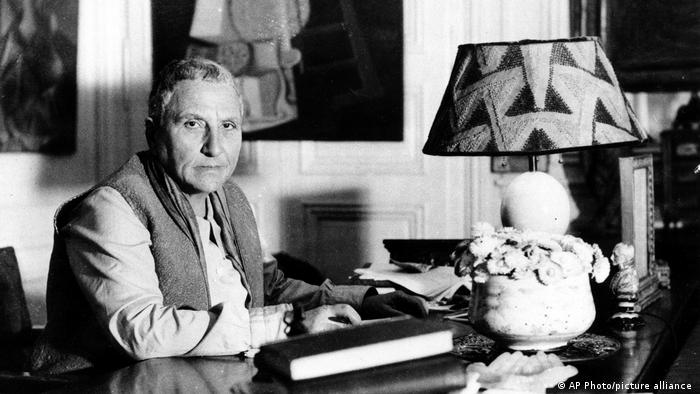 Stein sitting at her desk at her home in Paris, France

"Gertrude Stein Has Arrived": This was the sign that flashed in New York's Times Square greeting the author and her life partner, Alice B. Toklas, when Stein returned to the US after a 30-year absence for the publicity tour of her bestselling quasi-memoir.

She had already authored several books before this. They included Q.E.D. (1903), about a lesbian romantic affair involving several of her friends; Fernhurst, a fictional story about a love triangle; Three Lives (1905-1906); and The Making of Americans (1902-1911). Lesbian sexuality was the focus of Tender Buttons (1914).

However, it was The Autobiography of Alice B. Toklas that brought her literary fame.

The "witty, gossipy, and irreverent memoir" about her life in Paris was written from the perspective of her partner Toklas, turning them into the world's most famous lesbian couple at the time. Published in New York in 1933, it sold out nine days before publication and was reprinted four times in the two following years.

Stein's acerbic observations about some of her famous Paris salon guests didn't go down well, however.

Matisse was miffed at how she'd described his wife. Hemingway called it "a damned pitiful book" after being described as "fragile and yellow" in Stein's book. He would return the favor in his 1964 memoir A Moveable Feast, where he described Stein's prose as having "repetitions that a more conscientious and less lazy writer would have put in the waste basket." 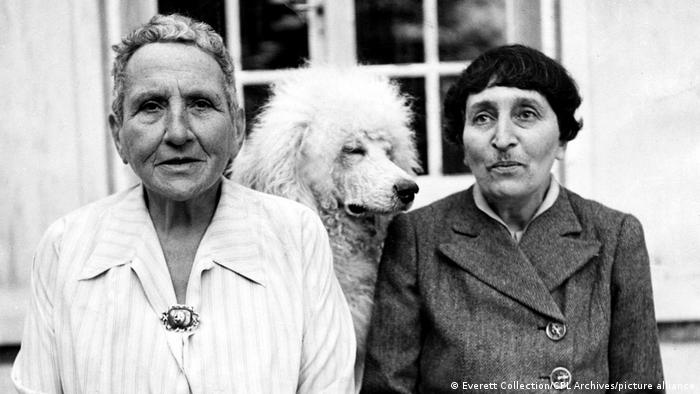 Stein is seen here with her life companion, Alice B. Toklas, in whose voice she wrote her literary breakthrough biography

During World War I, Stein and Toklas volunteered for the American Fund for the French Wounded, driving for miles to send supplies to French hospitals. The twist? Neither was particularly adept at the wheel. Both received the "Medaille de la Reconnaissance francaise", an honor given to civilians as a token of the French government's gratitude.

Her activities during World War II have been subject to more critical scrutiny. As a Jew and a homosexual living in Nazi-occupied France, she was advised to leave the country. Yet Stein and Toklas simply left Paris for Bilignin, which was in the Free Zone of Vichy. The Vichy Regime was a Nazi puppet government headed by former French general Philippe Petain — whose antisemitic speeches Stein translated to English.

She was also friends with Bernard Fay, another powerful Vichy government official, whose protection is believed to have kept her alive and whose influence ensured that the Nazis didn't loot her vast and valuable trove of artworks.

Stein died 75 years ago, on July 27, 1946 in France, at the age of 72. She is buried in the Pere Lachaise cemetery, alongside other luminaries like Oscar Wilde, Frederic Chopin, Edith Piaf, Amedeo Modigliani and Jim Morrison.

Picasso, the painter who obsessively portrayed the people he loved

The exhibition "Picasso Portraits" at London's National Portrait Gallery shows how much Pablo Picasso enjoyed portraying his friends and family members - but even more so his numerous lovers.