German Foreign Minister Guido Westerwelle has urged the Turkish government to alter its strategy after its most recent crackdown on protesters. He said images of overnight clashes were disturbing. 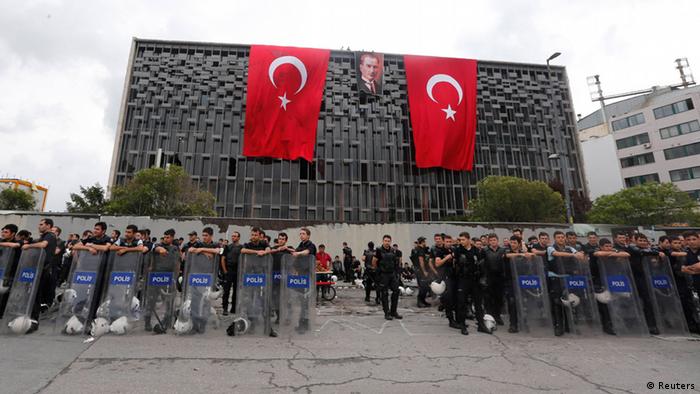 Westerwelle said on Wednesday that the Turkish government was sending the wrong message at home and abroad with its response to demonstrations.

The German foreign minister commented in response to overnight clashes in Istanbul, which saw police and demonstrators fighting running battles in the city's Taksim Square. Tear gas and water cannons were used, with protesters throwing missiles including Molotov cocktails.

"The images from Taksim Square are disturbing," Westerwelle said in a statement calling upon Turkish Prime Minister Recep Tayyip Erdogan to change direction. "The Turkish government is sending the wrong message to the country and to Europe with its response to date to the protests," he said, adding that Ankara must do "all in its power" to protect democratic rights.

"We expect Prime Minister Erdogan to de-escalate the situation in the spirit of European values and initiate constructive exchange and peaceful dialogue," Westerwelle said.

German Chancellor Angela Merkel made an appeal on Friday for Ankara to renounce violence against protesters after the deadly unrest claimed three lives. A further fatality amid the fighting has been reported since.

Merkel said at the time that Berlin was monitoring developments closely.

An uneasy calm had descended on the square by midday on Wednesday, with hundreds of officers armed with riot shields and backed by water cannon trucks cordoning off the eastern side of the square.

A large cleanup operation was mounted in the morning to clear the square of tear gas canisters, banners and barricades. Two large Turkish flags were draped in the square.

Demonstrators who had been forced out of the square by the police action overnight were huddled up in Gezi Park, the site of initial unrest.

Protests erupted on May 31 when police cracked down on a group of activists opposed to plans to develop the park into an Ottoman-styled building. Anger at the heavy-handed police response brought tens of thousands of anti-government protesters to the streets across the country.

They accuse Erdogan and his ruling Justice and Development Party (AKP) of being increasingly authoritarian and attempting to impose conservative Islamic values.