Some footballers have suffered major setbacks during the coronavirus pandemic, with contracts either canceled or not renewed. Many, including 19-year-old Nick Münch, are keeping fit thanks to professional training camps.

Nick Münch shouldn't be here at all. In sunny Duisburg, at the Wedau Sports Park, he and 24 others are sweating profusely in 35-degree heat.

Every player is currently unemployed and keeping fit thanks to a VDV (Association of Contracted Football Players) training camp. The players' union is preparing them for possible employment in their quest to assist professional footballers working in Germany.

When Münch's contract with St Pauli's second team was terminated in January this year, he trialed with a Slovakian first-division club. He made a good impression and a deal was agreed in principle between club and player. For the 19-year-old defender, a graduate from Schalke's famed "Knappenschmiede" academy, it would have been a positive step in his career.

But his prospects took a drastic turn as COVID-19 threw the football world into panic.

"I was supposed to train there for a week," Münch tells DW. "After three days, lockdown came into place. No football for the foreseeable future."

He was advised to return to Germany quickly, otherwise he would be stranded in Slovakia.

"Unfortunately, my chances were shattered by the pandemic. I drew the short straw."

Other players in the camp are in similar situations. Normally they would have been able to negotiate new contracts with clubs from the third division, or at least in the regional leagues. But the pandemic is making life difficult in the lower reaches of German football.

"The lower you go down, the more dependent you are on the number of spectators and the audience income," says exercise leader Peter Neururer. 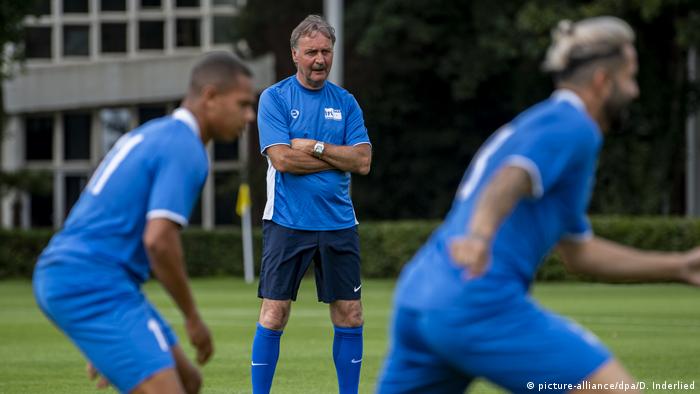 Peter Neururer puts his charges through their paces

"The income doesn't come in, so the money doesn't flow down, as it has in recent years. Belts have to be tightened."

Neururer has previously worked for Schalke, Hertha Berlin, Bochum and Hanover in the Bundesliga. He stepped into the role at the VDV camp at short notice, replacing Jürgen Kramny, who signed with Eintracht Frankfurt as their under-19 coach.

For Kramny, an ex- head coach at Arminia Bielefeld, it was his first job after three years of unemployment. This is what the camp in Duisburg is all about - providing a platform for professionals to showcase their talent and find work.

Every journalist and scout is welcomed warmly. Any kind of attention ultimately increases the chance of winning a contract and regular income again. There is a wide mix of players training together.

There's ex-Bundesliga player Marian Sarr, who was once on the books at Borussia Dortmund and most recently at Carl Zeiss Jena. And central defender Robert Müller, who at 33 years and with more than 300 third-division games under his belt, is the most experienced player at this year's course.

Getting up to speed

Most players, though, are like Nick Münch; young and largely unknown.

As soon as the balls are rolled out, everyone is happy, relieved to be able to train and play properly again. The times of lonely forest runs or stuffy hours in self-made weights rooms are finally over.

Many players' contract expired on June 30. Most haven't been able to train properly since the coronavirus delayed or canceled football leagues back in March. Until recently, only clubs in the top three divisions were allowed to play friendly or competitive matches in Germany. The camp provides an exit from the seemingly endless wait for work.

"If someone here from the VDV camp is invited to a professional club, they don't have to wait three to four weeks in order to be physically fit on the same level as the professionals already training with clubs," Neururer says.

The 65-year-old is also in a good mood. His last job at Wattenscheid 09 was an unhappy experience and he resigned after the fifth-tier club fell into financial problems. They later filed for bankruptcy. After that, no new offers came Neururer's way.

Founded by players for players

This is the 18th edition of the VDV camp. The players' union, founded in 1987, by then Bundesliga players Benno Möhlmann, Ewald Lienen, Guido Buchwald and Bruno Labbadia, has been a real success story. 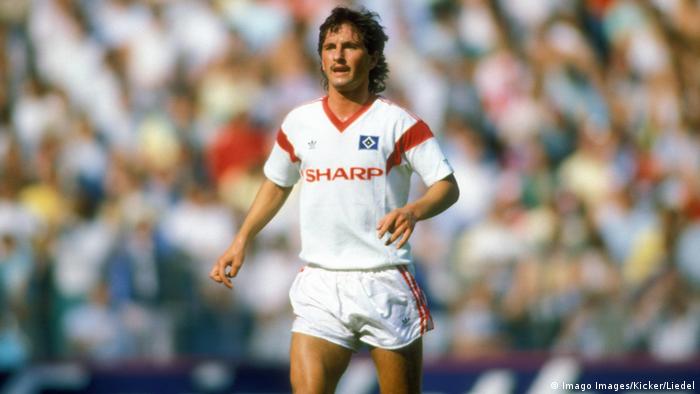 In addition to ideal training conditions at Duisburg's Wedau sport park, professional diagnostics, sports psychology, and career coaching are also offered. The statistics are there for all to see - about 80 percent of all participants in the camp have found a new club.

The real business only picks up speed at the end of the camp. Then friendly matches are held, usually against reserve teams from Bundesliga clubs or regional clubs who are in the middle of pre-season.

This is where the dual strategy comes into play. Like Neururer, goalkeeping coach Kay Hödtke (who coaches full-time at Wuppertaler SV in the fourth tier) and assistant coach Benjamin Skalnik (full-time at Fortuna Düsseldorf reserves) work on a voluntary basis during the three-week training camp.

But they also bring vital contacts from their previous gigs and often recommend standout players to clubs and colleagues.

At the same time, the player agents are also digging for new offers. A mixture of sporting directors, scouts and agents can be found at the friendly matches and also at training sessions. It can be a lucrative market, with the out-of-contract professionals available on free transfers. And they can be signed even after the transfer window closes, which is on October 5 in Germany this season.

An offer from north

Nick Münch is hoping he can find something before then.

"For me, it's now time to stick with it. I want to get into the professional field first. I've also put aside the financial aspect for the time being. There are already casual discussions with a club from the north."

Thanks to the training camp, talents such as Münch have an indirect route back into the professional side of the game. Despite the poor economic outlook for many smaller clubs and the uncertain future, this platform is helping players avoid the panic button.