An international troika of the European Union, Russia and the United States, should take charge of discussions on the final status of Kosovo, German Foreign Minister Frank-Walter Steinmeier said Monday. 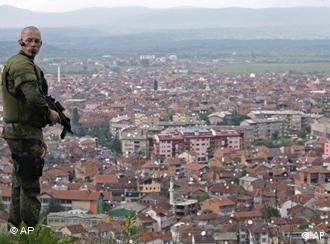 Soldiers under the UN's protectorate mandate have policed Kosovo since 1999

With time running out on a decision on the future of the Serbian province, Steinmeier said he wanted discussions on Kosovo to be led by a small team rather than the six-nation Contract Group composed of the US, Britain, Germany, France, Italy and Russia.

"I favor the concept of an international troika, made up of the US, Russia and EU, so with that we would have three international partners to negotiate with the Serbs and the Kosovars (ethnic Albanians)," Steinmeier told reporters at a meeting of EU foreign ministers in Brussels.

He said that such a troika offered the "best chance" to secure a so far elusive deal on Kosovo.

"I think that once Russia and the United States sit at the table together, there will be a very real possibility that the Kosovars and the Serbs will start acting the way they should," he said.

Others, also seeking to avert a Russian veto by putting preparations for the UN resolution on hold, have said discussions on Kosovo should be spearheaded by the Contact Group. 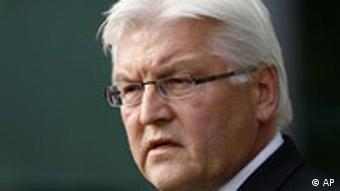 Steinmeier said there was also a suggestion that UN Secretary-General Ban Ki-moon should appoint a new envoy to replace Martti Ahtisaari to mediate between Serbs and Kosovars.

However, the proposed troika discussions would continue to focus on Ahtisaari's plan for supervised independence for Kosovo, Steinmeier added.

EU Enlargement Commissioner Olli Rehn also said the EU wanted to move forward on the basis of Ahtisaari's recommendation that Kosovo be granted "independence supervised by the international community."

"If the Contact Group is going to have further negotiations we are of course ready to contribute to those," Rehn told reporters. He warned that it is "essential that both parties including Serbia take finally a constructive and realistic approach to these negotiations."

EU officials, however, once again stated that if the troika proposal was rejected and the issue moved to the Contact Group, it would be a temporary solution and that the UN Security Council would have the final say to the status of Kosovo. 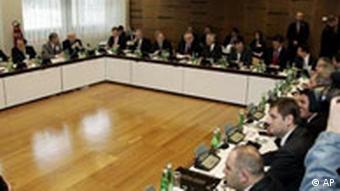 Serbia and Kosovo came to the table -- but agreed to nothing

Luxembourg's Foreign Minister Jean Asselborn also backed Steinmeier's proposal, saying it was important that Serbs and Kosovars came back to the negotiating table.

"If they are not able to talk together about their future, then others will take the decisions," Asselborn said.

Steinmeier said he had discussed his troika proposal with Ban, Russian Foreign Minister Sergi Lavrov and US Secretary of State Condoleezza Rice.

"Now that we all have to presume there will not be a Security Council resolution, I feel it is important that we don't leave the ongoing process to its own devices," Steinmeier said.

The German foreign minister stated that stability in the western Balkans was a key EU priority, adding, "The international community needs therefore to maintain its joint responsibility towards the region."

EU's credibility at stake over Kosovo

Other EU foreign ministers at the Brussels meeting emphasized that the EU's credibility was on the line over the resolution of Kosovo’s status.

"The stability of the Balkans, the unity of the European Union, the credibility of us versus the United States and Russia is at stake," Swedish Foreign Minister Carl Bildt, a Balkans expert within the EU, told reporters. 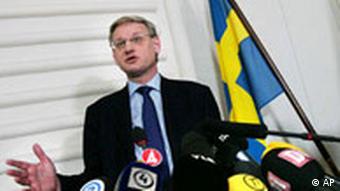 Bildt added that unity between the EU states over Kosovo was "absolutely paramount" if the issue of Kosovo was to move from the UN Security Council to the international Contact Group.

British Foreign Secretary David Miliband echoed Bildt's statement on EU unity. "It's probably important that we establish our own position and are clear about the need for strong European leadership and strong European unity in this area," he said.

The Europeans and their US allies on Friday postponed attempts to secure a Security Council resolution that would have granted Kosovo "supervised independence," in the face of a likely Russian veto.

Russia, a strong ally of Serbia, had complained that recognizing an independent Kosovo would send the wrong signal to other breakaway regions. 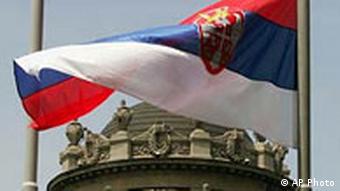 Serbia is being backed in its stance by its ally Russia

Serbia has said such a move would be a breach of its national sovereignty but concedes it could give special autonomy to Kosovo.

After talks with Rice on Monday, Kosovo President Fatmir Sejdiu said the province would work with the United States and Europe to coordinate its future and not unilaterally declare independence.

"For us it is critical that the process is coordinated and moves ahead in close cooperation with the international community, the US and the European Union in the first place," he told the AFP news agency. "Of course, a formal announcement of independence will happen in due course, but in cooperation and in close partnership with the countries which are supportive of the Kosovo independence."

Kosovo has been under UN administration since 1999, when a NATO campaign drove out Serb forces after accusing them of committing atrocities against ethnic Albanians.

In April this year, Ahtisaari proposed independence under the supervision of the EU after 13 months of Serb-Albanian talks ended in deadlock.

Blocked by a Russian veto threat, supporters of a UN plan to grant independence to the Serb province of Kosovo ended their bid in the Security Council on Friday. (20.07.2007)

After talks with Chancellor Merkel, Serbian Prime Minister Kostunica Tuesday repeated his objection to an UN-backed plan for Kosovo and called for direct talks between Belgrade and the breakaway Serbian province. (17.07.2007)

A US anti-missile defense system, pipeline politics, Polish meat, press freedom and Iran policy have all been issues in the disputes between the West and Russia ahead of the G8 summit. Statehood for Kosovo is the latest. (05.06.2007)