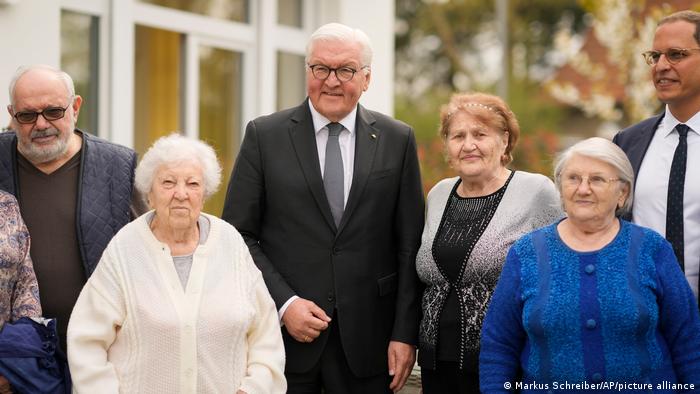 President Steinmeier meets with Holocaust survivors who have fled Ukraine

"World War II started when I was 9 years old," Susana Neyman said. "And now at 90 years old, I have to experience another war," she added as German President Frank-Walter Steinmeier leaned toward her.

Neyman is from the Ukrainian city of Dnipropetrovsk, or Dnipro. Now in emergency accommodation on the eastern outskirts of Berlin, she described to the German head of state how, during World War II, her mother fled with her to the North Caucasus region and then, as the Nazi army advanced, to Kazakhstan: "We tried to survive somehow."

The hail of bombs

Another survivor is Svetlana Sabudkina, a little younger than Neyman, who was born in Kyiv. She recalled how she "got caught in the hail of bombs" as a child with her Jewish mother in the city of Kharkiv and then survived in the Ural Mountains, where "a kind-hearted Russian woman took us in."

Sabundkina also remembers postwar Kyiv, when German soldiers, prisoners of war, helped to rebuild the destroyed city. She shared her school lunch with one of them: "I felt sorry for him."

Germany's Steinmeier told the group of six Holocaust survivors, who escaped Ukraine to Germany despite their advanced ages, "It breaks my heart to meet people who have had to flee a war twice in their lives and now don't know if they will ever be able to return home." 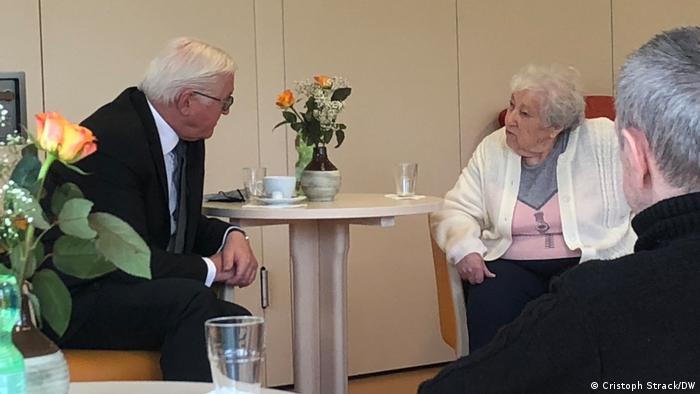 Steinmeier said he was deeply affected by their stories. He spoke of the "truly vicious cynicism" of Russian President Vladimir Putin, who had cited the baseless claim of  "denazification" as a justification for the invasion of Ukraine. The stories of these survivors, Steinmeier said, are proof of Putin's hypocrisy.

Most of them come from eastern Ukraine, specifically Dnipro, a city that has been hit by Russian missiles almost every day for weeks. Steinmeier asked whether they were all transported by bus, to which Neyman responded that it took three days in an ambulance to get to the Ukrainian-Polish border. All six of them traveled to Poland, she said, and then on to Germany.

At the end of the visit, Steinmeier spoke of his mother, who was among the many ethnic Germans expelled from Poland at the end of World War II. "We were always very aware of what it means to lose your house and home and have to start over completely again," he said.

Steinmeier's visit was well-received by the group of elderly survivors, one of whom asked for a selfie as he left. The others thanked him when he told them: "You are welcome here, you can rely on our help."

This reception came in stark contrast to the criticism directed at the president in recent weeks, which saw Kyiv refuse his offer of an official visit after he was accused of being too sympathetic to Russia during his two terms as foreign minister. Instead of traveling to Ukraine, he has been meeting displaced Ukrainians in Germany as well as Ukraine's Eastern European neighbors.

So far, nearly 80 Holocaust survivors have fled to Germany from Ukraine and are being housed across the country.

The "El Jana" home in eastern Berlin is still fairly new. The full-time care facility was completed shortly before the outbreak of the COVID-19 pandemic and has not yet been fully occupied. Although the building is subjected to the roar of the nearby airport, street traffic, and trains, the building is an oasis of peace for its new inhabitants.

That the dozens of survivors have made it to Germany is thanks to the commitment and help from the Jewish Claims Conference (JCC), an organization that has been providing financial and medical assistance to Holocaust survivors for years.

As soon as they realized that the Russian invasion could jeopardize that assistance, the JCC set to work organizing evacuations. At first, only a handful wanted to leave their homes, but that number gradually increased, according to Rüdiger Mahlo, the JCC's representative in Germany.

For those who did not want to come to Germany, evacuations were also organized for Israel or other European destinations.

According to Mahlo, more evacuees are arriving in Germany every day, a process that required around 50 people from 15 different organizations, including the Central Welfare Office of Jews in Germany (ZWST). Those assisting on a daily basis include full-time employees of welfare associations, but also many volunteers.

Aid workers have also been quick to thank the support of locals, who have donated the clothes, medical equipment, and other necessities that the new arrivals need.

For the El Jana facility, this also means a demanding commitment from employees who speak Russian, according to director Laura Rose. "For them, it means twelve-hour shifts now. There must always be someone there, even at night and on weekends, who speaks Russian," she said.

Although the survivors thanked Steinmeier for the hospitality they have received in Germany, they made it clear that their wish for the future is to return to Ukraine.

"Thank you for the very warm welcome. But still, we all want to go home as soon as possible," they told the president.

Boris Romanchenko, 96, had been active in keeping alive the memory of Nazi atrocities. German lawmakers said his death "shows the criminal character" of Russia's invasion of Ukraine.