Germany′s next government aims to tackle housing crisis | Germany | News and in-depth reporting from Berlin and beyond | DW | 26.11.2021 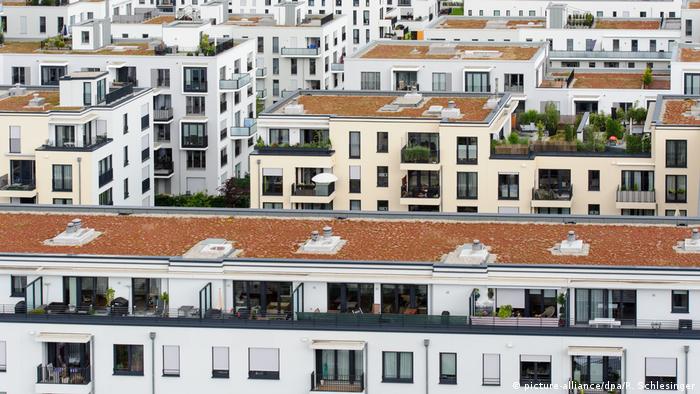 The housing situation in Germany is in such a state of disarray that the country's next government wants to create an entirely new ministry to oversee it. Until now the domain of the Interior Ministry, housing and building will be spun off into their own federal portfolio.

A Social Democrat is likely to lead it, keeping with the center-left party's bread-and-butter campaign issue. A key pledge — 400,000 new housing units every year, 100,000 of which are to be publicly subsidized — survived weeks of negotiations with the Greens and the neoliberal Free Democrats (FDP) to make it into the final coalition agreement. Together, the three parties are set to form Germany's next government.

That pledge is 50,000 more units than the current goal, and about 100,000 more than the construction sector has managed to build to date. It's also a fourfold increase in those receiving subsidies. Depending on the study, Germany may need at least that much new housing every year, subject to migration trends, for the next decade or longer.

For all its promises, however, the coalition agreement is short on specifics on how they might be fulfilled. Many of the housing and building policies will need the Bundestag, the German parliament, either to amend old or pass new laws — and persuade debt hawks to part with the billions needed to implement them.

"It will only be possible to assess the actual effects of the change once the instruments have been put into concrete terms," Andrej Holm, a housing researcher at Berlin's Humboldt University, told DW.

Apartment hunting in Berlin: A lottery

Huge demand and limited supply have helped push up rents across Germany, a country of renters, and especially in its cities. In a 2018 snapshot, Holm said that 4.4 million households in major urban areas were living in spaces either too small or too expensive. Berlin has seen its rents about double on average in a decade, according to Numbeo, a cost-of-living calculator.

Incomes have not kept up, meaning residents have to spend more of their earnings on housing, leaving less for other types of consumption. That has knock-on effects elsewhere in the economy. Lower earners are disproportionately affected, according to a study Holm co-authored for the Hans Böckler Foundation, as the supply of low-income housing has been drying up.

The SPD's answer has long been "build, build, build." Their coalition agreement foresees an "alliance for affordable housing," with a special focus on students and younger people, as well as supporting homeownership, nonprofit housing associations and local planning policy. It outlines efforts to streamline and digitalize the bureaucratic processes that approve and finance construction projects. The goal is to clear administrative backlogs that add to costs, which in turn put pressure on rents.

"The new coalition is taking up many of the proposals and demands made by tenants' organizations in recent years in the area of new housing construction," Holm said.

Can I still afford to buy a house?

Not all costs will be easy to control. Supply chain bottlenecks and inflation are hitting the construction sector as they are other aspects of the economy. The costs of labor, land and especially material are up dramatically from a year ago, according to recent data from the Association of the German Construction Industry. Shortages also mean building delays.

Building is a long-term solution, which does little to alleviate affordability and supply now. Germany has had a so-called rent brake on the books since 2015, but it largely exempts new construction. The coalition agreement calls for reviewing the brake, but largely foresees no major changes to it except its extension to 2029. Critics of the brake say it has too many exceptions and should be tied to incomes rather than the market.

"Especially in cities with tight housing markets, this will not be sufficient for effective tenant protection," Holm said.

Berlin tried to cap rents for five years, but Germany's constitutional court threw out the law earlier this year on the grounds that the city-state could not override federal regulation. In response, a grassroots movement succeeded in passing a nonbinding referendum that calls for expropriating the largest property firms.

No such expropriation is on the table at the federal level. Aside from constitutional issues regarding the protection of private property, opponents say it arbitrarily picks winners and losers and would cost billions of euros in compensation.

"The money we would need to pay out to these companies can be much better used for investing in the additional housing that's needed," Alexander Handschuh, the spokesperson for the German Association of Towns and Municipalities (DStGB), told DW.

International studies have shown that some forms of rent control, while protecting existing renters, can make rents for newcomers more expensive. The overall impact on a city can be net-zero.

Germany has 1.8 million empty apartments, according to the DStGB, outside cities where people are less interested in living — or would have difficulty doing so.

"They can't commute easily, there is bad telecommunications infrastructure, or there's a lack of services like retail and medical facilities," said Handschuh.

Housing itself is not enough; public transport connections, schools and business space all have to get built, too, which Handschuh said would attract people to move out to these less occupied areas. While the DStGB welcomes the establishment of a building ministry, it would like to see an even wider-reaching infrastructure ministry that takes all these planning and development aspects into account.

Meanwhile, green space needs to be protected, which is an obstacle to the rush to build. Parks and open areas are not only an attractive feature for many residents, but also help keep a city cool.

The coalition agreement acknowledges this conundrum. There are some specifics, such as a requirement to heat new buildings using at least 65% renewable energy by 2025. It also wants to renegotiate how energy costs, which will rise as the cost of CO2 goes up, are split between tenants and owners.

But the financial side is the easier part, as the government can, at least in theory, throw infinite money at cushioning climate costs. Space and resources are more limited. All in, the construction sector accounts for 38% of global energy-related CO2 emissions, according to the United Nations Environment Program.

Germany's incoming government is pinning some of its hopes on more innovation in building materials, which could reduce their emissions output. There has already been a push to build with more wood, which can be regrown, rather than concrete. However, many technologies remain either unproven or far from scalable, as Germany finds itself lacking tens of thousands of housing units every year.

"None of this can be realized overnight," said Handschuh. "I'm afraid there aren't any quick solutions."