Less than half a year after Germany did away with compulsory military conscription, the Bundeswehr's transition to a volunteer army is proving rockier than expected. 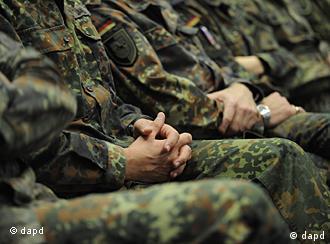 Most of the soldiers dropped out for another job offer

Germany's first wave of volunteer military recruits has already suffered a major slump. Over a quarter of the Bundeswehr soldiers who joined the service on July 1 have quit, according to German Defense Minister Thomas de Maiziere.

Most of those leaving the Bundeswehr had exercised their right to quit within the first six months without providing a reason. De Maiziere said, however, that the most common motivation was "another job offer."

He added that many recruits who had recently graduated from high school ended their service to accept late-arriving university admissions. Others cited "personal reasons."

"Very few said that the tone in their troop scared them off, or that they felt over- or underchallenged," de Maiziere told the Berlin daily.

According to de Maiziere, the number of volunteer soldiers to quit was proportional to the percentage of job-quitters in the private sector, which he put at between 20 and 25 percent.

A fifth of the soldiers leaving were sent home by the military because they did not fulfill the physical requirements for service.

De Maiziere said that, despite the setbacks, the army was still "quite on target" with its recruitment and would welcome in January 2,650 new male and 170 new female members to its ranks.

Germany's Defense Ministry ended the draft this summer as part of wide-sweeping military reforms led by de Maiziere. The plans foresee a military of 5,000 to 15,000 volunteer soldiers, as well as 170,000 professional soldiers and short-service volunteers. Previously, the Bundeswehr comprised some 250,000 service members, including 50,000 conscripts.

Germany's defense minister has made an unannounced visit to Bundeswehr troops in Afghanistan. Thomas de Maiziere said he was "cautiously optimistic" about the security situation and the planned 2014 withdrawal. (21.12.2011)

The German Defense Ministry has presented plans to drastically reduce the size of its military bases, and in several cases close them altogether. Some are calling for financial aid to ease the transition. (26.10.2011)