The German chancellor has stressed the need to "move forward together" and said she will relay her concerns to Trump. She also called for uniform security standards in German states following the Berlin terror attack. 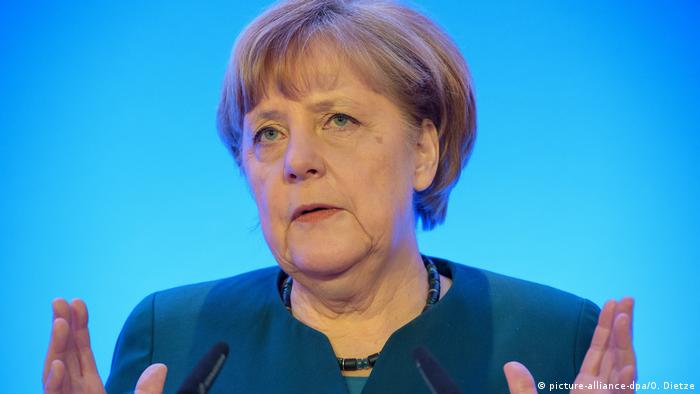 German Chancellor Angela Merkel on Saturday urged the United States to stick to multilateral cooperation, and warned that US President-elect Donald Trump's protectionist attitudes could threaten the global economy.

"My profound conviction is that there are more advantages ... to moving forward together than when everyone resolves their problems for themselves. I am truly convinced of this," she told a press conference at the end of a two-day meeting of her Christian Democratic Union (CDU) party in the town of Perl in the western German state of Saarland.

When asked whether or not Trump's "protectionist tendencies" could pose a threat, Merkel recalled the international response to the 2008 global financial crisis, which "came from the United States," she noted.

"The response to overcome that financial crisis was not a response based on closing oneself off, but a response which called for cooperation, for common rules, for regulation of financial markets," Merkel said.

"I think this way worked, and naturally we are going to seek dialogue with the new American president," who will be inaugurated on Friday, January 20.

As the United States is Germany's most important trading partner, Trump's protectionist rhetoric has unnerved business in Europe's largest economy. Merkel also underscored the importance of the G20 industrial powers group, which will meet in Hamburg, Germany, this July.

Security in all states

To reach that goal, however, Merkel emphasized that Germany's 16 states must have the same security standards, arguing that it is not sensible for states to have different rules regarding video surveillance and random police checks.

The CDU party leader also went after German states which are governed by rival parties, the Social Democrats (SPD), the Left party and the Greens.

Life is better for the people living in states governed by the CDU or its Bavarian sister-party, the Christian Social Union (CSU), Merkel said, because they feel they can "live more securely."

'Most difficult election yet'

The leaders of Merkel's CDU met on Friday and Saturday in Saarland to kick off the election year. Three states will hold elections, beginning with Saarland in March, before Germany's general election in September.

Merkel, who is seeking a fourth term, has said she expects this election to be the most difficult yet. However, the CDU leader was confident that despite differences with the CSU over an annual refugee cap, the joint conservative campaign will be successful.

Merkel said leaders of her party agreed "that we can live with such a disagreement."