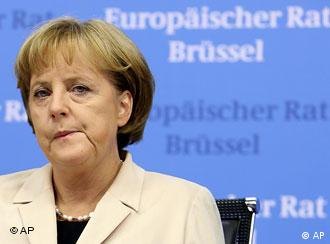 Merkel believes the treaty can be saved

A day after Polish President Lech Kaczynski said he doesn't see the point in ratifying the Lisbon Treaty after Ireland's rejection of it last month, Merkel called for other European leaders to push forward regardless.

"The Treaty of Lisbon makes the EU more democratic and strengthens the powers of all member states," Merkel said in the Wednesday, July 2 edition of Germany's mass-circulation Bild newspaper.

"For that reason I will do everything to push forward the ratification process together with the French presidency," the German chancellor said as France took over the six-month rotating EU presidency.

Kaczynski told the daily Dziennik he would not endorse the treaty until Ireland had changed its stance and had made its decision without pressure from other EU members. All of the 27 countries in the bloc must approve of the treaty and the Irish rejection last month brought the ratification process to a standstill.

Merkel noted that EU leaders had agreed at their summit in Brussels on June 20 that the Irish government would report back in October on how to proceed following the Irish no vote.

"We are all agreed that Europe must become more effective to act jointly in a world that is growing together. And in my view the treaty forms a good basis," Merkel said.

And in Germany, President Horst Koehler announced Monday he would delay signing the relevant legislation, which has been passed by both houses of parliament, until the constitutional court had ruled on two separate applications.

If finally ratified, the new treaty would end the system of rotating presidencies by appointing a president of the bloc for two years. The EU's foreign policy head would also receive additional powers to allow the bloc to speak with one voice on key international issues. And a new "double majority" voting system would come into force, streamlining the EU's cumbersome decision-making process.