Germany's Maas in Jordan over future of anti-IS mission

Germany's foreign minister has traveled to Jordan for talks on deescalating tensions in the Middle East. As Iraq pushes for troops to leave, Heiko Maas wants clarity about the future of German missions in the region. 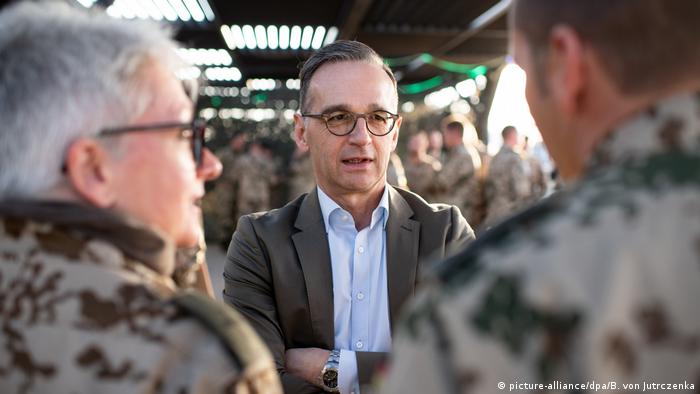 German Foreign Minister Heiko Maas called on Iran to stop interfering in regional conflicts during his visit to Jordan on Monday.

"We are agreed. If Iran wants to deescalate, then it must stop agitation in its region, which also applies to Iraq," he said after meeting with his Jordanian counterpart, Ayman Safadi.

With the situation still tense in Iraq and Iran and the future of Bundeswehr troops in the region unclear, Maas was in Jordan on Monday for talks.

The trip comes after days of heightened tensions between Iran and the United States, which were prompted by the killing of top Iranian general Qassem Soleimani in an airstrike in Baghdad.

Tehran retaliated by saying it would no longer abide by the limits of the 2015 Iran nuclear deal, as well as by firing missiles at US targets in Iraq — and accidentally shooting down a passenger plane in the process.

What is he doing in Jordan?

'We want to prevent IS from re-strengthening'

Although Iran and the United States have since backed off from an all-out military conflict, Maas warned that the tensions of the past few days won't simply disappear.

"The immediate danger of war appears to have been averted, but the tensions that continue to exist there will remain with us," Maas told reporters prior to his departure in Berlin.

He added that Germany and its partners "want to prevent IS from regaining ground in Iraq at all costs" and that Jordan is an important partner in the fight against the militant group.

What does Germany hope to achieve?

Maas' main concern during his trip to Jordan will be getting answers about the future of the anti-IS mission in Iraq.

More than 280 Bundeswehr soldiers are currently stationed at the Al-Azraq airbase in Jordan, which serves as the coordination base for Germany's operations in the Middle East.

In response to the US airstrike that killed Soleimani in Baghdad, Iraq's parliament passed a resolution calling for the withdrawal of foreign troops.

Germany already pulled back some troops from the region, but it remains unclear whether all troops will be pulled. On Monday, Maas said troops are to remain in Iraq for the time being.

Germany has been carrying out a non-combat support mission against IS in Iraq to train troops and also contributes to the US-led anti-IS coalition by providing air-based reconnaissance and supporting missions through air-to-air refueling.

Fearing war on their doorstep, EU foreign ministers have agreed to find ways to defuse tensions between the US and Iran. They also focused on conflicts in the wider region and again sought to salvage Iran's nuclear deal. (10.01.2020)