Young, dynamic former big-city dwellers are leading a turnaround of one of Germany’s beloved natural reserve areas. From gin tastings and coffee roasters to vast hiking trails, the area is brimming with possibilities. 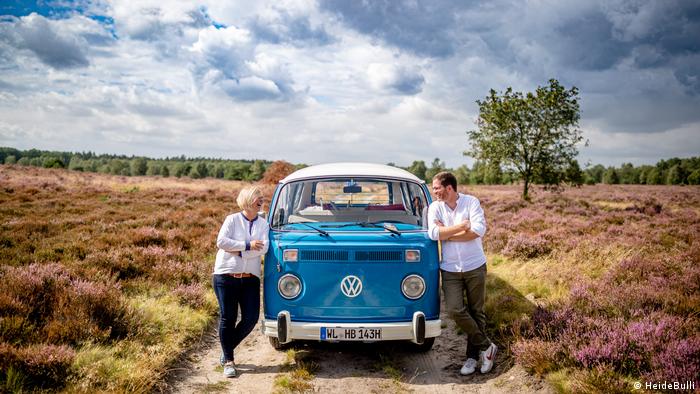 It is sunrise, and fog lies over the Lüneburg Heath region in northern Germany. The leaves of the trees and bushes have changed color. After the famed purple heather bloom in summer, fall creates a new color spectacle in this nature reserve south of Hamburg.

Antje Soetebier is on her way to the shed, which houses Karl, Oskar, Hilde and Frieda — her four VW buses. She pushes open the heavy stable door and greets the vehicles with a small bow. "We always do that," explains Soetebier, a committed entrepreneur in her mid-thirties. With a background in hotel management, she has very recently dared to take the plunge into self-employment.

Together with her husband, Arne, she recently started a business offering sightseeing tours of the Lüneburg Heath in her vintage buses — amidst the coronavirus pandemic. Many people asked them if they were sure about their decision, and they were. "We drive hotel guests to the excursion destinations and show them how the flocks of sheep here find their way back to their barns. We offer lots of nice surprises, like picnics in the Heath and coffee or gin tastings." 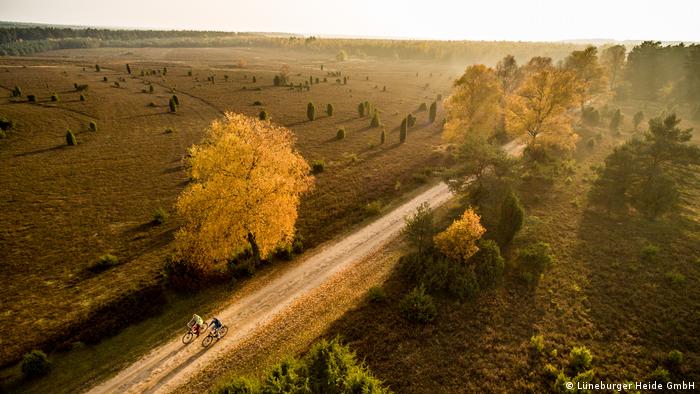 Arne Soetebier drives honeymooners and their guests to the most beautiful spots so they can take memorable photos. Frieda — a 1974 model that, like the other three classic cars in the small fleet, was named after a grandparent of its owners, thus also serves as a rolling photo studio. "That is particularly popular with the Instagram generation," says Antje Soetebier.

The Lüneburg Heath has always been a popular destination for stressed city dwellers from northern German cities, but now, amidst a global travel slowdown, it has become a place to go for domestic visitors from all across the country, who have discovered its soft heathery sands as a hiking paradise. Covering some 23,000 hectares (56,800 acres), the Lüneburg Heath is one of the largest and oldest nature reserves in Germany, having been made a protected area by 1922.

Yet the Lüneburg Heath is also known as a coffee-and-cake paradise for the elderly — in short, it has a rather dusty image for many. "We are now doing a lot of cleaning up" of that preconception, says Antje Soetebier. Over the last decade, many young people, especially from Hamburg, have moved to the nearby villages that dot the picturesque landscape. They are all fed up with the hustle and bustle of the big city and bring a breath of fresh air to the farmsteads, where carriage rides and ambling walks are more the order of the day. Another benefit of life in the countryside: People support each other. Knowing one’s neighbors and sticking together through thick and thin is a typical way of life for people living around the Lüneburg Heath, say local residents. 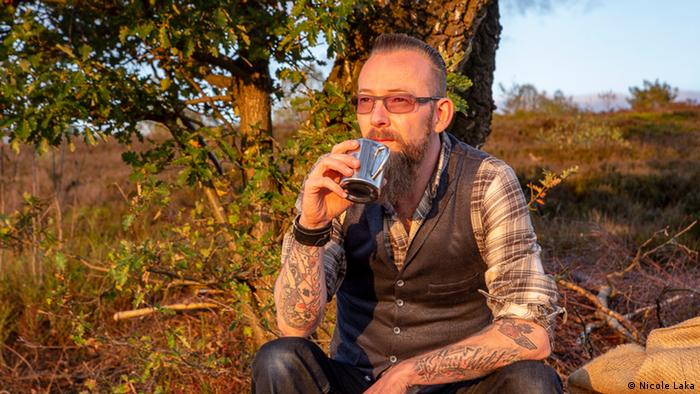 On this Indian summer day, Antje Soetebier's first stop is at the old watermill in a village called Dierkshausen. It is run by Frank Prohl — known as Franky — the local coffee roaster. With his lumberjack shirt, Chuck Taylors and a full beard, he would fit the profile of a big-city hipster. Indeed, the tattooed industrial mechatronics technician had a secure job for many years in Hamburg, 60 kilometers (37 miles) away. "Until I started a family five years ago and no longer wanted the noise of the big city," he says. Prohl continued his education, learned how to roast coffee and opened his own roastery-cafe in the historic watermill in Dierkshausen in 2018, using charming local references to name the various coffee blends.

Everyone here knows this charismatic father of two children. Together with his wife, Rieke, he now runs the roastery, cafe and a mobile food truck. It can be reserved for family celebrations, company outings and markets. Prohl’s passion for the Heath comes through as he extols the virtues of life here: "Where else can I sit in my garden at night, look up and see the Milky Way?" 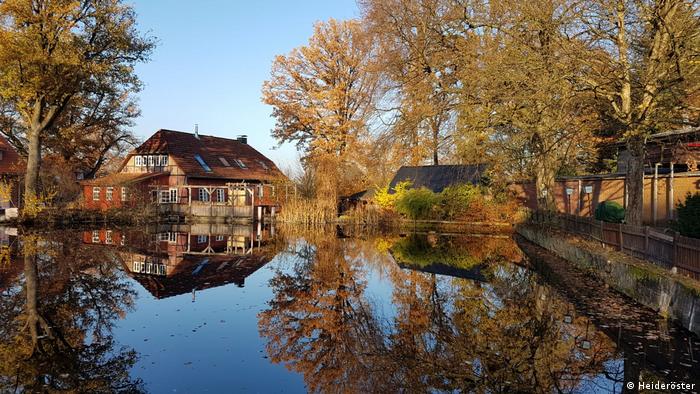 Back on one of the vintage buses, Antje Soetebier is transporting visitors. She is not allowed to drive into the car-free nature reserve. But on her buses, tourists can quickly get from the hotel to the hiking trail or other popular excursion destinations, such as the Wilseder Berg, a hill that rises some 169 meters (554 feet) above the Heath.

Ariane and Vincent have travelled here from near Koblenz in western Germany. "Actually, we wanted to be in the Philippines now," says the 29-year-old Ariane with a sigh. "But it's also really beautiful here. You really have a lot of space, and sometimes you don't meet a single person on a hike." She searched the internet for pictures of hotels in the Heath. "We didn't find many," she says, but the Stimbekhof Hotel in Oberhaverbeck had a lot of pictures on its website and she liked that. She booked a four-day mini-break there with her husband for four days. The newlyweds wanted to enjoy the nature and fresh air here. 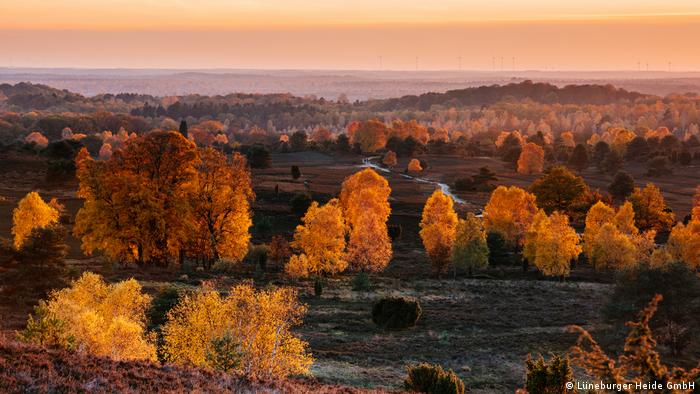 Pandemic a reversal of fortunes for domestic tourism

Antje Soetebier regularly drives guests from the hotel through the forests and to the meadows and hiking trails of the Lüneburg Heath. The small town near Bispingen is a good starting point. Here, four young ex-Hamburg residents took charge of the dusty old Stimbekhof property, a ensemble of buildings with thatched roofs, giving it a new lease on life amidst the pandemic. And the bet has paid off so far: The four 30-something proprietors can hardly keep up with the number of inquiries they receive.

In the hotel’s fireplace room, there is already lively activity at 6 p.m. Proprietor Björn Bohlen chats over a snack of pancakes with a local sheep cheese. "The Heath is fantastic for relaxing," he says with conviction. He has just designed an autumn Heath-inspired menu with his chef. His colleague Sabrina offers yoga classes. 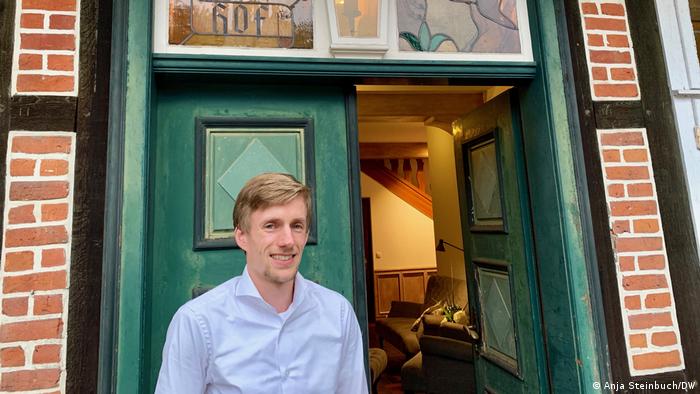 For Bohlen, even if many hygiene regulations have to be implemented these days, having nearly all 32 rooms occupied is a fantastic outcome and worth all the work they put in. "Everyone does a bit of everything. Otherwise it couldn't work here," explains the athletic 32-year-old. He, too, gave up a lucrative position in a luxury hotel in Hamburg for this small-town adventure.

Nearby, in the guest car park, Antje sets off, driving Karl the VW bus into the sunset, past dense forests and idyllic meadows, with views of wide plains that shine brightly in the golden light of late afternoon. The Heath has something up its sleeve at any time of the day.

COVID Travel Diaries - Traveling in times of the pandemic

We, Olivera Zivkovic and Emily Gordine from DW, traveled for two weeks across Germany in a camper van to find out how the coronavirus pandemic has affected traveling and tourism in Germany. This is what we experienced.