Germany′s Green party: Internal strife and drop in opinion polls | Germany| News and in-depth reporting from Berlin and beyond | DW | 10.06.2021

The Green party has plummeted in opinion polls. At a party conference, delegates will officially nominate Annalena Baerbock as their candidate for chancellor — despite her recent blunders. Heated debates are expected. 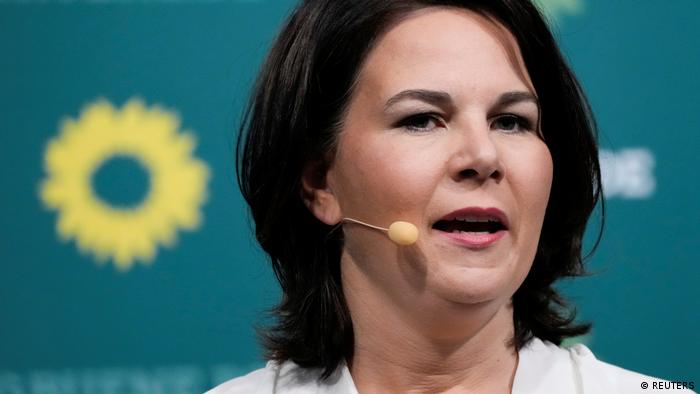 The tide is turning against the German Green party. Only 7 1/2 weeks ago, the future looked rosy for
the Greens. Annalena Baerbock — their young and dynamic party co-leader — had just been
announced as their first candidate for chancellor. The party rose in national polls to almost 30% and at times even overtook the CDU and its leader Armin Laschet. The chancellorship seemed within reach for the first time in the Greens' history.

But a lot has happened since, and the party’s campaign is faltering. The latest "Deutschlandtrend" monthly survey by pollster Infratest dimap puts the Green party at 20% voter support, well behind the CDU's 28%. Support for Annalena Baerbock has plummeted by 12%, putting her behind her competitors, with Laschet — who had been trailing for weeks — taking the lead. 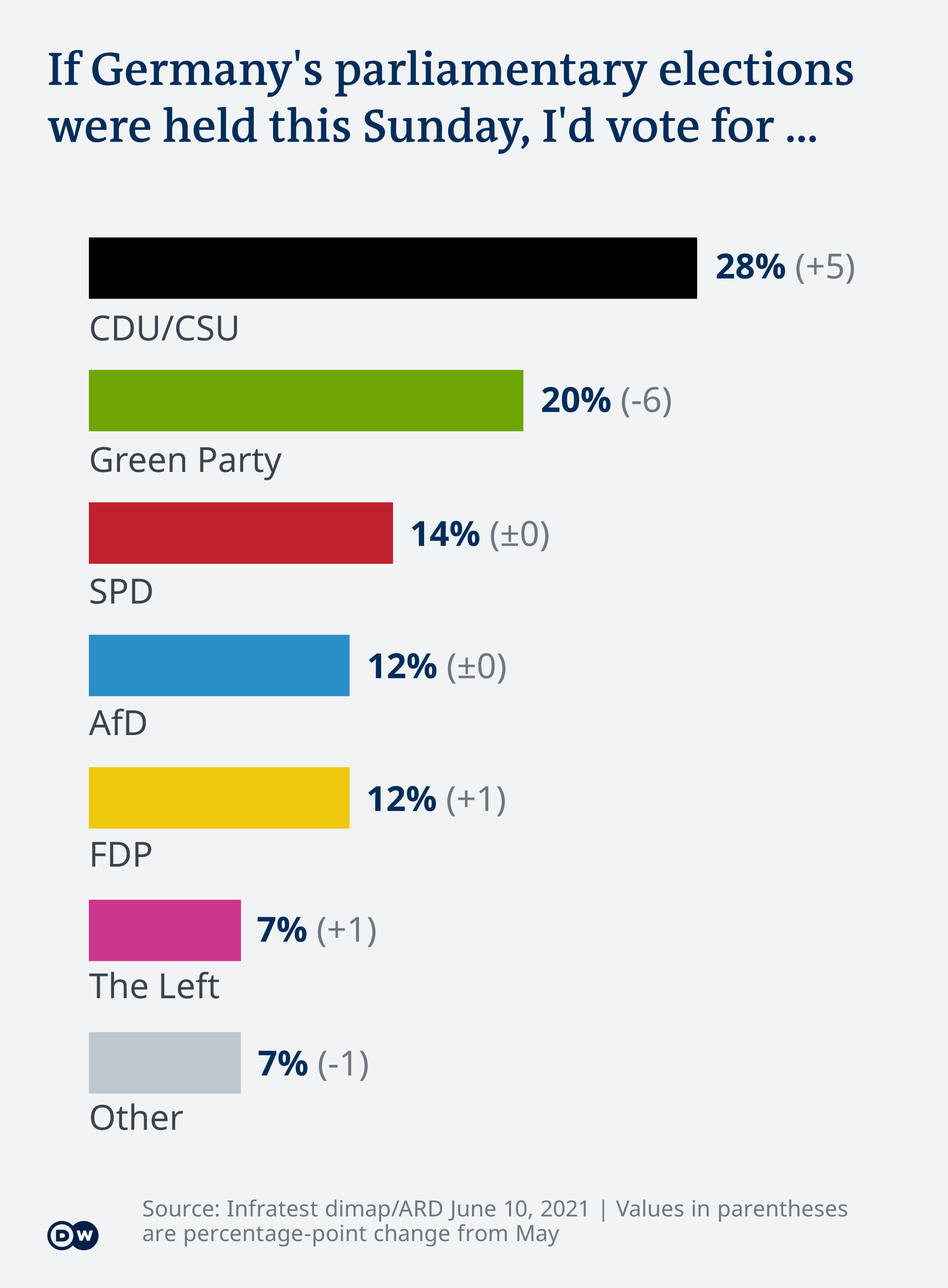 This weekend the Greens will meet for a digital party conference to agree on their election program. They will also officially nominate Baerbock as the candidate for the chancellorship by a resolution of the party conference.

In theregional election in the eastern state of Saxony-Anhalt, the Greens received just 5.9 % of the vote — much less than expected. After the election, the party had to recognize that some of their brash demands don’t go down well in certain regions, especially not in the east.

Baerbock nonetheless wants to stay positive, saying on Sunday that "one thing is clear for us: the starting point for the national election is completely different. After the pandemic, the focus must be on revitalizing this country together. That is why we are running as Alliance 90/The Greens."

Battle over the election program

Since the Green party was founded 40 years ago, its conferences have been famous for their heated debates. Since Habeck and Baerbock took the lead in 2018, observers have been surprised to witness carefully choreographed events. The Greens have turned mainstream, wrote the commentators.

The days of harmony may be over now. Climate protection will once again be at the center of the party conference. But grassroots activists risked derailing proceedings by initially submitted over 3,300 amendments to the election program. Now only 20 of them are left.

The slogan "Germany — It's all there" runs across the program. But the amendments start with this title. One amendment calls for deleting the word “Germany,” which gave the Greens some bad press ahead of the conference. The Greens want their chancellor candidate to run the country but won’t even acknowledge it by name?

At the party conference, the Green party leadership must be careful that ever-rebellious grassroots
activists don't write unachievable goals into the election program.

The Greens are already calling for a 70% reduction in greenhouse gases from their 1990 level by 2030. A large group of grassroots representatives wants that changed to 85%.

Even the 65% promised by the current government will only be achieved with maximum effort. The draft of the election program also calls for a speed limit of 130 kilometers per hour (80 miles per hour) for the autobahn. The grassroots activists want that cut to 100 kilometers per hour. 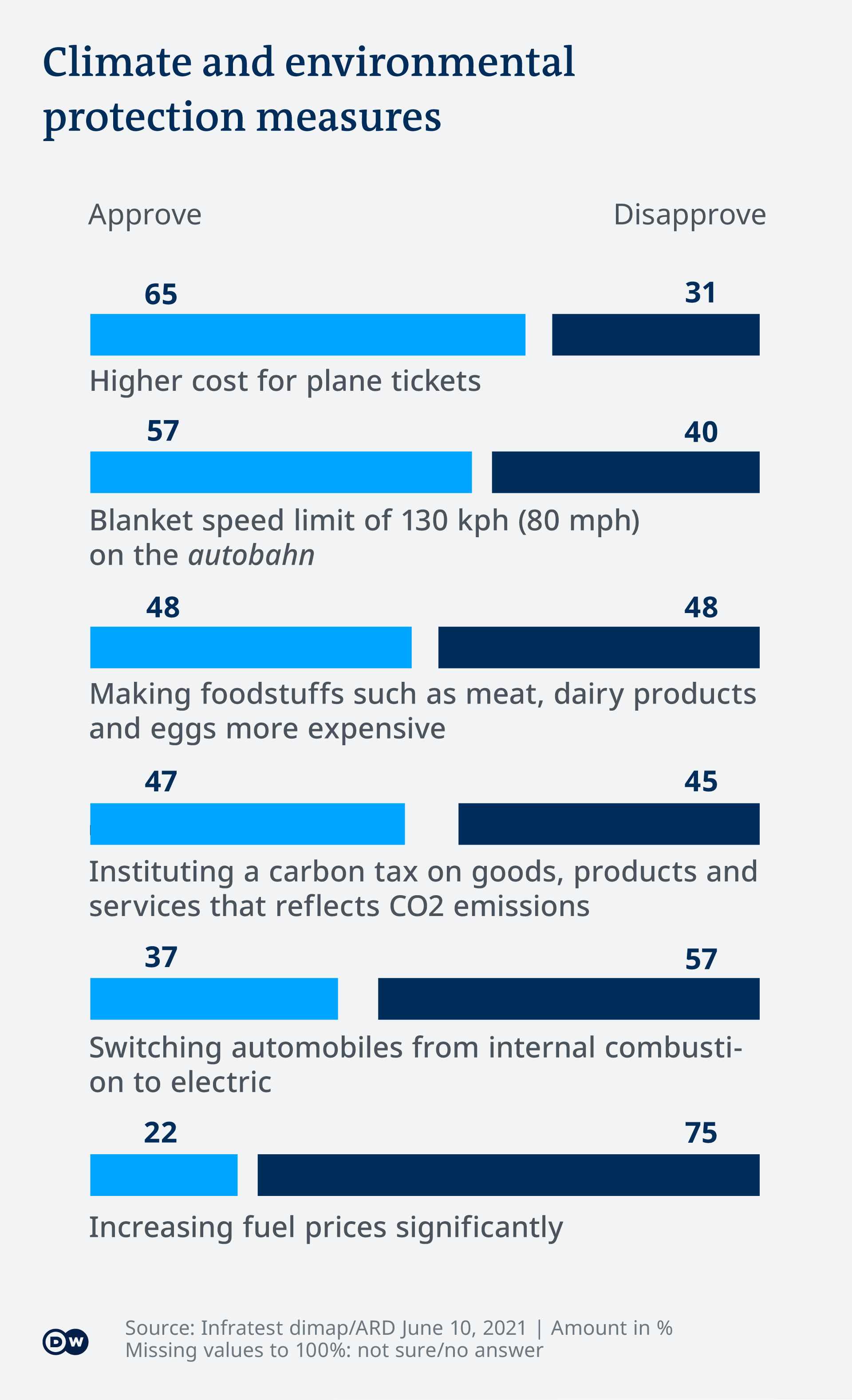 Baerbock knows that these demands will not be received well everywhere, but she thinks it is good that the party continues to place its focus on climate protection. The government has promised a lot and delivered little in the battle against greenhouse gases.

"That's why we're taking another very close look at what we need to do in the 100-day immediate program and in the instruments for the next few years. Unfortunately, the federal government is no longer planning to initiate this in this legislative period, especially concerning the expansion of renewable energies," Baerbock said ahead of the party conference.

Baerbock: We must make changes to create a fair country

One topic certain to be debated at the conference is the trip to Ukraine of the co-head of the party, Robert Habeck. In Ukraine Habeck expressed support for sending weapons to Ukraine — to be usedin self-defense. He said this despite the fact that the Green party election program states: "We strongly support civilian crisis prevention and want to use restrictive export controls to end European
arms exports to war and crisis zones as well as to autocrats." Later, Habeck claimed he meantdemining equipment. The other parties criticized Habeck for his naivete in foreign policy.

Baerbock herself has also been under fire after she was forced to admit she had not initially paid tax on more than €20,000 ($24,000) she received as a Christmas bonus from the party. She has now done so.

Journalists also found inaccurate information in her CV, including claims that she was a member of organizations such as the respected German Marshall Fund.
There are still over a hundred days before the election. The Greens’ top candidate will need all of the the support she can get at the party conference.

This article has been translated from German and re-edited for clarity after publication.