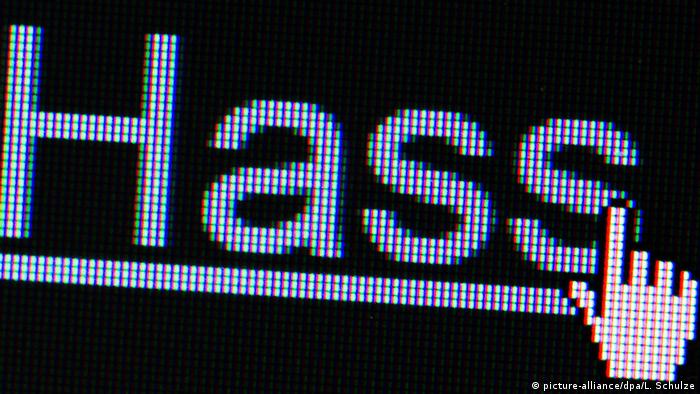 Hass, the German for 'hate,' on the internet

The German government on Wednesday approved a bill that aims to crack down on hate speech on social media websites such as Facebook and Twitter.

If the bill is signed into law, social media networks would have to report online hate crimes to Germany's Federal Criminal Police (BKA). Such hate speech posts include far-right propaganda, graphic portrayals of violence, murder or rape threats, posts indicating that someone is preparing a terrorist attack or distributions of child sex abuse images. The networks are already required to delete such posts from their platforms.

The bill also expands the definition of criminal hate speech to include threats of rape or property damage, as well as expressions of approval for serious crimes. Additionally, crimes motivated by anti-Semitism would result in higher sentences.

The measures await the approval of the Bundestag, Germany's lower house, and the Bundesrat, the upper house of parliament.

'Dry up the breeding ground'

"We must dry up the breeding ground where this extremism flourishes," Lambrecht said. She added that hate speech often affects Jews, Muslims, refugees and women, and can lead to repulsive threats of rape.

"Racism and misogyny are often close to each other when it comes to instigators," she said.

In 2018, politically motivated crime increased by nearly 20%, according to figures from Germany's Interior Ministry. Most such hate crimes, particularly ones with anti-Semitic and xenophobic motivations, were committed by right-wing extremists.

In October 2019, a gunman tried to enter a synagogue in the eastern German city of Halle during the Jewish Yom Kippur holiday. He killed two people nearby and injured two others near a Kebab shop. He streamed the entire attack on Twitch, an Amazon streaming service for video gamers, during which he made misogynist and xenophobic statements.

The recent attack on a synagogue in Halle made headlines around the world and fueled concern of growing anti-Semitism and the threat of right-wing extremism in Germany. Who were the victims of this heinous act? (18.10.2019)