Germany's friendly against Netherlands a 'symbol of freedom'

Germany are set to face the Netherlands in what is one of the hottest rivalries in international football. Following the terror attacks in Paris, though, the heat is bound to be turned way down on this one. 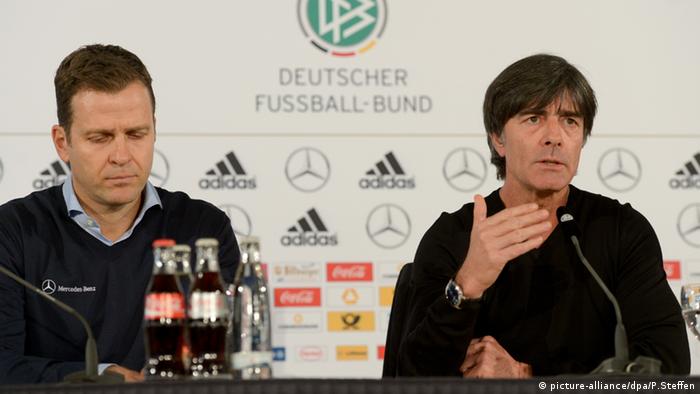 Both national team head coach Joachim Löw and manager Oliver Bierhoff used their pre-match press conference near Hanover on Monday to stress the importance of going ahead with Tuesday's friendly against the Dutch, in spite of Friday's terrorist attacks in Paris that killed at least 129 people and wounded hundreds more.

"It's a clear message and symbol of freedom and a demonstration of compassion, as well as sorrow, for our French friends - not only in France, but throughout the world," Löw told reporters.

At his last press conference, ahead of last Friday's exhibition game, Löw had spoken of how he had wanted to use the team's next few friendlies to make adjustments and prepare his team for next summer's European Championship. On Monday, though Löw spoke almost exclusively about the reasoning for going ahead with Tuesday's match, and how the players were dealing with what they had experienced in Paris. He made clear that neither Friday's match, nor Tuesday's would be of much value to his preparation.

"This game won't be the yardstick it would normally be for me," he said. "We want to play the game and behave very professionally, but I believe that the result will not be an important factor."

The coach noted that in view of the Paris attacks, "the much-touted sporting rivalry between Germany and Holland will fade into the background."

Löw also spoke of the shock and fear the players had experienced when they were forced to spend Friday night in their dressing room. 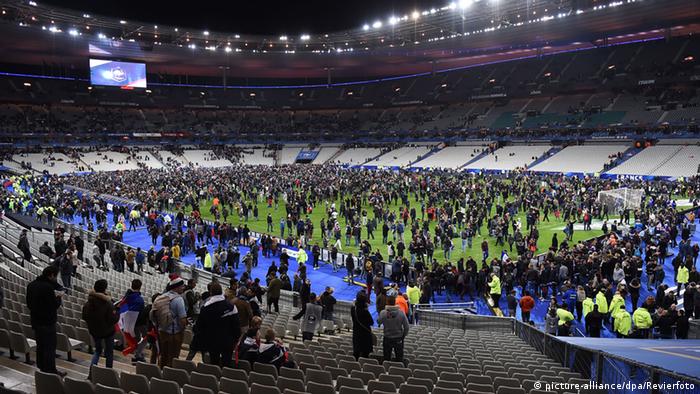 After Friday's game, the fans, who had heard the blasts outside of the Stade de France moved to the 'safety' of the pitch.

"During the terrible, shocking night, which we experienced in the dressing room, came the question: 'can the game on Tuesday take place?' and we talked about it to the players."

Löw said that as they arrived back in Frankfurt on Saturday morning, he didn't have the sense that the game against the Netherlands would go ahead.

"But we talked about it again on Sunday and it was clear that the game had to take place. It's a clear statement about freedom and solidarity," he said. "Clearly, we will be thinking of the victims and their families."

Bierhoff said the DFB (German FA) was considering what would be the appropriate way to show solidarity before Tuesday's contest. Some have suggested that France's national anthem could be sung. Bierhoff said this had not yet been decided.

"We have had a few ideas, but we want to talk to the Dutch about them first," he said.

Bierhoff also confirmed that there would be stepped up security for the game against the Netherlands, which is to be attended by Chancellor Angela Merkel. Löw expressed faith in the German authorities to ensure the security of both the teams and the fans in Hanover. He also said he was sure that the French authorities would take all the necessary measures to keep next summer's tournament safe.

"It makes little sense to discuss another country hosting the event," Löw said. "What happened (in Paris) could have happened anywhere."

In one of the few statements he made about the actual football, Löw confirmed that six of the players whom he had named on the roster for this international break would not be with the team in Hanover. Jerome Boateng and Kevin Hector have both picked up injuries, while Löw decided to give Bastian Schweinsteiger, Lukas Podolski and Manuel Neuer a well-earned rest. Leroy Sané, meanwhile is to play in the under-21 European qualifier against Austria.

While Germany and France played out an international friendly, Paris was rocked by terrorist attacks outside. The attacks forced the World Champions to spend the night in the stadium, before returning home this morning. (14.11.2015)

The hotel housing the German national team had to be evacuated due to a bomb threat. This came hours before Germany was to take on France in a friendly match. A search of the hotel was conducted but no bomb was found. (13.11.2015)