German Finance Minister, Wolfgang Schäuble had been awarded one of Europe's highest honors for his work towards stabilizing the euro. The jury for the 2012 Charlemagne Prize said he had helped foster European unity. 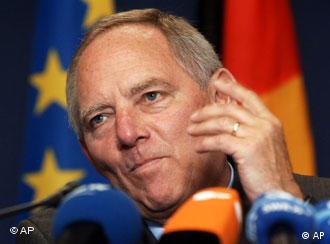 Schäuble is the 54th winner of the prestigious prize

The committee for a German award honoring individuals who contribute to European unity declared German Finance Minister, Wolfgang Schäuble the recipient of this year's prize on Saturday.

The jury for the 2012 Charlemagne Prize said the 69-year-old conservative had been a major player in ongoing efforts to resolve the eurozone debt crisis.

The prize honors Schäuble's "major contributions to the stabilization of the monetary union and the deepening of the integration process," said a statement released Saturday.

It also recognized his "great efforts in overcoming the division of Germany and of Europe" and his role as a "significant player in virtually all the advances of integration in recent decades," the statement said.

Schäuble has been a central figure in German politics for almost three decades. Confined to a wheelchair since an assassination attempt in 1990 that left him paralyzed from the waist down, Schäuble is considered one of the architects of German reunification.

Prior to becoming finance minister in 2009, he served as interior minister under Chancellor Angela Merkel's first government. He also served under former Chancellor Helmut Kohl.

The prize, to be presented on May 17, includes a cash reward of 5,000 euros ($6,700). Previous winners include the former head of the European Central Bank, Jean-Claude Trichet in 2011, German Chancellor Angela Merkel in 2008 and US President Bill Clinton in 2000.

A day before the Eurogroup meeting, German Finance Minister Wolfgang Schäuble warns that Germany can't bear the load for all of Europe. Ministers hope to agree on how to increase the firepower of their bailout fund. (29.11.2011)

Berlin continues to push for 'fiscal union' in Europe

As Germany approved the country's 2012 budget, the parliamentary debate and its coverage focused much more on eurobonds and Germany's obligations to the rest of the EU. (25.11.2011)

For his role in stabilizing the euro Jean-Claude Trichet, president of the European Central Bank, has been awarded Germany's prestigious Charlemagne Prize for services to European unity. (02.06.2011)