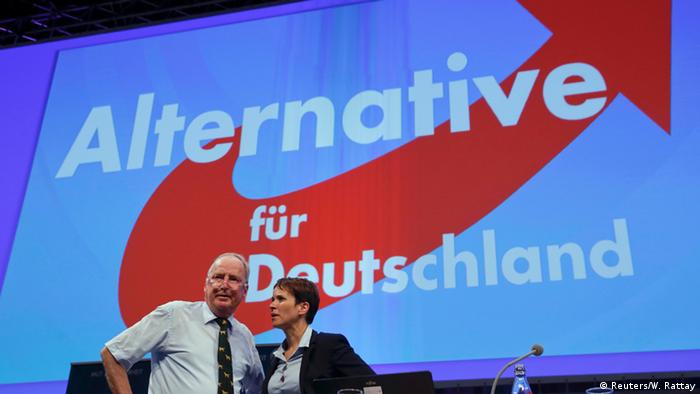 Pastor Petry told German Deutschlandfunk radio that he joined Merkel's Christian Democratic Union (CDU) party last year to make clear that he did not share the political views of his separated wife, who co-leads the populist right-wing Alternative for Germany (AfD).

His move follows a public distancing from another AfD stalwart, deputy leader, Alexander Gauland, by his daughter, Dorothea Gauland, who is also a Protestant pastor. 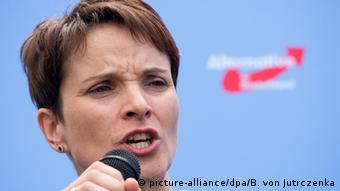 Frauke Petry, alongside co-leader Jörg Meuthen, is the prominent face of an AfD that is currently polling well above 5 percent thresholds in surveys ahead of three regional state elections on March 13.

Created in 2013 on a euroskeptic ticket, the AfD switched last year after a leadership battle to focusing on opposing Merkel's liberal, multi-pronged approach to Europe's refugee crisis.

In a long interview with Deutschlandradio's inter-religious program "Tag für Tag" [Day by Day] on Wednesday, Sven Petry said he regarded Merkel's course "by and large as sensible and correct. Yes."

Pastor Petry, who serves a congregation at Tautenhain near Leipzig in Germany's restive eastern state of Saxony, said he joined the CDU recently to avoid being further identified in society with the views of the AfD and his wife.

"That's not what I do, and I have never done that," Sven Petry said.

Two weeks ago, AfD co-leader Petry, who says her party is "critical" of policies within Merkel's grand coalition government, admitted that some AfD members had been among a mob that harassed refugees bused to Clausnitz, a town in Saxony state.

Since 2014, Petry has also led a 14-member opposition AfD parliamentary bloc in Saxony's assembly in Dresden, the scene since 2014 of rallies by Pegida, an "anti-Islamisation" movement that began in Saxony although statistically its foreign resident count is low.

When bystanders cheered as an intended refugee hostel burned in Bautzen, two nights after the Clausnitz incident last month, Sven Petry tweeted that "whoever claps in applause, when it burns, needs urgently an [intercultural] integration course."

He told Deutschlandradio on Wednesday that he subsequently received two angry emails but otherwise social media "likes" and endorsement for his welcoming Christian stance.

He said communal debate on asylum policy in Saxony was "polarized," adding that encouraging communal dialog was important, while also asking those who attended anti-foreigner protests if they "really know what they are doing?"

"At the moment it is relatively difficult to position oneself in a differentiated way," Sven Petry said. "One is either pro-refugee or against refugees."

Alexander Gauland, who is one of three deputy AfD leaders, and also heads the opposition AfD in Brandenburg state's Potsdam assembly near Berlin, was widely rebuked last month for his remarks to "Zeit Magazin," a supplement of Germany's mainstream weekly newspaper "Die Zeit." 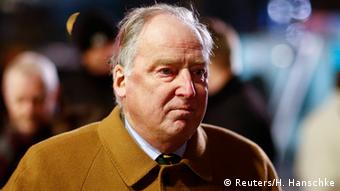 Germany must close its borders and "then withstand the brutal pictures," Gauland had said, and went on: "We can not allow ourselves to be blackmailed by children's eyes."

"I regard what he says as horrible," Pastor Dorothea Gauland, Gauland's 33-year-old daugher, based in Russelsheim near Frankfurt, told "Zeit Magazin" in response.

"He's learned that that attracts [political] attention," she added.

Campaigning at Wittich in the Mosel-Rhine region on Wednesday, Merkel called or more development aid abroad to assist refugees, saying Germany must "take on more responsibility in an open world" outside EU borders.

Nationwide, recent surveys show AfD battling for third place alongside the opposition Greens and ahead of the Left party, with Merkel's conservatives on about 35 percent and the center-left Social Democrats (SPD) led by Vice Chancellor Sigmar Gabriel on about 24 percent. Discontented voters have typically abandoning Merkel's conservatives for the AfD.

Last month a survey for Saxony-Anhalt by the pollster INSA showed the AfD higher on 17 percent, ahead of the regional SPD.

Germany's next federal parliamentary election is due in late 2017.