A stunning first half strike from Kenza Dali condemned Germany to a second recent defeat to a major European rival. While the match was only a friendly, it offers coach Martina Voss-Tecklenburg food for thought. 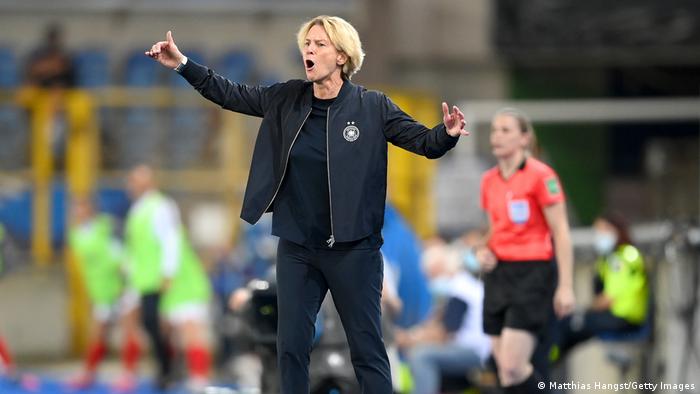 Martina Voss-Tecklenburg is preparing Germany for a delayed Euros

Another year to prepare for the Euros may be gratefully received by Germany after all, after they fell to defeat at the hands of one of their major European rivals for the second time in four games.

Recent wins against Australia and Norway will not have erased the memory of defeat to the Netherlands earlier this year and another loss, albeit to a sensational strike, leaves Germany coach Martina Voss-Tecklenburg much to ponder.

"Nobody disappointed," she said of her players after the game. "Everyone tried to contribute fully. Still, we have to get better, and we'll continue to work on that. These are all learning processes."

Voss-Tecklenburg shuffled her pack a little without appearing to weaken her side too significantly, relying on a core of players from title winners Bayern Munich.

After a cagey opening, an incisive pass from Linda Dallman gave Svenja Huth a golden opportunity to break the deadlock on 20 minutes but the experienced striker failed to get any power on her strike as she tumbled under minimal pressure.

The home side were finally stung in to action and took the lead 10 minutes later through Kenza Dali. The West Ham United midfielder appeared to pose little threat 25 yards out and running horizontally and away from the German goal. But she dug out a powerful drive that dipped over Merle Frohms. 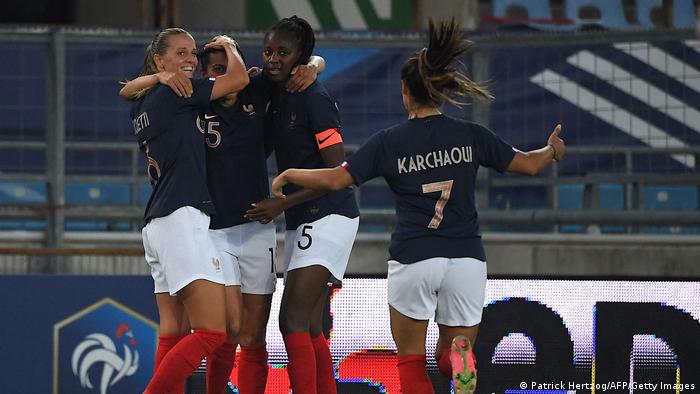 The goalscorer seemed to pull something around the midriff in the act of scoring and was replaced soon after. Pain almost followed for Germany too when Dallmann dwelt on the ball in her own half, allowing Grace Geyoro a free run on goal, only for Frohms to win the one-on-one battle.

Geyoro gave Germany another scare early in the second half before France's Bayern star, Viviane Asseyi, and her German clubmate Klara Bühl exchanged scorching solo runs that fizzled out at the finish.

Despite the class of the French side, Voss-Tecklenburg continued to chance her arm, giving another half an hour to Hoffenheim 18-year-old Jule Brand, who made such an impact against Australia in her debut in April. The teenager almost made a similarly striking introduction on Thursday, but couldn't keep a header down with her first touch.

In truth, the visitors failed to create any genuine opportunities in the second half and failed to score in a match for the first time since 2018.  But, unlike her male counterpart Joachim Löw, who faces the same opposition in the men's Euros on Tuesday, Voss Tecklenburg has time on her side.

"Overall, we saw a lot of sequences from which we can take quite a lot," she said. "We can gain a lot from this for the next tasks."

Experienced German international Melanie Leupolz swapped Bayern Munich for English side Chelsea in the summer. But the midfielder feels that more needs to be done to change the view of the women’s game in Germany.