Germany has won the right to host the 2024 European Championship, beating Turkey in a vote by UEFA's Executive Committee. This is to be the first time Germany will host the tournament since 1988. 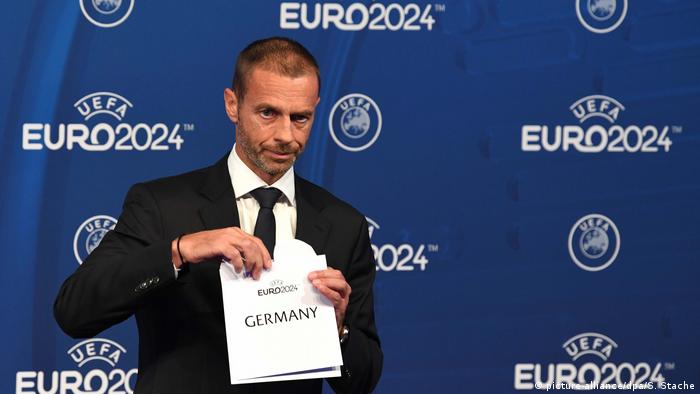 Thursday's announcement was delayed by several minutes, but when UEFA President Aleksander Ceferin finally stepped onto the stage at UEFA headquarters in Nyon, Switzerland, it came as little surprise that it was Germany's name that he pulled out of the envelope.

"The procedure was transparent, the vote was democratic. Every democratic decision is the right decision," Ceferin said.

The announcement was met with broad smiles and cheers from German Football Assocation (DFB) President Reinhard Grindel and the rest of his delegation.

"I would like to thank the UEFA Executive Committee for the unbelievable trust," Grindel said. "I feel a sense of responsibility. We know what this tournament means. We will do everything in our power to live up to the expectations."

Grindel was also quoted as saying Germany had won by a vote of 12-4 with one invalid ballot cast.

While the DFB's bid had long been seen as the favorite to win the right to host Euro 2024, it was given a major boost last Friday with the release of UEFA's evaluation report on the two competing bids.

The 40-page report said there were no major reservations about Germany's bid to host its first European Championship since 1988.

"The DFB (German Football Association) bid is of high quality and comfortably meets overall expectations when it comes to political aspects, social responsibility, sustainability and human rights," it stated.

But the report outlined concerns about the bid submitted by Turkey, the only other country on Thursday's ballot, particularly in the areas of human rights, infrastructure and the economy.

At the same time, though, the report noted the full support of Turkish President Recep Tayyip Erdogan and the general public for the project.

Now that Germany has won the right to host Euro 2024, Philipp Lahm, the ambassador for the DFB's bid, is to take on the role of head of the organizing committee for the tournament.

"We have amazing stadiums, fans who love football, first and foremost we have people who love celebrating with other Europeans," said Lahm, a former Germany captain. 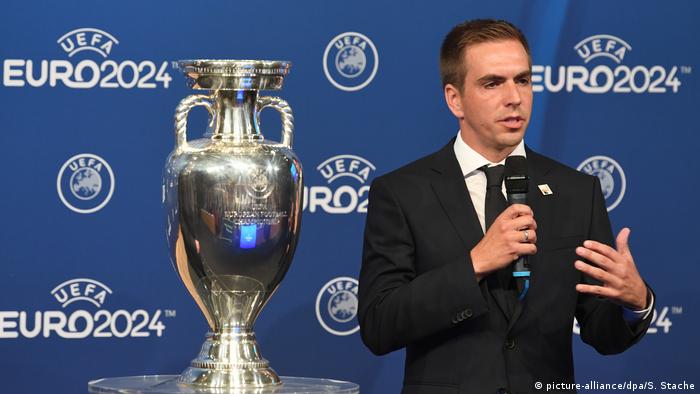 "We will organize a huge football party in Germany."

This was the fourth time that Turkey has been unsuccessful in a bid to host a European Championship, having sought to win the right to host the 2008, 2012 and 2016 tournaments.

"This is saddening for UEFA and for Euro 2024. Our strength, quality in terms of (this) organization is obvious. It is clear that we have new facilities and stadiums," Turkey's sports minister, Mehmet Kasapoglu, told Turkish television. "There is nothing we have lost as a country."

Good news for DFB after a difficult summer

As for Grindel and the DFB, winning the right to host the tournament comes as a welcome piece of good news following a summer that saw the national team crash out of the World Cup in Russia – as well as the controversy over a meeting between Germany players Mesut Özil and Ilkay Gündogan and the Turkish President.

Grindel in particular was also criticized for the way he handled the aftermath of the photo op, which took place just weeks before the start of the World Cup. The affair culminated in Özil resigning from international football in a series of tweets, in one of which he said he would never play for Germany as long as he had "this feeling of racism and disrespect."

Euro 2024 is to mark the return of the European Championship to a single-host format, after the pan-European tournament in 2020, which is intended as a celebration of its 60th anniversary. The German city of Munich is to be among the venues to host Euro 2020 matches.

After four unsuccessful bids, it was surely Turkey's turn - but the European Championships have been awarded to Germany. The correct decision, says DW's Joscha Weber, but DFB President Grindel's days are still numbered. (27.09.2018)