Germany vs Estonia: Neuer, Gündogan and Reus set to return as Löw turns to experience

Germany are in the Estonian capital of Tallinn preparing for their next European Championship qualifier. Having fielded a young, experimental team against Argentina, some familiar — and older — faces are set to return. 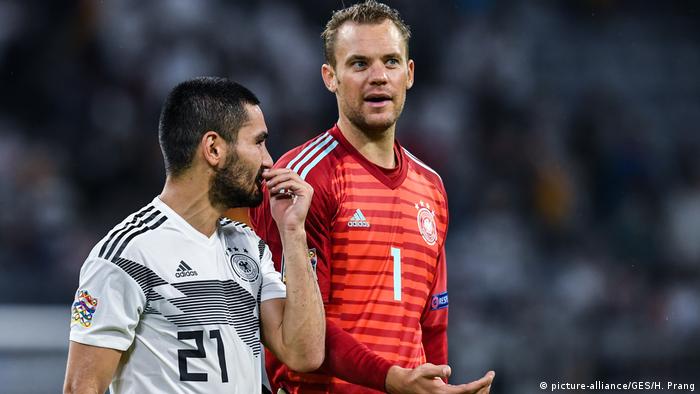 Anything short of victory in Estonia on Sunday evening (20:45 CEST kick off) would be considered an abject failure for Germany, who have an identical qualifying record as the Dutch, but sit second due to the Netherlands‘ superior record between the two sides.

With Northern Ireland hot on Germany‘s heels, coach Joachim Löw knows Germany can't afford any slip-ups and appears set to recall Manuel Neuer, his captain, as well as Ilkay Gündogan and Marco Reus and Timo Werner. The players likely to make way are Luca Waldschmidt, Julian Brandt and goalkeeper Marc-andre ter Stegen, who made his first Germany start in over a year against Argentina on Wednesday. Kai Havertz's place is also at risk.

For Estonia, the prospect of wiping out Germany from the qualification process is a tantilizing one, and Neuer knows what to expect from the Estonians having been involved in a few games like this through the years.

"I expect us to be very concentrated for this game," the Bayern Munich man said. "We need to pass the ball well and good movement from the offensive players against the Estonians, because know they will defend deeply. We are aiming to score as quickly as possible and move early towards victory." Robin Koch, center, appears set to keep his place but Havertz, left, and Waldschmidt, right, could drop to the bench.

Gündogan in, Havertz out?

It's not just Neuer returning to the fold. Gündogan sat out the Argentina game with a muscle injury, but Löw indicated that the Manchester City man is in line to start in Tallinn which, depending on the formation Löw plans to employ, threatens the starting place of Havertz.

The 19-year-old Bayer Leverkusen midfielder scored his first international goal in Dortmund on Wednesday on only his second Germany start, leading to widespread praise for his performance — and Havertz's performance prompted words of support from his captain Neuer.

"It was impressive how he took the ball and used it without slowing the game," said Neuer of Havertz. "He performs well when he plays and will continue to evolve over the next few years, which gives us all positivity for the future."

Neuer is the eldest member of the current Germany squad. That's partly down to injuries ruling out some of his older teammates, but he is the father of this team nonetheless, a new experience for him. "It's a change, I'm the oldest at 33," Neuer said, with a wry smile. "It's exciting to get to know new guys and the new generation. It's also motivating to see how they do, an das an older player I must help them develop and take responsibility. But they are all top guys."

Neuer (33), Gündogan (28) and also Dortmund's Marco Reus (30) belong to the "older" generation of Germany players. Löw has called on these players to show seriousness and professionalism in getting the job done in Tallinn, where only a win will do.