The SPD's Franziska Giffey won 21.4% of the vote, beating the Greens' Bettina Jarasch, who got 18.9%. Besides the national election, Berlin and Mecklenburg-Western Pomerania were also electing state legislatures. 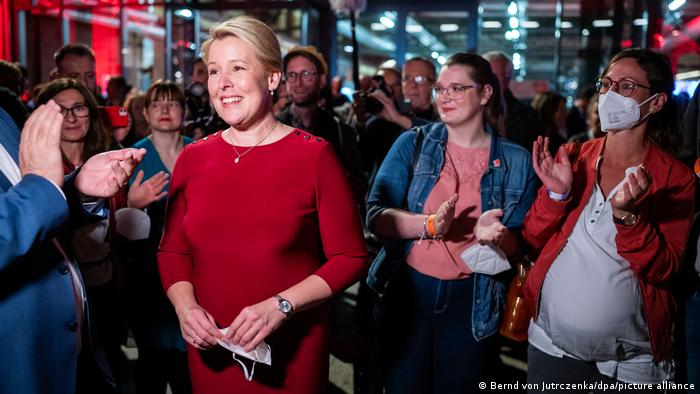 Germany's center-left Social Democrats (SPD) scored a bonus election win in the city-state of Berlin on top of their slim victory in the nationwide election, provisional results showed Monday.

In a closely fought race, Franziska Giffey, the SPD candidate to be the mayor of the German capital, won 21.4% of the vote, beating rival candidates from the Green party, Bettina Jarasch, on 18.9%, and the conservative Christian Democrat (CDU) option, Kai Wegner, on 18.1%. 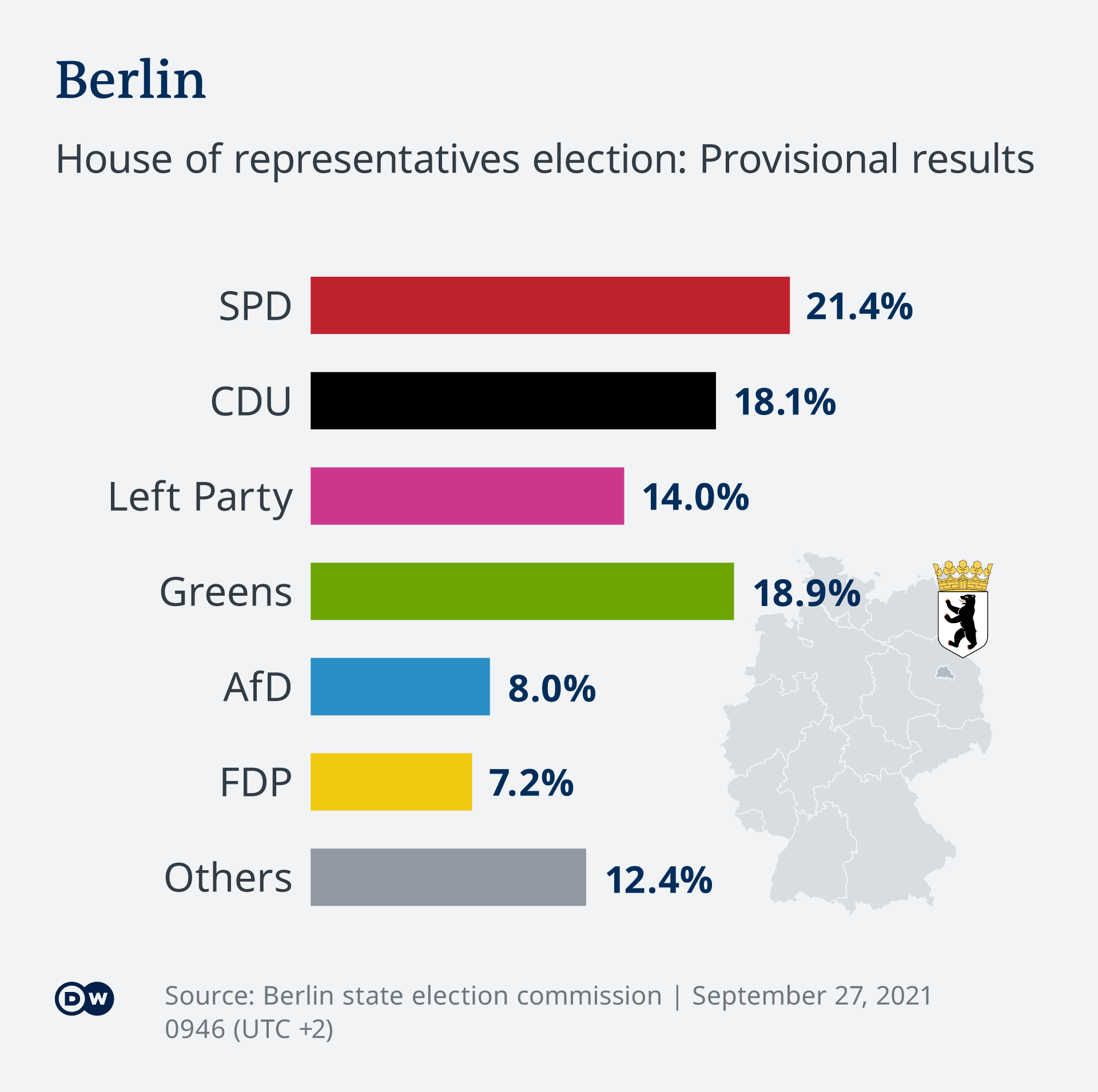 Giffey, who is set to become the female to be elected as mayor of Berlin, told local public broadcaster RBB that she wanted to talk to both the Greens and the CDU about forming a possible coalition, saying her priority was "to get as much of the SPD's program into the coalition negotiations as possible."

The German capital is currently run by a coalition between the SPD, the Greens and the left-wing Die Linke.

Berlin's governing mayor, Michael Mueller of the SPD, had announced that he would not run for the state parliament, leaving the race for who runs the city open.

With either Giffey or Jarasch, Berlin is set to be the third German state to have a female leader, alongside Mecklenburg-Western Pomerania and Rhineland-Palatinate — which both have SPD premiers.

For a period as preliminary results emerged, the Greens' Jarasch appeared to have the slight edge, only for the numbers to turn.

Berlin hasn't elected a female governing mayor since post-war Germany's political system was fully relaunched in the 1949 national elections. However, Louise Schroeder did assume the office from 1947-48 in a caretaker capacity after Otto Ostrowski had to step down. The Soviet authorities at the time then objected to the election of Ernst Reuter as his successor, so Schroeder remained in office.

What about Mecklenburg-Western Pomerania?

Berlin wasn't the only state electing their legislature on Sunday. The seat of the state premier in the northern state of Mecklenburg-Western Pomerania was also up for grabs. Manuela Schwesig (SPD) earned a clear reelection win.

The SPD won 39.6% of the vote, after results from all constituencies were counted, according to the state election administration's website. 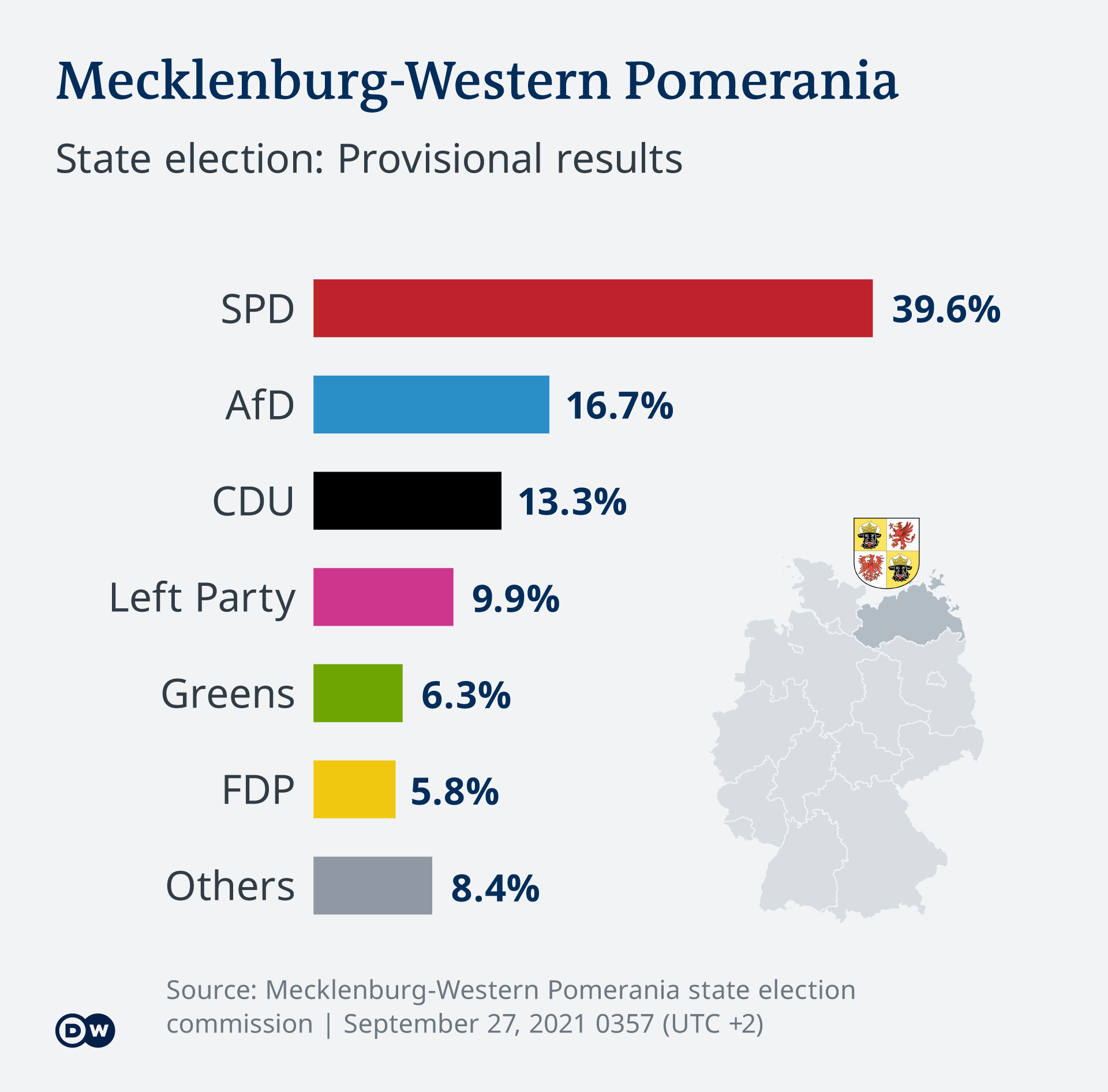 "This evening belongs to the women. The women who, well over a hundred years before us, ensured that we had the right to vote and that we could stand for election. Who are still fighting today to ensure that we are democratically involved," Schwesig said on Twitter.

Schwesig has been the state premier of Mecklenburg-Western Pomerania since 2017, and the first woman to hold the position in the northern state.

She had a brief stint as the interim co-chair of the SPD in 2019 before stepping down  following a breast cancer diagnosis. 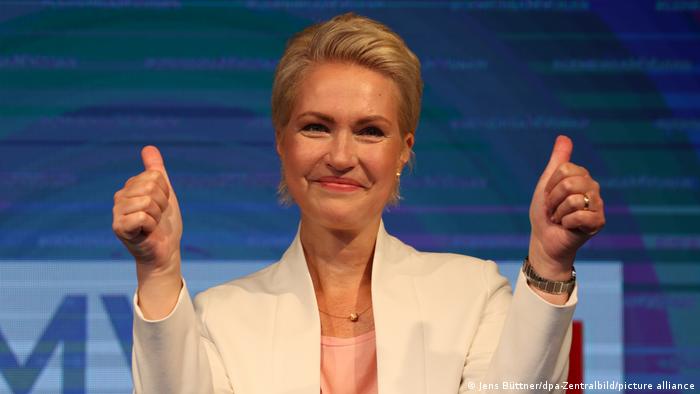 Manuela Schwesig secured a win for the SPD in her state

Since 1998, the state premier of Mecklenburg-Western Pomerania has been held by the SPD.

With a direct mandate, the SPD in the northern state now has several options for forming a government.

Currently, the SPD's current coalition partner is the CDU. But the conservative party got its worst-ever result in the state with 13.3%.

The CDU is also lagging behind the far-right Alternative for Germany (AfD), which got 16.7% of the vote.

Correction: An initial version of this story did not make the distinction that Giffey is the first elected mayor of Berlin. Louise Schroeder was interim mayor in 1947-48.

Berliners cast their referendum votes on whether to nationalize thousands of housing units owned by real estate giants. After counting 27% of the votes, results found that over half voted yes while just 39% voted no.