Tornadoes and extreme weather killed one person and left behind a trail of destruction in western Germany. Dozens were injured in Paderborn, located in the most populous German state of North Rhine-Westphalia. 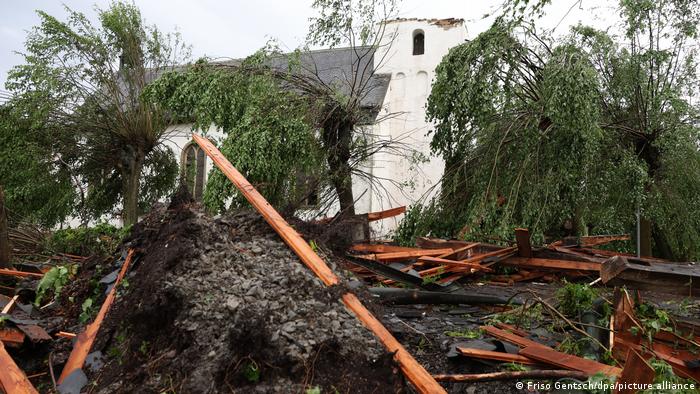 Some of the devastation caused by a tornado that struck the western German town of Hellinghausen, Lippstadt

Tornadoes swept through through parts of western Germany, killing one person and injuring dozens of others, officials said Saturday.

What do we know so far about the weather event?

A 38-year-old man in the western town of Wittgert died after sustaining injuries to the head, police told local media. He suffered an electric shock during the storm which caused him to fall.

In Germany's most populous state of North Rhine-Westphalia, police said up to 43 people had been injured in Paderborn, with 30 individuals taken to the hospital.

"Sheeting and insulation were blown kilometers away. Countless roofs are uncovered or damaged. Many trees still lie on destroyed cars," police said.

In the nearby town of Lippstadt, more than 100 people were temporarily trapped at a local outdoor pool after fallen trees blocked the exit. 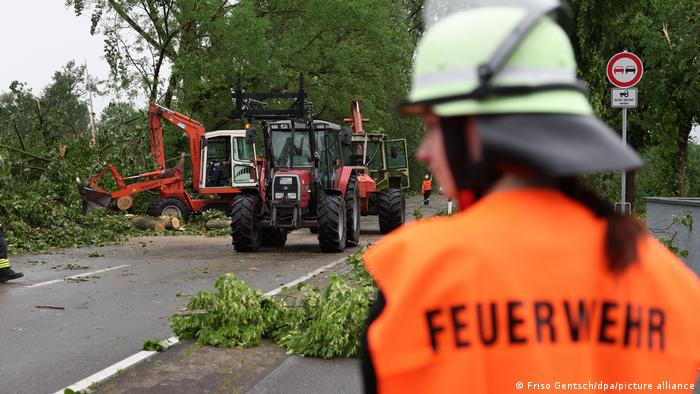 Fire officers clear debris in the town of Lippstadt

The steeple of St. Clemens Catholic Church in Hellinghausen had been ripped from the church roof and was strewn all over the churchyard.

Firefighters from all over North Rhine-Westphalia have been deployed to the towns to help with clean-up operations.

The German meteorological services had put out a storm warning for Friday and predicted gales of up to 130 km/h (80 miles/h) in some places.

Stormy weather over large parts of the country

In Ballenstedt, in the eastern state of Saxony-Anhalt, two French citizens died after a strong gust of wind caught their motorized paraglider shortly after taking off.

"They appear to have been hit by a gust of wind that caused the paraglider to collapse, and the air vehicle crashed onto a field from a height of about 40 meters (131 feet),'' police said.

Authorities in Bavaria said 14 people were injured Friday when the wooden hut they were trying to shelter in collapsed during a storm at  Lake Brombach, south of Nuremberg.

Among the injured were several children and a 37-year-old woman, who was airlifted to a hospital with serious injuries.

Large swathes of Germany were under severe weather alerts on Friday evening. The storms also caused damage in the neighboring Czech Republic.