The first Airbus refitted to serve as an Ebola evacuation plane has been unveiled in the German capital, Berlin. Foreign Minister Frank-Walter Steinmeier said he hopes to see it seldom used. 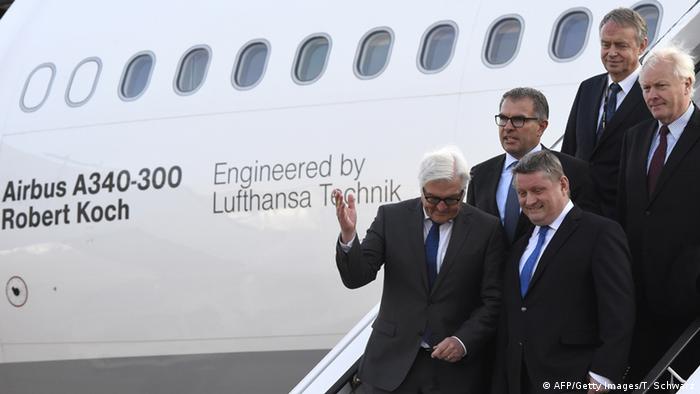 The aircraft is "an important contribution" to the fight against Ebola, Gröhe said. Named after the celebrated German physician and pioneering microbiologist Robert Koch, the plane, according to Lufthansa, is a world first.

Aircrafts previously used to transport Ebola-infected patients were much smaller and unable to always provide the necessary care. Steinmeier stressed, however, that the specially-adapted Airbus A340-300 "Robert Koch" guaranteed medical care under "optimal conditions."

The machine is nearly 64 meters (210 feet) long, and its passenger seats and the rest of the cabin interior were removed and replaced by a "patient transportation isolation unit."

Inside the specially-built airtight tent, an Ebola patient can be cared for to the same extent as in intensive care at hospital, without pathogens escaping and endangering the rest of the crew. The aircraft can also accommodate up to 19 attendants, including technicians for special equipment, officials and doctors.

Lufthansa said that more than 700 pilots and flight attendants have volunteered to work as crew aboard the Ebola Airbus.

"It's probably the one Lufthansa aircraft that we hope to rarely see used," said Steinmeier.

Also on Thursday, Ebola vaccine researchers said that they were "encouraged" by the results of an initial clinical trial, in which volunteers developed antibodies needed to fight the virus. The end product, however, is still some time away.

In the worst-ever outbreak of Ebola, the virus has killed some 5,500 people this year, predominantly in West Africa.

Spanish Health Minister Ana Mato has resigned after her former husband was linked to a corruption scandal that involved the ruling People's Party. A judge had earlier accused her of benefiting from a bribery scandal. (26.11.2014)