The German government says it plans to host an international conference on the refugee crisis triggered by the conflict in Syria. Millions of people have fled to neighboring countries to escape the violence. 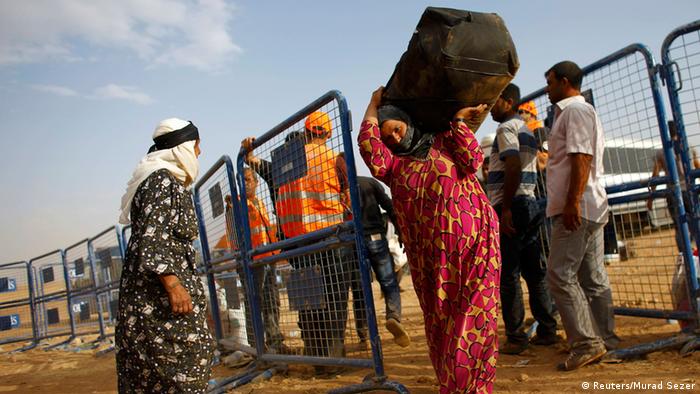 The conference is scheduled to take place on October 28 in Berlin, and is expected to focus on what can be done to help countries affected by the mass exodus of refugees from Syria.

The country's three-year civil war, and more recently the rise of terror group "Islamic State" (IS), has sent over two million people fleeing across the Syrian border to neighboring states. In particular Turkey, Lebanon, Jordan and Iraq have been hardest hit by the flood of refugees.

The German Foreign Office on Saturday confirmed the Berlin conference's scheduling following a meeting between German Foreign Minister Frank-Walter Steinmeier and Lebanese Prime Minister Tammam Salam on the sidelines of the UN General Assembly session in New York on Friday. It said Salam would attend the conference.

Speaking before world leaders at the UN General Assembly on Friday, an emotional Prime Minister Salam said his country is facing a "fierce terrorist onslaught." He said the arrival of more than one million Syrian refugees in his tiny nation since the civil war began in 2011 had created a national disaster.

He also said Lebanon was determined not give in to "pressure and blackmail" by 'IS' militants.

In August, 'IS' fighters kidnapped more than a dozen Lebanese soldiers when they infiltrated the Lebanese Bekaa Valley and overran the town of Arsal near the Syrian border. Two of the hostages have since been beheaded and a third was shot dead, sparking days of violence against Syrian refugees in Lebanon.

More than one million Syrians have also sought refuge in neighboring Turkey.

In recent days, 'IS' militants have targeted the Syrian Kurdish region around Kobani, sending thousands fleeing across the Turkish border.

Some Syrians have also boarded boats in an attempt to find safety further abroad.

Earlier this week, 345 migrants believed to be Syrian refugees were picked up in a fishing trawler that got into difficulty in the Mediterranean near the Cypriot coastline. In August 2012, seven Syrians, including two children, drowned when the boat they were sailing to Cyprus sank off the island's north coast.

Germany has agreed to accept 20,000 refugees from Syria, but according to official figures cited by German news agency DPA, only about 8,000 individuals have entered the country thus far.

The European Union has pledged a total of 2.8 billion euros ($3.5 billion) to support Middle East countries which are grappling with an influx of refugees.

Thousands of Syrian Kurds 'flee to Turkey' from IS advance

Tens of thousands of Syrian Kurds have taken refuge in Turkey as they flee an advance by jihadist militants, the Turkish deputy PM says. The militants are said to have overrun dozens of Kurdish villages on the border. (20.09.2014)