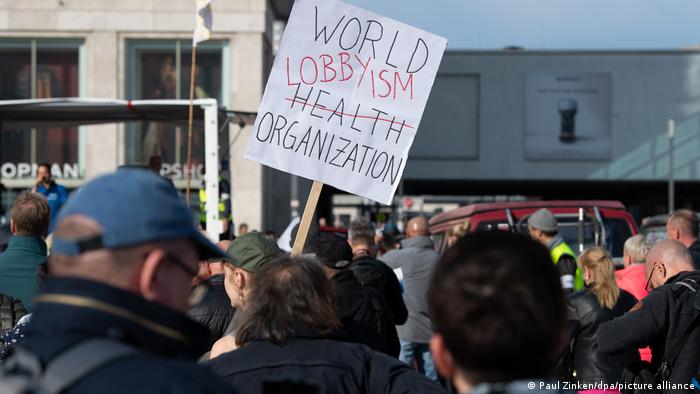 Some 2,000 demonstrators gathered at Berlin's Alexanderplatz on Sunday to protest against the German capital's coronavirus restrictions, according to local authorities.

Berlin police said it deployed 600 officers to disperse the crowd. They said on Twitter that, "for the most part, neither minimum distance nor the obligation to cover one's mouth and nose was observed."

Pink heart balloons and protest signs could be seen among the protesters. Many people shouted: "We are here and we are loud because we are being robbed of our freedom" and "we are the people" among other things.

Elderly people and families with children were among the crowd, according to the DPA news agency.

Protesters were set to march down Karl-Marx-Allee to the Kosmos convention center about 2.7 kilometers (1.6 miles) away.

The venue was originally scheduled to host the World Health Summit on Sunday, but the conference was moved online due to rising infection rates in the German capital.

German Health Minister Jens Spahn and other members of the Robert Koch Institute, Germany's health authority, were scheduled to speak at the conference. 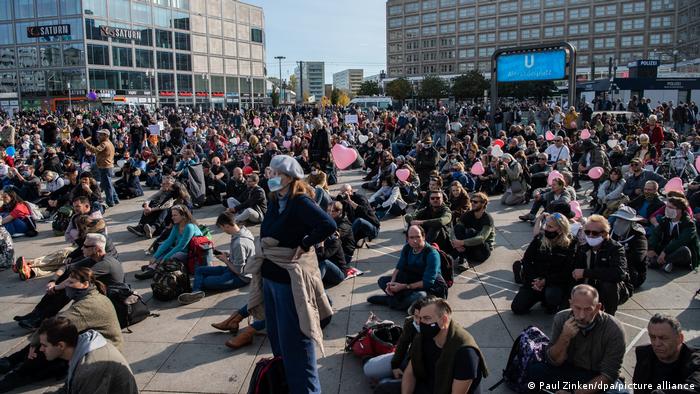 Protesters sit on the ground at Alexanderplatz in central Berlin

But after protesters repeatedly ignored orders to socially distance and put on masks, police began dispersing the crowd.

Some demonstrators broke away from the group and gathered at Kosmos, which was closed off with fences.

Counterprotesters could also be seen outside the convention center. Most of them were wearing black clothing and shouting "Nazis out."

Berlin has seen multiple protests against coronavirus restrictions, with one at the end of August attracting more than 30,000 demonstrators.

Earlier on Sunday, Berlin authorities said bottles and other incendiary devices were thrown at a building for the Robert Koch Institute for infectious diseases.

Another demonstration that was expected to draw 10,000 protesters was scheduled to take place on Sunday evening near the Berlin zoo, but police said it was called off.

More than 25,000 coronavirus cases and nearly 250 virus-related death have been reported in the German capital since the pandemic began.

Berlin currently has the highest rate of infections among Germany's 16 states, with 119.2 cases per 100,000 inhabitants over the past seven days.

Germany as a whole, much like the rest of Europe, is in the midst of a recent surge in cases. The nation has reported more than 10,000 new cases in three of the last five days, including 11,176 on Sunday.