Alaa Houd survived the life-threatening escape from Syria and a long journey through German refugee homes. Now he's trying to begin a new life in Germany - and a job. Daniel Heinrich reports. 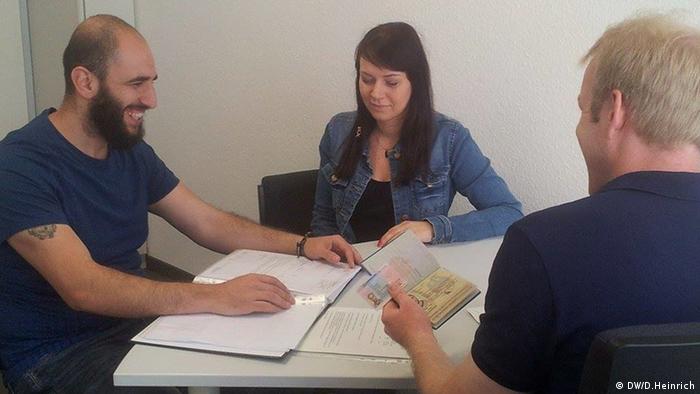 Alaa Houd is cool - he sports a scruffy 10-day beard, has a tattooed right arm, a friendship bracelet on his left wrist and a receding hairline. The 28-year-old is immediately likable.

Back in Syria, he says, he used to work out a lot. "Real bodybuilding," he points out, flashing a smile and flexing his biceps. He still has the shoulders to prove it, although the belly protruding from beneath his T-shirt shows that it's been a while since his last set of sit-ups.

No wonder: Houd has been busy with other things lately, on 10-month journey through countless emergency shelters all over Germany, with stops in Frankfurt, Giessen and Dortmund. Before that, he survived a spectacular escape from his native Syria to Germany, across Lebanon, Turkey and Greece - a trip that included a capsized refugee boat and hours spent adrift in the Mediterranean.

Now, after months of waiting, he's finally been given a provisional passport. Next goal: a job. First point of contact is the job center in Duisdorf, a neighborhood in western Bonn. His appointment, where he'll have his first counseling session to find a job in Germany, starts at 10:30 a.m. sharp - though journalists have to wait outside. "Privacy protection - I hope you understand," says the woman from the employment agency.

After the talk, Houd heads into Ralf Schäfer's office. Schäfer is in charge of refugees at the job center, and he's extremely enthusiastic about the motivation of these new arrivals.

"Many of these migrants are incredibly motivated. They want to get involved, and become a part of our society," he says. Hardly any see themselves as being above "menial" jobs, and that also goes for those with university degrees.

Schäfer can't be discouraged from his positive attitude, and also can't help taking a little jab at the "locals." Diplomatically stated, his message still hits home: it's often more difficult to find jobs for the "regular customers" than it is to find them for "new arrivals" from abroad.

Germany, land of opportunity - with obstacles

Houd desperately wants to start working again. "Sometimes in Syria I had to work three or four jobs at a time. I did everything," he says. Whether working as an IT technician, car salesman or personal trainer, "the main thing was that I could feed my family," he says. "We were never rich, but we had everything that we needed - a nice house, a car."

But the war destroyed everything. "The war doesn't have anything to do with religion. "Islamic State," the Free Syrian Army, Bashar al-Assad - they're all just interested in maintaining their power."

Houd says that life in Syria became a living hell. "Every time I left the house, I was terrified of being killed," he remembers. The dangerous escape, the journey though German refugee shelters: all that was nothing compared to what happened in Syria. That's why he's willing to take any job. "I'll do anything to start with. The main thing is that I can earn some money," he says.

Eritrean translators are deliberately mistranslating the testimonies of refugees during their hearings, according to dissidents' groups in Germany. Some are even intimidating them into hiding human rights abuses. (17.07.2015)

An encounter in northern Germany between a tearful Palestinian refugee girl from Lebanon and Chancellor Merkel has fueled a debate over asylum policy. Fourteen-year-old Reem told Merkel her family faced deportation. (16.07.2015)

Police in Bavaria admit they don't have the resources to fingerprint all newcomers. In the first half of the year, almost 180,000 people - many from Syria and Iraq - applied for asylum in Germany. (13.07.2015)

But the hurdles of bureaucracy are high and almost impossible to manage alone. That's why Claudia Dehn is always at Houd's side. "Claudia's got everything under control," he says with a laugh. Dehn, a resident of Bonn, accompanies him to various agency appointments, deals with official correspondence and often translates. And she does it all on a volunteer basis. "I see so many of the problems that confront those who come to us here in Germany," she says.

Dehn talks about a Facebook group in which many refugees upload highly personal information because they simply have no idea where to turn. They have no one to help them with things like translations, for example.

"Many people might be able to find someone that can accompany them to government offices, but when they get letters from those offices they are all in German," says Dehn.

At the job center one is constantly reminded of the importance of being able to speak German. "The German language is key," says Schäfer. "First the language course, then the recognition of foreign degrees." That can now be dealt with more quickly thanks to changes to existing laws, but it can still take up to a year. And a year is a very long time, especially when bombs continue to fall across Syria every day. 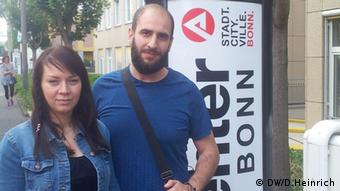 Wife and child in Syria

Houd didn't get a job today. First, he got a stack of forms to fill out for his next appointment. But he isn't about to give up; he knows what his goal is.

"The only reason that I'm here is to make sure that one day my son is better off than me," he says. Suddenly, his self-confident facade begins to quiver, and the look in his eyes hints at the deep pain that he carries inside, constantly tortured by the thought of his wife and son stuck back in Syria.

Communication with them is difficult. "There are always power outages in Syria, and Internet connections are very bad," he says. He wants to get his family to safety, here to Germany, as quickly as possible. He has already applied for papers for his wife and his 3-year-old son. Now he has to wait.

By going to the job center, he has completed the first step toward a new life. "Germany," says Houd "This is my country now."