Thieves have plundered a strawberry field in southwestern Germany almost entirely of its harvest. A similar incident a year ago led to pilfered fruit being hawked on eBay. 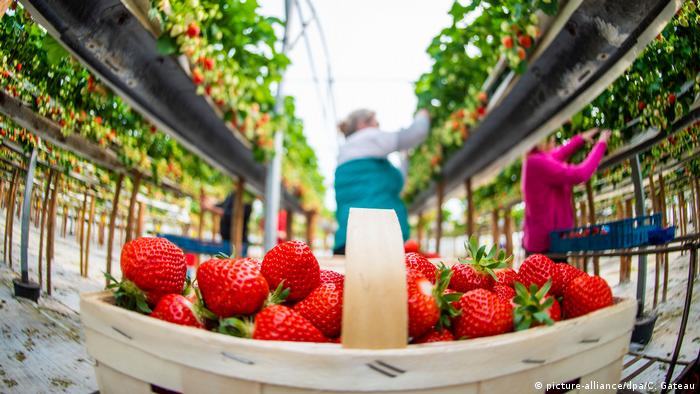 A farmer in Lambsheim, near the southwestern Germany city of Mannheim, has reported the pillage of almost his entire crop of strawberries.

Police said on Sunday the 0.7 hectares (1.7 acres) field was plundered overnight into Friday and that the theft probably involved several people.

Police added that several vehicles must have been used in the illegal harvest and appealed for witnesses to provide any information they have.

The damage was estimated at several hundred euros.

The incident is not a first for German strawberry farmers. Last year, a similar plunder took place in Bad Sobernheim in the same state of Rhineland-Palatinate, according to the TZ newspaper.

The paper reported that thieves rented cars to steal the fruit and then sold them on eBay.

Germany produces some 160,000 tons of strawberries annually, more than two-thirds are for domestic consumption, according to the Chamber of Commerce for Agricultural in North Rhine Westphalia.

Around 35% of the harvest is sold directly to consumers via farm shops and road stalls.

Gardening from the computer

Tens of thousands of critics of industrialized farming have converged on Berlin to renew calls for shifts to eco-sustainable harvests. Visiting Berlin for its annual Green Week expo are 70 agriculture ministers. (19.01.2019)

As the exceptionally dry summer slowly recedes, the extent of harvest losses for German farmers has become fully apparent. The federal government has agreed to step in with financial assistance. (22.08.2018)