Germany Start Cup Campaign in Style Against Costa Rica | News and current affairs from Germany and around the world | DW | 09.06.2006

World Cup hosts and tournament opening act: Germany might have been under pressure but their 4-2 win in the opening match against Costa Rica certainly wasn't wracked with nerves. 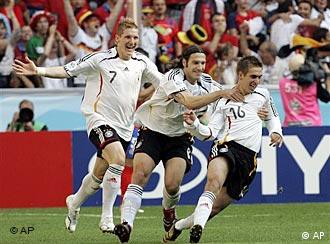 Germany took to the field against Costa Rica in the first game of the 2006 FIFA World Cup with the weight of a nation's expectations resting on their shoulders. As hosts and as tournament openers, everyone was expecting a good performance from Jürgen Klinsmann's team to get the competition off to a flying start. Costa Rica, clear underdogs, were hoping to spoil the party.

As it was Germany started strongly but were not having it all their own way. The early exchanges saw possession flow from one team to the other. That is until the combination of Bernd Schneider and Bastian Schweinsteiger released Philipp Lahm on the left. The nippy defender cut inside his man and launched a curling, long-range shot that cannoned off the post and into the net with just six minutes on the clock.

Germany were soon pegged back when a static defense was caught looking for the linesman's flag and Costa Rica's Paulo Wanchope slipped through the statues to gather the through ball and slip it beyond an incredulous Jens Lehmann on 12 minutes.

The hosts were back in the lead less than five minutes later when Schneider and Schweinsteiger again combined, with the Bayern midfielder threading a ball behind the defense for Miroslav Klose to score from close range. In the second half Klose added a third when he followed up his own header to put the home team 3-1 ahead with an hour gone.

Not exactly cruising, Germany looked safe and they looked like they believed that too when a sleepy back line was again caught out by Wanchope who drifted between Per Mertesacker and Christoph Metzelder to finish past Lehmann with aplomb from six meters out on 72 minutes.

Costa Rica threw everyone forward to get the equalizer but found themselves the victim of a stunning strike from Torsten Frings with just four minutes remaining. Schweinsteiger stroked the ball into his midfield partner's path and without breaking stride, Frings struck a shot from 40 meters out that flew into the top right hand corner to give Germany a 4-2 victory.

Review the action as it happened with the run down from DW-WORLD.DE's Live World Cup Ticker.

Rumors about German team captain Michael Ballack's presence at the World Cup curtain raiser against Costa Rica have been laid to rest -- the star midfielder will be spending the game on the bench. (June 9, 2006)

The waiting is over. Nearly six years after Germany was awarded the 2006 World Cup, the globe's biggest soccer spectacle began in Munich Friday with the hosts playing Costa Rica in the first game. (June 9, 2006)