Germany squad unite behind Gündogan and Can after Instagram ′like′ criticism | Sports| German football and major international sports news | DW | 14.10.2019

Ilkay Gündogan and Emre Can have explained themselves after liking an Instagram post related to Turkey's military offensive in Syria. After criticism from some quarters, the pair have been backed by their teammates. 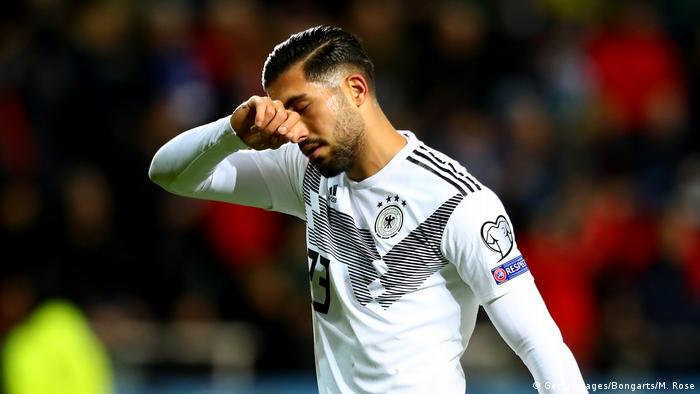 "It was only intended to show support for our friend," Ilkay Gündogan told reporters after a match-winning display in Germany's 3-0 victory over Estonia on Sunday.

The German-born midfielder of Turkish origin was defending his actions after liking a controversial Instagram post which appeared to support Turkey's military offensive in Syria against Kurds.

Turkey international Cenk Tosun, who was also born in Germany, had celebrated his own match-winning display in a 1-0 win against Albania by performing a military salute. His Instagram post was a photo of that celebration and included the caption: "For our nation, especially for the ones risking their lives for our country".

Both Gündogan and Germany teammate Emre Can liked, and then unliked, the post. The pair were criticized by German media, with tabloid Bild saying "Gündogan has learned nothing" in reference to the midfielder's controversial meeting with Turkish president Recep Tayyip Erdogan on the eve of last year's World Cup.

Their social media accounts were also flooded with angry comments from the public, such as "You're just an Erdogan fan boy", "Go to Turkey where you belong", and "Get out of the DFB team." Bavaria's interior minister, Joachim Herrmann, also weighed in on the debate, telling German newspaper Bild that he'd "be happy if members of the German national team had sympathy for the German armed forces."

"The players should be aware of which country they feel connected to. I hope those concerned will think it over."

Gündogan, Can clear the air

"The stories that were written are crazy. I thought that I'd liked a photo of a very good friend of mine, who I lived with in Manchester. He's having a tough time at Everton, barely playing, and then scored a goal and led his team to victory," Gündogan explained.

"There was absolutely no political intention behind it. Emre and I are both against any kind of war and terror, no matter where it takes place in the world.

"About 200,000 other people liked the image, also footballers from around the world. But we were the two picked out and subjected to a story. It's a shame."

Gündogan's explanation was measured, calm and to the point. Emre Can, who had also liked the Instagram post, delivered the same message but with less composure.

"Tosun scored a goal, so I liked his post. It wasn't meant in a political way. I'm against war in any form, I pray every day for world peace," Can said.

Pressed on the issue he stormed off after criticizing the media reaction - "The media always interpret everything critically and I'm not saying any more. I've said enough."

The Germany national team also presented a united front behind the duo. They posted their own photo with the entire on-field and off-field team, with captain Manuel Neuer pointedly embracing both players.

Team manager Oliver Bierhoff said they'd talked to both players and dealt with the topic, saying the social media world was "tough for the boys" to navigate.

"I think it would be a time to give them a little bit of trust and not turn it into such stories," he said. "No one could expect it to take on such a dimension."

"Those who know the players, know they are against terror and war," he said. "They just wanted to congratulate the player they used to play with."

European football's governing body has said it will be looking into the celebration of Friday's victory for Turkey against Albania. Football authorities may take a dim view of the "political gesture." (13.10.2019)

Chancellor Angela Merkel has called for an immediate cessation of fighting in Syria. Clashes between Turkish and Kurdish fighters allowed some 785 "Islamic State"-affiliated individuals to flee a guarded camp. (13.10.2019)

The first female footballers have been inducted into the Hall of Fame of German football. Among the 11 female players honored in Dortmund were Silvia Neid, Steffi Jones and current coach Martina Voss-Tecklenburg. (12.10.2019)