As the World Cup approaches, Germany sealed its preparations with a 2-0 win over Chile. Coach Martina Voss-Tecklenburg was cautious about the team's chances, expecting a tough tournament and upsets. 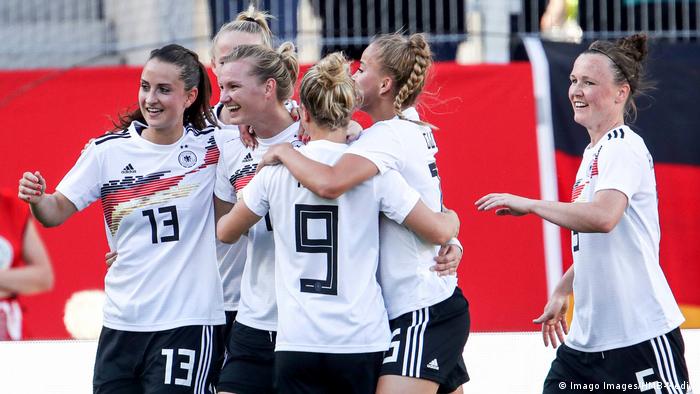 Germany defeated Chile 2-0 on Thursday, in what was their last warm-up match before the team competes in the Women's World Cup 2019 in France, which is set to begin on June 7.

In front of 10,135 spectators in the Bavarian city of Regensburg, the reigning Olympic champions delivered a commanding performance, controlling the game and keeping most of the activity in their opponent's side of the field.

Germany took the lead in the first half when Captain Alexandra Popp channeled a corner kick into the goal in the 29th minute.

Just before half-time, full-back Carolin Simon added to the count with a looping cross that landed at the far corner, hitting the inside of the post and bouncing in.

Read more: Germany's women: 'We don't have balls, but we know how to use them'

The team is currently ranked number 2 in the world by FIFA going into the World Cup, just behind the United States. Germany will be lead by Popp and midfielder Dzsenifer Marozsan, who plays for Champions League winning team Olympique Lyon.

Star goal-keeper Almuth Schult's participation in the World Cup has been unclear, as she continues to recover from a shoulder injury. But it was good news for Germany that she appeared in the starting lineup on Thursday.

Coach Martina Voss-Tecklenburg told German broadcaster ARD after the match that she was satisfied with the team's performance. "A win is always important for your head, but we are also pleased with how we went about it today," she said.

But Voss-Tecklenburg acknowledged that her team still needed to work on scoring precision, in light of many missed opportunities of the offense in the second half.

Read more: Alexandra Popp: A World Cup win would be the jewel in the crown

Germany's coach tampered down expectation and was cautious about her team's chances, stressing that Germany will face a wide variety of contenders at the tournament.

"Aside from USA, France and the Netherlands, teams like Australia, Canada, Sweden and Norway are also playing very well," Voss-Tecklenburg said.

"It will be a very tight tournament, and I think there will be some upsets in the group stage," she added.

Germany are favorites to sail smoothly out of their group. They will face Spain on June 12 in Valenciennes and then South Africa on June 17 in Montpellier.