According to leading economic institutes, Germany's deficit will surpass 3 percent next year, meaning that the euro zone's biggest economy is on the verge of breaching the Stability and Growth Pact for the fourth year. 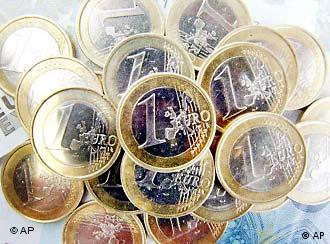 The Stability Pact was designed to protect the value of the euro.

On Tuesday, Germany's leading economic think tanks released a report that could burst Berlin's budgetary bubble and draw criticism from Brussels. According to the annual spring economic forecast, the country's top six economic research institutes predict that the deficit ratio would remain far in excess of the ceiling set by the EU's Stability and Growth Pact.

Under the terms of the 1997 budgetary guidelines, drawn up at the behest of Germany itself as a means to stabilize the euro and ensure weaker economies don't pull the region down, euro zone members are prohibited from running up public deficits in excess of 3.0 percent of gross domestic product (GDP).

Germany, however, already violated the rules in 2002 and 2003, when its deficit soared to 3.5 percent and 3.9 percent respectively. Since being admonished by Brussels and threatened with sharp financial penalties, Berlin has pledged to reign in its spending and bring the deficit down to under the three-percent mark by 2005.

But the six economic forecasters are predicting a different picture. They are penciling in a deficit ratio of 3.7 percent in 2004 and 3.5 percent the year after. "This implies that the upper limit stipulated in the Stability and Growth Pact will be exceeded for the fourth consecutive year in 2005," Tuesday's report stated.

A failure to lower its deficit would mean Berlin would break its pledge to its European partners and once again send a message to Brussels that the euro zone's largest economy is incapable of budgetary discipline.

In addition to breaking promises, the poor prospects for Germany's public finances are likely to re-ignite the debate about the relevance of the unpopular Stability Pact. The credibility of the budget rules suffered a heavy blow last year when EU members decided not to sanction France and Germany even though the two countries' deficits violated the pact. Berlin and Paris were effectively let off the hook in return for pledges to get their finances in order by 2005.

The move triggered an EU crisis, pitting smaller euro zone countries, who had consistently tightened their belts to correspond to the budget guidelines, against the bigger "budgetary sinners" like France and Germany who repeatedly flaunted the rules. The member states' decision to waiver the penalties also antagonized the EU Commission, who wanted to make an example out of the two deficit violators.

The Commission subsequently filed a lawsuit against the member states for failing to adhere to its executive ruling. On April 28, the European Court of Justice in Luxembourg will begin hearing the case.

The news of Germany's likely repeat breach of the pact in 2005 has brought the entire nature of the pact into question and have left some calling for a revamping to enable it to take into account more of the ups and downs of the economic cycle.

The new EU Commissioner for Monetary Affairs, Joaquin Almunia, on Tuesday called for a re-evaluation of the Stability Pact and a possible, albeit careful, reform. "The experience of the last year has shown that something must be changed," he said but stopped short of calling for a lifting of the three percent limit.

Finance ministers from the 12 member euro zone agreed by majority on Tuesday to suspend disciplinary action against Germany and France for failing to reign in their budget deficits below the three percent GDP limit. (Nov. 25, 2003)