Massive fires are ravaging Greece. Germany is sending teams and vehicles to help contain the blazes. 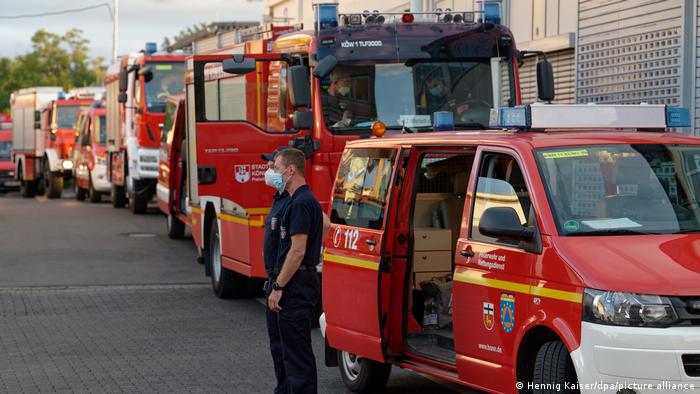 Getting ready for the trek to Athens

German firefighters from the state of Hesse are traveling via land to areas in Greece that have been hit by wildfires. They are expected to arrive on Thursday.

"It's the longest drive we've ever had," Ralf Ackermann, the president of the Hesse Fire Brigade Association (LFV), told the Hessenschau TV news broadcast. The German state has sent 164 firefighters, paramedics and logistics specialists, along with and 27 vehicles, to Greece. 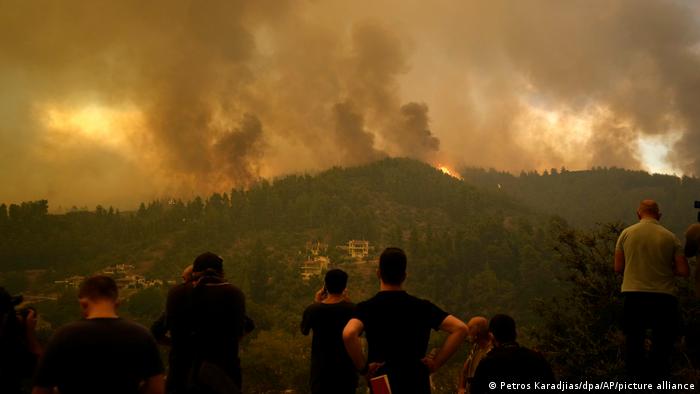 Flames and smoke over the island of Euboea

Special fire trucks suitable for difficult terrain are part of the deployment. "Because of the vegetation, the force of the fire is very different from what we know in Germany," Ackermann said, adding that the flames sometimes jump from one tree to the next.

A team from Bonn, in the western state of North Rhine-Westphalia, has arrived in Greece with a convoy of 17 vehicles and 52 emergency workers. "We hope that, at the end of this mission, everyone will come home safe and sound," Carsten Schneider, deputy chief of the Bonn municipal fire brigade, told the public broadcaster WDR. Highly trained specialists are headed to Athens, he said, adding that still, the mission is not without risks.

"We are working at the EU level with other countries and are under the authority of the Greek department," Schneider said. The team is self-sufficient — firefighters are equipped with tents and food and can set up camp anywhere and provide for themselves. Because of the intense heat, their protective clothing is thinner. Everyone speaks fluent English, he said.

The German dispatch of 221 rescue workers is a response to a Greek request for help — or rather, a request from Brussels, where the EU's Emergency Response Coordination Centre (ERCC) is arranging the mission. In addition to the firefighters from Hesse and North Rhine-Westphalia, the German Federal Agency for Technical Relief (THW), which specializes in disaster relief operations, has also sent a team.

The joint situation room run by the German federal and state governments with the Federal Office of Civil Protection and Disaster Assistance (BBK) received Greece's call for assistance. The EU is footing the bill for the transport costs. The German government is paying for the mission on site in Greece. It is still unclear whether Greece will accept Germany's offer to provide firefighting helicopters. Other countries are already using them to help contain the flames.

Twenty nations are currently participating in the firefighting efforts in Greece, including non-EU countries such as Israel and Kuwait. Some nations have sent firefighting aircraft. Germany has no such planes — a long-standing bone of contention for the Greens. The party long ago urged the German government to acquire a firefighting aircraft, according to Franziska Brantner, the Greens' spokeswoman for European policy. The plane would have been meant not just for operations in Germany, but "also for European solidarity," she said.

The mission shows "that we Europeans are united by more than just treaties: In times of need, we stick together," said Lucia Puttrich, Europe minister in the state of Hesse.

Christoph Hoffmann, a lawmaker with the neoliberal Free Democratic Party, was critical of how the assistance from so far away has been organized. "Instead of overland routes, large transport planes should be used," he said.

Two weeks are currently planned for the mission, including the travel to and from Greece — which leaves one week for the on-site operation.