The number of election-related crimes in Germany appears to have increased significantly since the last general election. Leading politicians have reported hostility and physical attacks 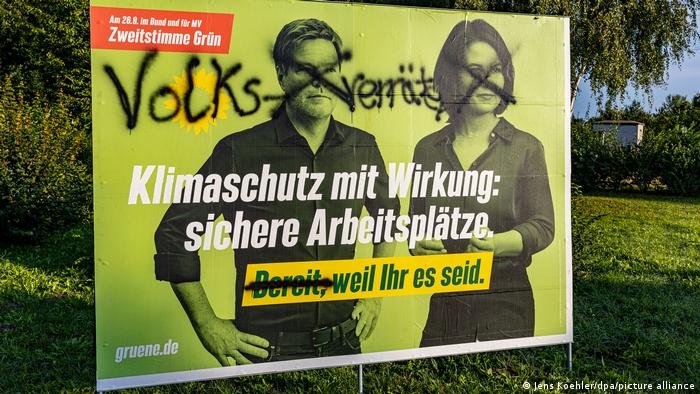 A report by the German newspaper Welt am Sonntag (WamS) found that Germany's federal election campaign has been particularly aggressive this year.

Politicians also say they have experienced a worsening atmosphere in terms of insults, acts of vandalism and threats.

What did the figures show?

The newspaper gathered data from 16 state criminal investigation departments which showed more than 4,200 offenses in connection with the election campaign.

In the week before Germany's 2017 vote, the Federal Criminal Police Office (BKA) had logged around 3,660 such crimes.

According to the survey of the state criminal investigation offices, the crimes identified were primarily damage to property, especially election posters.

However, there was also many violent crimes and the spreading of illegal content and insults were also significant.

The interior minister for the German state of Hesse provided no specific information.

Some of the illegal acts were also related to other election campaigns, such as those for the state votes in Mecklenburg-Western Pomerania and Berlin, which are also due on Sunday.

The degree of abuse faced by particular parties varied from state to state.

In the city-state of Hamburg, for example, it was Angela Merkel's center-right Christian Democrats (CDU) that was primarily targeted.

In Lower Saxony, the Left Party was most frequently the subject of attacks while in Berlin it was the far-right Alternative for Germany (AfD).

WamS' findings corresponded with those of the Federal Criminal Police Office (BKA). An internal situation picture of the authority, which is available to the editors, showed some 4,035 crimes (including Hesse) by mid-September.

Among them are also 42 violent crimes. Authorities were unable to attribute almost two-thirds of the crimes (2,590) to any political direction. The remaining offenses appeared to come mainly from the extreme left (1,170) and extreme right (273).

Health Minister Jens Spahn from the CDU told WamS that the atmosphere in recent months has been heavily charged.

"This is the first election campaign in which I've seen larger groups of often aggressive disruptors appear at virtually every public event," said Spahn.

A kind of "pandemic extremism" has formed in Germany, he said, with certain groups stirring up public feeling against necessary public health measures. "And the cycle of agitation and hatred turns into crimes," Spahn continued.

Free Democrat Bundestag candidate Jan Maik Schlifter from Bielefeld, like other politicians, reported that posters had been set on fire and daubed with graffiti.

"I've also never seen personal slogans like 'off to the gulag' on any of my posters before," he said

The Left Party politician Susanne Ferschl from Bavaria reported broken window panes. "Tuesday night, the window front of the Augsburg party office where I am a subtenant was smashed," she said. "The attack is one in a series of attacks."

The Social Democrats' health expert Karl Lauterbach said he had never seen such a toxic election campaign. "Posters are regularly cut up, smeared with insults and Nazi slogans," he said.

Meanwhile, Green party lawmaker Cem Özdemir, a former coleader of his party, also reported a large number of hostilities. In his case, he said, the perpetrators were mainly German right-wing extremists and Turkish fascists.

Özdemir also highlighted the "Querdenker" movement of COVID deniers as a new source for stirring up political violence.

He underlined the comments with reference to a 20-year-old gas station employee who was killed in the western town of Idar-Oberstein last week for asking a customer to wear a face mask.