Germany sees new refugee arrivals via Poland and Belarus | Germany | News and in-depth reporting from Berlin and beyond | DW | 23.10.2021 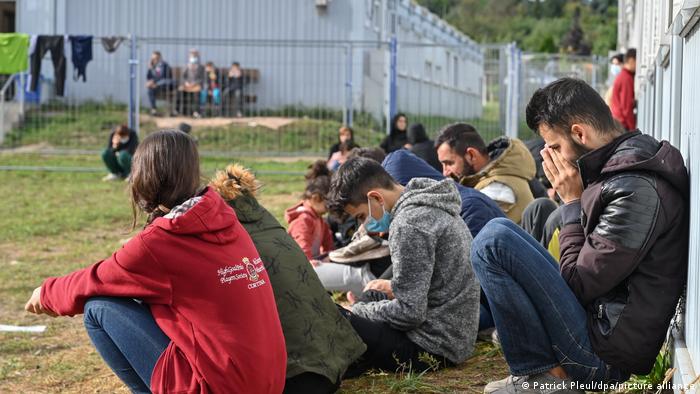 The number of refugees at the Eisenhüttenstadt facility is rising

Until now it was an entry point that was only rarely used by refugees from countries like Syria and Iraq. But in the last few months, the route through Belarus and Poland to eastern Germany has seen a lot more refugees trying to enter the EU.

Most eventually arrive in the German state of Brandenburg, which borders the capital Berlin. In August, 209 people were picked up at the border; the number rose to 1,164 in September. So far in October, there have been around 2,000.

Apart from Brandenburg, there are two other German states that border Poland: Mecklenburg-Western Pomerania and Saxony. In total, the border is 460 kilometers (286 miles) long. According to border police, there have been over 6,000 illegal border crossings this year, mostly by individuals from Syria or Iraq.

Dealing with the situation in a humanitarian and legal way is a challenge, especially as many fear it will only escalate the siuation further.

Many Germans remember the situation in 2015-2016 when hundreds of thousands of refugees arrived in Germany. So far in 2021, there have been 80,000 new asylum applications — far fewer than during that time.

But some politicians, like Ralph Brinkhaus, parliamentary spokesman for the conservative Christian Democrats, warn that the number would increase. He said that the situation "could develop" and added that in 2015 people did not pay enough attention to "early indicators." That should not be repeated, Brinkhaus believes.

This is a "big challenge" but is "not at the same level we saw in 2015," Saxony's Premier Michael Kretschmer said. But he added that capacities have to be increased and people have to be "properly housed."

For initial accommodation, there are four facilities set up in Brandenburg. The state does not yet seem unduly alarmed by the rising numbers of refugees, and is receiving enough financial aid from the federal government.

In the city of Eisenhüttenstadt, near the border, Olaf Jansen is head of the initial reception facility. There, they offer support for hearings, registrations, and the filing of asylum applications.

There is absolutely no question of an impending collapse, as some media have reported, Jansen explained.

"We have learned from 2015 and are prepared for such situations. Our goal is to know exactly who arrives here and in what condition," he said.

At the moment, the main challenge is pandemic management, according to Jansen. Belarus is a high-risk area. Refugees who have been there must be quarantined on a staggered basis after their arrival. But capacity is limited.

"There are about 1,600 people here now — the capacity is about 2,100," Jansen said. To fundamentally resolve the situation, Jansen believes more diplomacy between the countries is needed.

The border will not be closed

Away from the facilities, there is also management to be done at the border. Currently, eight 100-strong police squads are on duty. However, the federal police union admitted that on the other side of the border, controls were only selective.

"With this search corridor, the risk is very high that there will be uncontrolled immigration after all," said Heiko Teggatz, chairman of the union. The situation in Poland is also tense, he added. "That's why we need a second control line on the German-Polish border."

The German government is discussing what such a "control line" might look like. For example, there are to be joint patrols primarily on Polish territory.

This would "identify possible border crossers, but also to arrest smugglers," Seehofer said. However, Polish authorities still have to agree to this arrangement.

There will be no closing of the border, German Interior Minister Horst Seehofer has said, and on that point there is widespread agreement. Border closures also have far-reaching consequences for the economies of both countries. Miles of truck traffic jams could significantly impede the movement of goods. Corresponding images from the particularly critical phase of the coronavirus crisis are still in people's minds.

The current situation at the German-Polish border also touches on fundamental migration policy issues in Europe. According to EU law, those seeking protection must file their asylum application in the EU country they enter first.

But this arrangement, called the Dublin Regulation, no longer works in many places, Seehofer said in Berlin. Many refugees do not stay in their first country of reception, Poland, but travel on to Germany.

"We are now sending some of the people back to Poland so that the Polish authorities can take care of them," FDP politician and member of the Bundestag, Alexander Graf Lambsdorff, told DW.

'Migrants as a political weapon'

The German government believes Belarus is to blame for the developing situation. This is "a state-organized, or at least state-supported, smuggling activity" by the Belarusian government, Seehofer said. "Migrants are being used as a political weapon — this is a form of hybrid threat."

President Alexander Lukashenko had said in response to EU sanctions that he would no longer stop migrants heading to the EU. But Russia also plays a role, Seehofer said. He said he could hardly imagine that this was happening without approval from Moscow.

In the Bundestag, this assessment is shared with regard to Lukashenko.

"We have to get to the root of the problem, which is human trafficking by an authoritarian leader in Belarus," SPD parliamentary group foreign policy spokesman Nils Schmid told DW. "If we want to stop this, we must prevent airlines from third countries from bringing refugees to Belarus and then sending them to the EU border via Belarus."

According to Seehofer, this has already happened in the case of an airline from Iraq. Germany is now hoping for further help from the EU — including possible new sanctions against Belarus and problematic airlines.

EU leaders have started their second day of talks in Brussels, with refugees and migration high on the agenda. Energy discussions on the first day of the summit were overshadowed by a bitter debate over the rule of law.