Parliamentarians in Berlin have begun the often arduous process of hammering out Germany's 2015 budget. For the first time since 1969, Finance Minister Wolfgang Schäuble is aiming for a bottom line written in black ink. 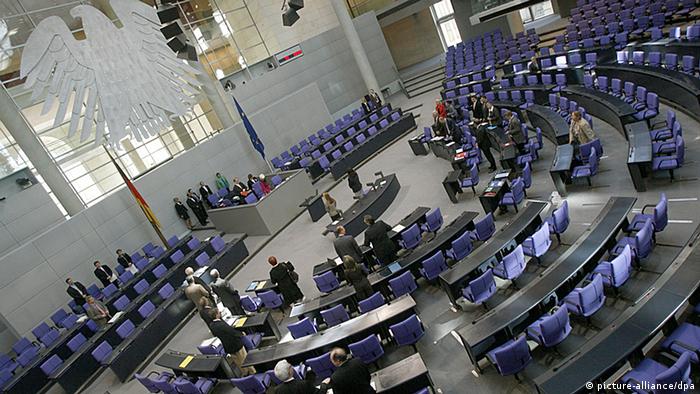 Wolfgang Schäuble's first budget proposal for 2015 foresees total federal spending just shy of 300 billion euros ($386 billion) - a figure below predicted government revenues. It's Germany's first budget in 45 years that does not predict that adoption of any new sovereign debts. Thanks to rising tax revenues and rock-bottom interest rates, Germany now also expects a budget surplus for 2014, but this was not initially predicted.

The conservative finance minister's broader fiscal plans through 2018 are also up for discussion in the Bundestag; Schäuble expects the remaining years of the legislative period to boast balanced budgets as well.

Schäuble told parliament on Tuesday that geopolitical tension and Europe's persistent economic problems meant it was important for Germany to focus on balancing its books. "Anything else would lead to a new investor confidence crisis," Schäuble said.

The 2015 budget had come under fire from the opposition parties prior to the debate. The Green party's budgetary spokesman Sven-Christian Kindler told the DPA news agency that "the hidden debts, racked up via infrastructural decay, continue to rise." Kindler argued that the budget was short-sighted, saying the lack of "investment in the future" would hurt younger Germans.

"Even while sticking to the 'debt brake' now within Germany's Basic Law, the state could have invested an extra 10 billion euros per year," Bofinger said. German law was recently changed to incorporate a limit to annual government debt intake; the country's national debt stands at over 2.1 trillion euros, around two-thirds of annual GDP.

Schäuble, however, rejected opposition calls for "the mobilization of ever more public money and ever higher public debt," saying they would put the German economy on the wrong path. "Growth and jobs are not generated by rising deficits."

'Soli' for the scrap heap?

According to a report in Tuesday's Passauer Neue Presse newspaper, Schäuble was also planning to abolish Germany's so-called "solidarity surcharge" (Solidaritätszuschlag in German), but to counterbalance this with additional direct taxation. The Solidaritätszuschlag, or "Soli" in common parlance, was introduced in 1991 - primarily labeled as a tax to cover the costs of development in former Communist East Germany after reunification.

The payment is calculated as a percentage (unchanged since 1998 at 5.5 percent) of an individual or business' tax bill. It does not affect people earning less than 1,444 euros per month before tax, which is roughly half of the mean monthly income in Germany.

Often legally challenged over the years, a 2013 YouGov poll suggested that just over half of residents of former East Germany advocated scrapping the payment, while a vast majority supported its abolition elsewhere in the country.