The "Swiss Crystal" passenger cruiser hit a motorway bridge pylon near Duisburg, injuring around 25 people. Another ship helped the passengers to safety. 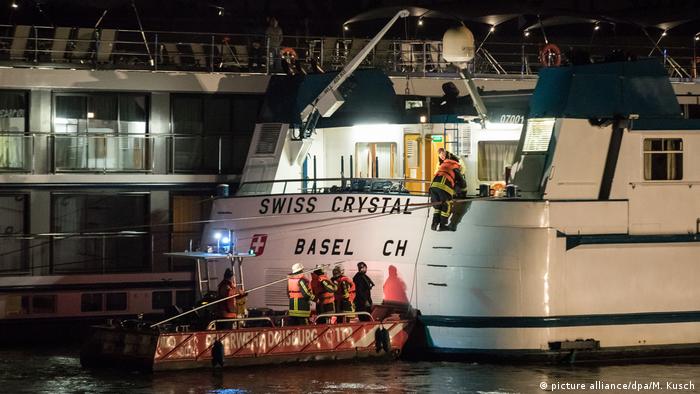 The accident happened late Tuesday on the Rhine River near the north-west German city of Duisburg.

There were 129 people on board the ship when the vessel hit a supporting pillar of the A42 motorway.

Four people were taken to hospital with serious injuries while 20 others were slightly hurt. A police spokesperson told the Germany's Deutsche Presse Agentur that none of the injuries appeared fatal.

Another nearby ship helped to take the injured off the "Swiss Crystal." A number of fire department boats were also involved.

The A42 is expected to remain closed on Wednesday as structural engineers carry out safety checks.

The "Swiss Crystal" was completed in the year 1995 and was completely renovated in 2007. The 101 meter (330 foot) long vessel, owned by the Swiss shipping company SCYLLA, sails out of Basel. The ship involved in Tuesday's accident was en route to the Netherlands.

According to Duisburg emergency services, the tour operator offered passengers the chance to complete their journey in a replacement ship. Guests were also offered hotel accommodation for the night, as well as other means of transport back to their respective homes.