Authorities found documents and cases with unknown liquids purported to belong to the defunct far-left terrorist group Red Army Faction, dating back to the 1980s. Three members of the organization are still at large. 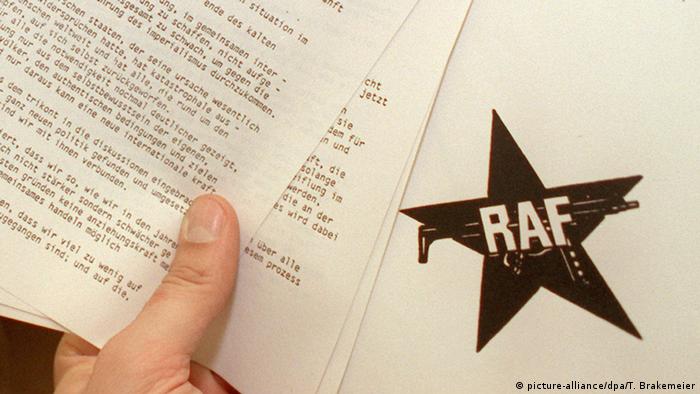 Forestry workers near the German city of Hamburg found a barrel containing material that belonged to the far-left Red Army Faction (RAF) group, police in the state of Lower Saxony said on Sunday.

Workers were pruning trees in the Seevetal area, south of Hamburg, when they found the plastic barrel, which included documents from the 1980s and containers with unknown liquids.

"After an initial assessment of the written material that was found, a connection to the nationwide terrorist group RAF cannot be ruled out," Lower Saxony criminal police said in a statement.

No weapons were found and experts determined that the barrel could be moved safely, so that authorities may carry out an investigation, officials said.

"It is evidence that will be taken to the forensic institute," authorities said, adding that DNA or fingerprint traces may still be detectable.

The RAF was a terrorist group that emerged from German student protests against the Vietnam War and was most active in the 1970s and 80s.

The group is responsible for a violent campaign against capitalists and what members considered cooperators of US imperialism.

Some 34 people were killed and injured hundreds in the various terrorist activities that the RAF carried out within Germany, before officially disbanding in 1998.

But authorities have ruled out the possibility that Sunday's discovery could provide clues as to their whereabouts, due to the age of the documents.

The trio are wanted for more recent crimes. They are linked to a series of twelve robberies between 1999 and 2016, which authorities say they carried out in order to finance their life as fugitives.