German police in North Rhine-Westphalia have thanked a man for stepping in to restrain the assailant of a knife attack that took place on a city bus. The man came to Germany from Syria in 2016. 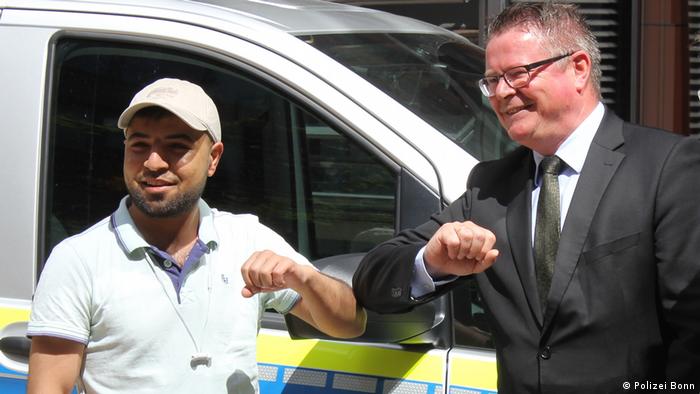 Police on Wednesday thanked a young man for restraining the assailant of a knife attack on a bus in the western German city Bonn, likely saving the victim's life.

"It was a matter of life and death," said Bonn chief of police Frank Hoever in a ceremony thanking 28-year-old bystander Ahmad Al-Sheikh.

According to witness testimony and security camera footage, Al-Sheikh was riding the bus and about to reach his stop when a commotion began in the back of the bus..

The 28-year-old said he then saw a man repeatedly stabbing another man who was lying on the floor.

Al-Sheikh ran to the back of the bus, where he pulled the attacker away from the victim and pinned him against a handrail until the police arrived on the scene.

At that point, he and two other bystanders administered first aid to the victim.

Al-Sheikh is currently completing a training program in Bonn for a qualification as an anesthesiology assistant.

"He restrained the assailant until the police arrived and certainly prevented worse from happening," said police spokesman Frank Piontek.

"I didn't think twice about it," Al Sheikh said. "I had to help the young man. I hope he gets well soon."

Al Sheik came to Germany from Syria in 2016. 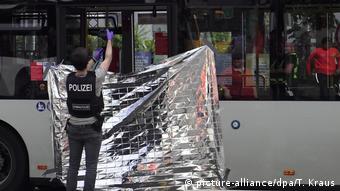 According to the Bonn transportation authority, the driver had not been aware of what was taking place in the back of the bus. After passengers alerted him to the attack, he stopped the bus and contacted the authorities.

On the scene, paramedics treated the 22-year-old victim before taking him to a hospital. His doctors said he has since left intensive care but will need to remain in hospital for the time being.

The 55-year-old assailant is being held in police custody. The reason for the attack remains unclear.

Knife attacks like the one in Bonn have been featured prominently in European media in recent years, with far-right parties often tying the supposed trend to immigration. However, a report from German news site Tagesschau in April said there was no clear pattern of an increase in such attacks in Germany.

Police in Gelsenkirchen said the alleged perpetrator was attacking officers when he was shot. A similar incident in France saw another alleged attacker shot and injured by police.

A man who used a samurai sword to kill his former flatmate in Stuttgart will spend his sentence at a psychiatric hospital. The judge had described the brutal murder as a "deeply wretched" act.