Officials were targeting an international money laundering network suspected to have been used to launder money. It's thought the system could have been used to clean up criminal cash, and — in some cases — to direct money to terror groups.

The raids, at around 80 different locations in North Rhine-Westphalia, Lower Saxony and Bremen, were aimed at collecting evidence and seizing illegal assets. At least 11 suspects were arrested.

"That was a damn huge thing today, which was worked on for a long time and under strict secrecy," NRW Interior Minister Herbert Reul said on Wednesday.

Investigators with the public prosecutors in the western city of Düsseldorf had spent months investigating and collecting evidence against the suspected criminal gangs.

The raids were said to have been particularly focused on that city along with nearby Wuppertal.

According to preliminary estimates, the transaction volume during the investigation period amounts to around 140 million euros

"More than 60 million euros each passed through the hands of the two main suspects alone," Reul said. The laundered money was mainly transferred to Turkey and Syria, he added.

According to preliminary estimates, the transaction volume during the investigation period was about €140 million (more than $160 million).

"More than 60 million euros each passed through the hands of the two main suspects alone," Reul said. The laundered money was mainly transferred to Turkey and Syria, he added. 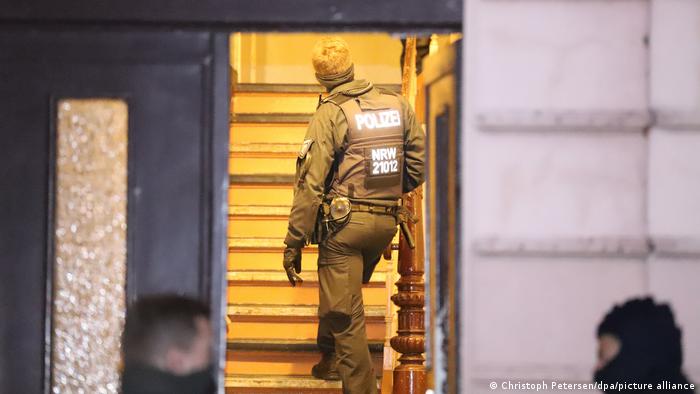 According to police, the large-scale operation was directed against 67 suspected members of a network that has been operating internationally since 2016.

The majority of the 67 suspects are Syrian nationals. The remaining suspects have either German, Jordanian, Lebanese, Turkish or Ukrainian citizenship, Reul said.

Two of the arrested suspects had previously been classified as Islamist threats.

The suspects are also accused of wrongfully receiving social benefits, and failing to comply with social security and tax obligations. The allegations also include acts of violence such as armed robbery and hostage-taking to collect existing and alleged debts.

The investigation is said to have started with a chance encounter, according to the news organization WDR.

Customs officers stepped in to help when a car was driven into a ditch at a highway exit near the German-Dutch border.

They offered to help two men who appeared slightly injured but refused any assistance. Realizing that something was wrong, they took a closer look at the car and discovered a gym bag with €300,000 (almost $350,000) inside.

One of the occupants was a Syrian national, Halid A., who was in the sights of the authorities for some time. He was already suspected of having supported "Islamic State" fighters in the Syrian province of Idlib. Until then, however, the suspicions were not enough for an arrest warrant.

Also in the vehicle was a German national, Manfred T., who, it's thought, was not on the authorities' radar.

Officials suspect money came from the Netherlands and that it was set to be transferred by the illegal hawala transfer network. The system uses a huge number of money brokers to move cash value illegally, avoiding traditional banking and financial systems.

The investigators placed the pair under investigation and discovered they were part of a larger group collecting money from refugees in Germany to send to Turkey or Syria. Some wanted to support their families with it.