Germany Plans Billion-Euro Investment in Universities | Germany| News and in-depth reporting from Berlin and beyond | DW | 22.12.2005

The German government plans to spend an additional 6 billion euros ($7 billion) in research and development by the end of 2009. 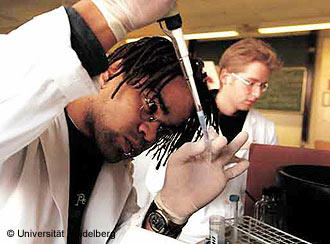 Researchers in Germany may soon benefit from an injection of funds

German Education and Research Minister Annette Schavan said the money was needed to keep the country's universities competitive on an international level.

"We must secure Germany's future as a place of innovation where outstanding scientists are forged," Schavan said in a newspaper interview on Thursday.

The huge financial boost was part of the 25-billion-euro investment program the governing Christian Democrats and Social Democrats agreed upon in their coalition deal, Schavan said.

The plans for the next four years will be finalized by mid-February and focus on life science, health, and nano- and automotive technologies, she added.

The previous red-green government had agreed with states to spend 1.9 billion euros ($2.45 billion) over six years to improve the country's academic institutions. The federal government was to contribute 75 percent of the money.

The plan represented a compromise between federal and state governments after the latter had opposed a federal push for 10 elite universities throughout the country.

This month marks 40 years since the birth of Germany's young researchers competition. "Jugend forscht" is designed to both trigger a scientific interest among youngsters and promote long-term research in the country. (Dec. 15, 2005)