Germany is set to launch a series of projects in Turkey and Lebanon to help them cope with an influx of Syrian refugees. The two countries, which share borders with Syria, have borne the brunt of the refugee problem. 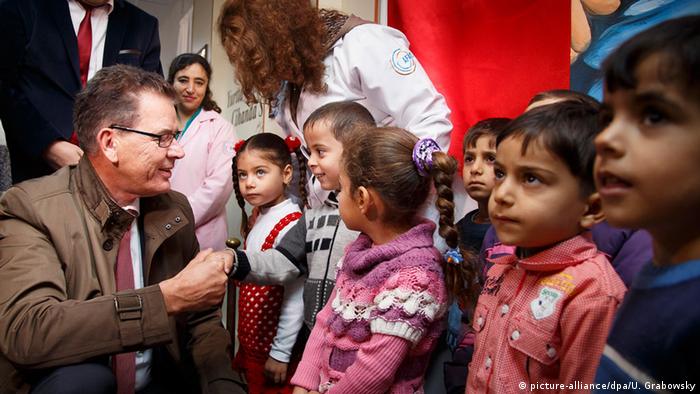 Development Minister Gerd Müller (pictured above, left) announced plans on Friday for the German government to set up its first aid projects for Syrian refugees in both Turkey and Lebanon.

Speaking following a meeting with the governor of Turkey's Kilis province, which borders on Syria, Müller said that his ministry would build numerous community centers in towns which have taken in particularly high numbers of refugees fleeing Syria's four-year-old conflict. Among other things, the aim of the community centers is to help reduce tensions between the refugees and local populations.

Müller also said that in cooperation with the German Society for International Cooperation (GIZ), his ministry would invest 1.4 million euros ($1.51 million) in the renovation or expansion of a number of schools for refugee children.

Also planned are projects to improve water delivery infrastructure in both countries, as well as improvements designed to support local agriculture.

Müller wrapped up his three-day visit to Lebanon and Turkey by visiting the Oncupinar refugee camp, which currently houses 13,000 refugees from the Syrian war.

The two Syrian neighbors have borne the brunt of the refugee problem sparked by the conflict, which began as a peaceful pro-democracy uprising against President Bashar al-Assad in early 2011.

According to the United Nations' refugee agency (UNHCR), there are now more than 1.7 million registered Syrian refugees in Turkey and 1.1 million in Lebanon.

Syria's president Bashar al-Assad is taking measures to head off increased unrest. He has announced plans to investigate protester deaths and whether to lift emergency law. (31.03.2011)

Lebanon has announced plans to increase restrictions on Syrians trying to enter the country. The move signals an attempt by Beirut to limit the influx of refugees fleeing the Syrian civil war. (03.01.2015)