It cost over €1 billion ($1.13 billion) to build. It will house around 4,000 secret agents. It covers an area the size of 36 soccer pitches. The new headquarters of the German Intelligence Agency (BND) has completed its move from Pullach, on the outskirts of Munich, to the center of Berlin, close to the former Wall.

The idea of a secret service is traditionally viewed critically in Germany, evoking memories of the Gestapo or the Stasi. A huge new building in the beating heart of Berlin carries huge significance — a bold statement of Germany's renewed confidence in its global role. So how did the intelligence agency make its move from the provinces to the capital?

In 1996, Hansjörg Geiger was well ahead of his time. Although the Cold War between East and West had been over for a number of years, it was still tangible at BND headquarters: "Accomodation for civil servants" read a sign in front of an old Nazi settlement in Pullach. Was this where the new BND president was supposed to work? Preposterous, Geiger thought. For 40 years — the agency was established in 1956 — Germany's foreign intelligence agency had been obfuscating its name.

Geiger recognized the need for concealment, but this  went too far. He promptly had the sign removed. From then on, everyone who approached the imposing complex in the Isar valley would know who really resided there: the German Intelligence Agency. Even flower boxes suddenly appeared: The odd dash of color couldn't do any harm in this gloomy environment. The newly-appointed BND chief quickly gained a good reputation. Even the Süddeutsche Zeitung daily, tradionally wary of secret services, praised Geiger as "competent, accurate and refreshingly outspoken." 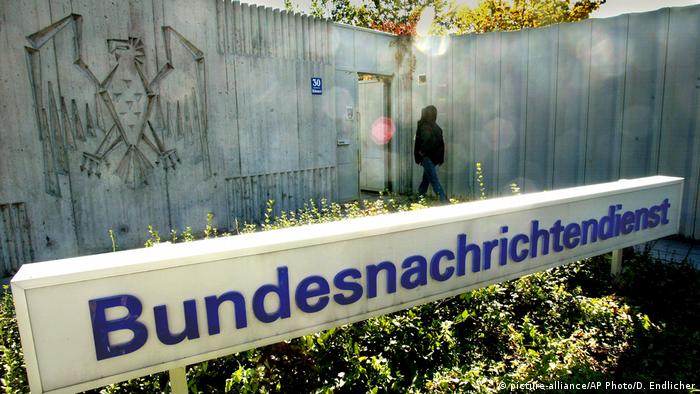 Geiger, a doctor of law, was hardly concerned with his own image — he wanted theof the agency to change. His message to the 6,000 employees: "You don't need to be ashamed of what you do." The agency, which is controlled by the chancellery, should be perceived by the public for it really was, Geiger told DW: "A large, constitutional agency working in Germany."

The new man at the top quite literally opened the agency's doors, even inviting journalists to take part in a BND briefing. Germany had never before experienced such a degree of transparency with respect to its secret services. The opening of the Stasi files after the fall of the Berlin Wall remains an outlier because its aim was to contribute to the reappraisal of the East German dictatorship and its notorious secret police. In the early 1990s, Geiger made an important contribution in this area too, holding a key post in the commission which investigated the activities of the Stasi. He worked under Joachim Gauck, who would become German president in 2012.

'Not stewing in its own juice'

As BND head, he then broke another taboo. Just after assuming the post, he publicly made a case for "the BND to be moved to the seat of the government." In 1996, that meant Bonn (Germany's capital from 1949), but of course he had Berlin in mind. The decision to eventually move parliament and government had been taken in 1991. Geographical proximity to those in power would lead to improved collaboration between the BND and policymakers, Geiger believed. The agency could address the government's needs, rather than "stewing in its own juice." 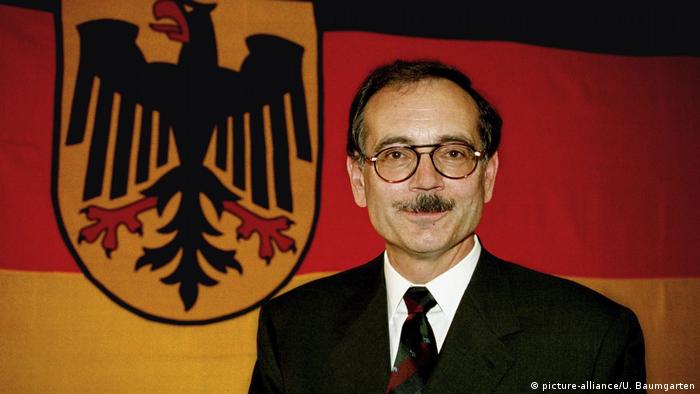 Seven years would pass before concrete plans materialized. In 2003, Geiger was serving as deputy Justice Minister. The Islamist terror attacks on September 11, 2001 had convinced even the remaining skeptics that the time had come to take the BND headquarters to Berlin. The move from Pullach to the capital, however, turned out to be a never-ending story of delay after delay, due to safety concerns and construction mishaps.

There were plenty of parallels with Berlin's unfinished airport and Hamburg's Elbphilharmonie concert hall — two other German signature projects which saw schedules and costs spiraling out of control. But on February 8 Chancellor Angela Merkel eventually inaugurated the BND's new Berlin headquarters. And in the spirit of its former president, the agency opened its doors to the public, on a virtual level at least: Those who wished to do so could listen to Merkel's words as they were streamed live. 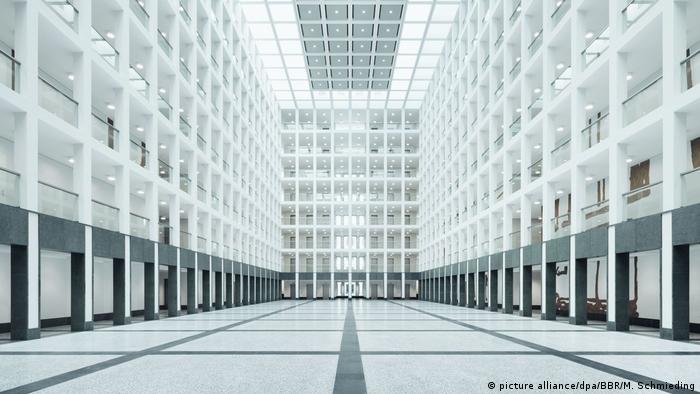 Out of the shadows, into the light: An interior view of the new BND headquarters

Geiger is deeply convinced that, after its arrival in Berlin, the BND will be "taken more seriously." In the capital, it will be able to "respond immediately and quickly" to current issues. For Geiger, the BND is a "service provider," directly embedded in the government's decision-making process. The description also appeals to the current agency head, Bruno Kahl, and Armin Schuster, chairman of the intelligence agency oversight committee in parliament (PKGr).

Speaking to DW, Schuster, a member of Merkel's Christian Democrats, also uses terms like "customer" and "heart chamber," referring to the federal government and the BND's presence in the government district. This sort of proximity, he estimates, will be "very fruitful" for both sides. Schuster also believes that it will lead to better cooperation with parliament. 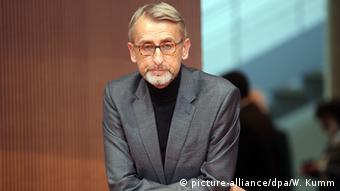 Schuster would have preferred the country's other key intelligence agencies to follow the BND's example of moving to Berlin, but such deliberations have thus far failed to find majorities in Germany's federal state system. So for the time being the Federal Criminal Police Agency (BKA) and the Office for the Protection of the Constitution (Germany's domestic intelligence agency, BfV) have settled for mere branches located in the capital. This state of affairs is something Schuster, an experienced politician and a former police officer, can come to terms with: BKA and BfV may not have central offices in the government district, but each at least has a "strong arm" there.

Their headquarters will continue to be located in Wiesbaden and Cologne respectively – each some 600 kilometers (373 miles) away. Despite the distance, he didn't see disadvantages, said Schuster. The BND, however, would certainly benefit from breathing Berlin air: "Moving to the center of town will lead to mental change, too," he said. So the days when the BND was, officially, an "Accomodation for Civil Servants" in Pullach, south of Munich, are gone for good.