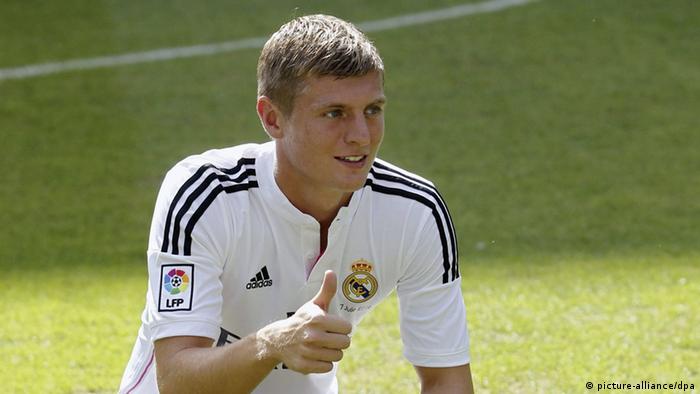 Bayern Munich confirmed on Thursday what had long been speculated: midfielder Toni Kroos has left the club and is to join Real Madrid as of the coming season.

Neither club has said how much the Spanish giants had paid for the 24-year-old playmaker, but the fee is believed to be in the region of 25 million euros ($33.8 million).

Kroos was officially unveiled in a ceremony at Madrid's Bernabeu stadium later on Thursday.

A statement released by Real to announce the transfer described Kroos as "a playmaker capable of finding the best option in any situation, with a vision of the game enabling him to help his teammates, as well as an impressive kick."

His now former club thanked Kroos, who joined Bayern in 2007 and made his first appearance in the first team at the tender age of 17.

"We are grateful to Toni Kroos for his time in Munich," Bayern chairman Karl-Heinz Rummenigge said in a statement posted on the club's official website.

"Together we had great achievements here and we wish him and his family all the best in Madrid with Real."

During his time in the Bavarian capital, Kroos won 11 trophies, including the 2013 Champions League, Bundesliga titles and the Club World Cup.

He capped this off as part of the national team side that won the World Cup in Brazil last Sunday, beating Argentina 1-0 in extra time, an achievement that also propelled Germany to the top of the FIFA rankings.

Victorious German team back in Berlin

The German football team has returned to Berlin, with the World Cup in tow. The players and coach Joachim Löw took to the stage at the Brandenburg Gate, letting their hair down at home after their Maracana triumph. (15.07.2014)